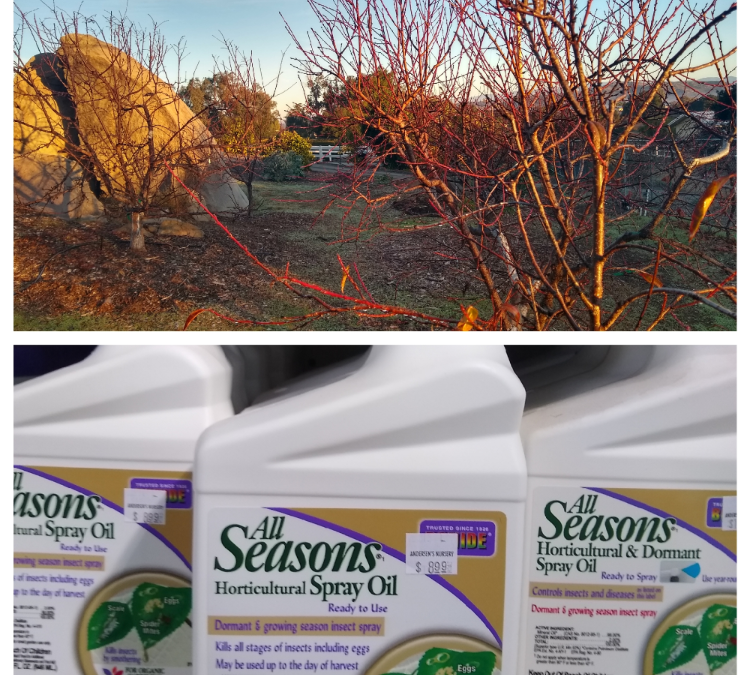 “Here’s a minimum spray program for mixed fruit tree plantings: In December or January, or after pruning, apply a dormant spray such as oil and lime sulfur to apples, pears, peaches, plums — all fruits except those noted below — for control of scale insects and other overwintering insects or insect eggs. Use a copper spray with oil on apricots. Do not use oil sprays on walnuts. Use a spray of copper (Bordeaux solution) or lime sulfur on peaches for control of peach leaf [curl] in late winter before buds break.”

This advice comes from the original Sunset Western Garden Book of 1954.

“In the past, peach leaf curl could be successfully controlled with lime sulfur fungicide or Microcop, a fixed copper fungicide. These products were removed from the retail market beginning in 2010. The only fungicide products left for treating peach leaf curl are those containing lower levels of copper (such as Liqui-Cop), copper soap, and the non-copper synthetic fungicide chlorothalonil (labeled by US EPA as “likely to be carcinogenic to humans”),” said Chuck Ingels of the University of California Cooperative Extension in his report on a 2012 Peach Leaf Curl Trial.

Furthermore, the products that are available today as dormant sprays for peach leaf curl appear to be less effective than the old products, as reported by Ingels in the above trial.

End of post? No, let me share why I have never done such spraying in the last fifteen years that I have been attentively growing deciduous fruit trees, as well as what the results have been. Maybe that is worth something in that it might help inform your decisions about dormant spraying.

Peach leaf curl seems to be the disease that can be sprayed for during winter and that irritates the most people so I’ll continue focusing on it. I’ve had peach leaf curl on many peach and nectarine and nectaplum trees over the years and yet I’ve never bothered spraying for it because, well, look at the fruit:

Last spring, my SpiceZee nectaplum had the worst leaf curl I’ve ever had on any of my trees, but still very few fruit were affected. In fact, last spring was the first time that I’d ever seen fruit affected by peach leaf curl on any of my own trees.

I grow my fruit trees for the fruit. Peach leaf curl may be ugly:

But I don’t eat the leaves, so as long as I get satisfactory quality and quantity fruit then I see no need to intercede.

Also, from experience I know that peach leaf curl infections vary from year to year. Last year they were very bad because of our abnormally wet spring. Infection also varies from variety to variety. Look at the nearly perfect foliage of the nectarine tree growing adjacent to the infected nectaplum tree:

I’ve also never bothered to spray for insects that might spend the winter on the bare branches of my deciduous fruit trees, such as aphids.

My young Flavor Grenade pluot tree had an infestation of aphids on its new growth at one point last summer. The leaves curled, and ants formed a highway running up the trunk to feed on the aphids’ honeydew.

I’d seen this happen on other plum and pluot trees in the past. I’d also seen it be really bad one year only for the next year to not have an aphid in sight. So I wasn’t worried. A tree’s growth is somewhat stunted by such an infestation but that means less pruning necessary. I see it as unattractive but not worth spraying for, especially as long as the fruit is not significantly affected, and it never has been.

Might the day come when I use a spray on a deciduous fruit tree during the dormant season? Maybe. And should that day come, I’ll share why and whether I found it worthwhile.