What to do in a Southern California garden in June 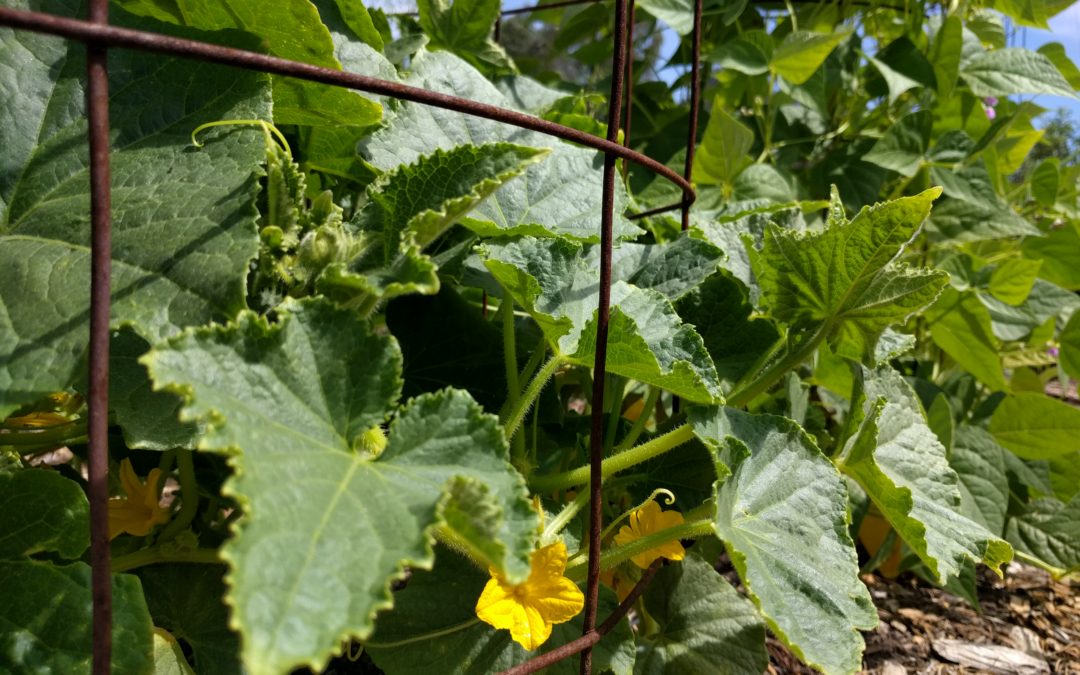 June is the lush month. June is the jungle month, particularly toward the end. The days are at their longest and they are warm, so the garden begins to look verdant and tangled in a most wonderful way. Squash vines overtake your walking paths. Corn stalks tower overhead. Cherry tomato plants drip with red fruit. Cucumber and beans climb up their cages and strings (pictured above).

I make sure to take pictures of my garden around the solstice in late June since it never looks more bountiful.

But there’s also a sense of urgency this month. It is your last chance to plant most of those warm-season vegetables. Put them in now or they won’t have enough time in the heat of summer to mature as large a crop. (The main exceptions are corn and beans, which can be successfully planted in July.)

Below are details on doings in the vegetable garden, some fruit tree thoughts, and a few other uniquely June opportunities:

– Plant seedlings of these vegetables: eggplant, pepper, melon, pumpkin, squash, tomato; if seeds of these vegetables are sown in June, especially later in the month, there’s a real risk of only getting a small crop before it cools too much at the end of the year since they take a long time to grow from seed to harvestable fruit

– Be aware of planting cilantro: sorry to rain on your salsa parade, but cilantro is not well-suited to growing in the summer in Southern California; you’d think it would grow well with other salsa ingredients like tomatoes and peppers, but it won’t; it will start to flower fast because of the warm weather so don’t expect an extended harvest; cilantro grows more slowly and harvests longer in the cooler weather of fall, winter, and early spring

– Sow or plant pole beans to be used as temporary, summer shade on east- or west-facing walls or windows by growing them up strings under an eave; you can also use grapes for the purpose of shading a house

– Consider growing your own Halloween pumpkins and decorative fall corn; now’s the time to plant those in order to harvest by late October; most years, I grow the colorful corn variety called Glass Gem, which I posted photos of here

– Plant avocado and citrus trees; they feel right at home in the warmth of late spring and early summer and soon prove it to you with a flush of new leaves, which gives you an immediate sense of success that you won’t get when planting in most of the rest of the year; if you plant an avocado, be sure to water it properly in it’s first few months: see my post “How to water a new avocado tree”

– Don’t fret over tomatoes that have blossom end rot (rotten bottom of the fruit); it happens often to the first fruits of May and June but not to the later fruits of summer; it also happens to certain varieties (e.g. San Marzano); there’s nothing you can do about it despite what someone selling a product might claim (it’s just a symptom of the cooler weather of spring/early summer); incidentally, if you do apply a product for blossom end rot this month, you’ll find that — voila! — it works: the placebo effect

– Water plants for “thrival” not mere survival; don’t make the mistake that I have in some past summers of being stingy with water on vegetables and fruit trees, which lowers production and defeats the point; if you scratch into the dirt around the roots of your plants, you’ll know for sure how much water they have access to, as I wrote about in this post

– Appreciate and observe the summer solstice (June 20): Have a late dinner out in the yard while you notice where the sun sets — isn’t it fascinating how far northwest it falls below the horizon on this day?

Thanks to the Supporters, this website has no ads disrupting your reading experience or influencing its content. Learn how you can support The Yard Posts HERE