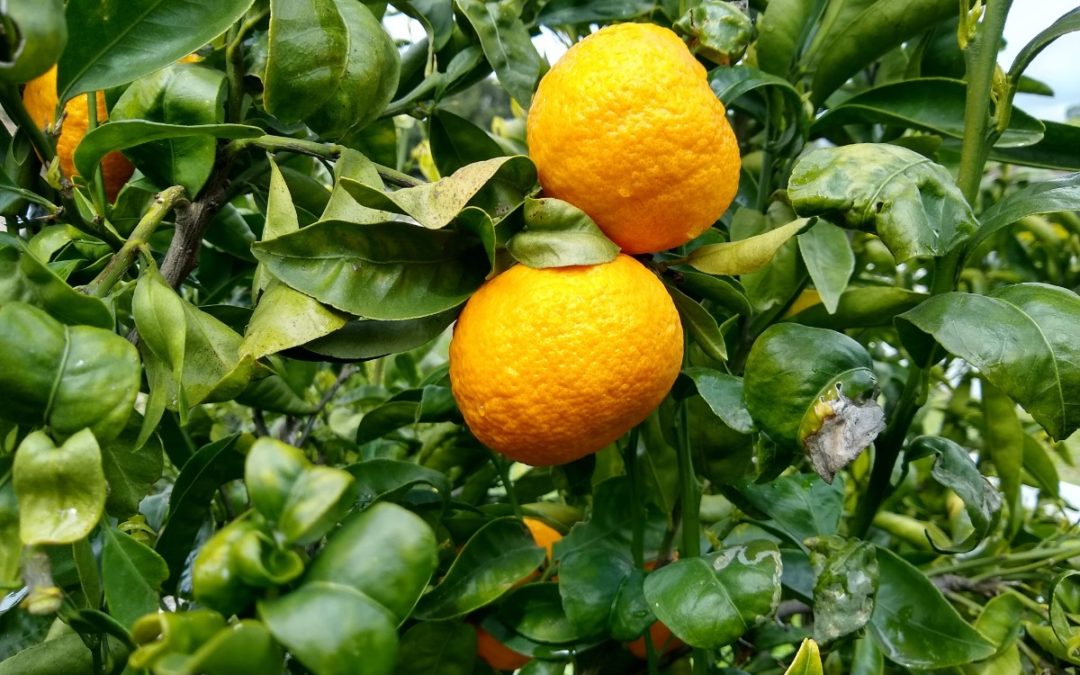 “If I only had one citrus tree to live on for my entire life, this is it,” said our guide through the collection of about 1,000 varieties of citrus selected from around the world. That’s quite a claim. But, coming from Ottillia “Toots” Bier, we would be wise to consider it. She has tasted the fruit of hundreds of citrus trees; I’d guess she has experience with as many types of citrus as anyone on the planet.

I was sufficiently impressed to plant my own Gold Nugget tree, from which my family has eaten a few hundred mandarins during this March, 2020.

Let me tell you more about the fruit and the tree of this variety of mandarin called Gold Nugget in order to help you decide if it is worth planting in your yard.

Once Gold Nuggets are mature, you can easily peel them with a single corkscrew motion, popping the pith at the core out of the bottom.

You would find Kishu or Satsuma mandarins even easier to peel than Gold Nuggets, but Gold Nuggets peel easily enough that my two-year-old daughter doesn’t ask me for help.

As you peel, Gold Nuggets release heaps of aroma and oil from the rind. It’s an intoxicating smell, but it does make your hands messier than with some other mandarins whose peels come off more dryly.

The segments of Gold Nuggets are easily separated, seedless and firm, bursting with juice. The flavor is rich but mostly sweet; it does not have the tang associated with some other mandarins such as Dancy.

Vigorous is the word that comes to mind when I think of a Gold Nugget tree. Mine was planted at the same time as some of my other citrus trees and it is on the same rootstock and yet it has grown a bit faster.

This might be in part due to the fact that its fruiting has alternated. Here in 2020 we are finishing eating a few hundred Gold Nugget mandarins from the five-year-old, five-foot-tall tree, but in 2019 it produced only three, three lonely pieces of fruit. The year prior, it had an abundance of fruit. Here it was in that year, 2018, three years after planting from a five-gallon container:

Farmers don’t like that Gold Nugget trees tend to alternate bear, and I imagine some home growers wouldn’t like this either. I don’t mind because I have other mandarin trees whose harvest season is at about the same time, such as Pixie. But if you are looking for a mandarin that produces fruit more evenly through the years, then Gold Nugget might not be your best bet although many mandarins alternate to a degree.

It is said, however, that the alternate bearing of Gold Nugget can be moderated through pruning.

We call Gold Nugget a mandarin, but technically it is a mandarin hybrid, as it has some orange in its lineage. In the 1950s, citrus breeders at University of California, Riverside crossed the Wilking mandarin with the Kincy mandarin, and both of those mandarins are actually mandarin hybrids. Wilking and Kincy both have King tangor as a parent, a tangor being a cross between a mandarin (tangerine) and an orange.

Here in March is only the beginning of the Gold Nugget harvest season. We are in inland San Diego County, and our Gold Nuggets start to taste good and peel well from March. (This is late compared to most other mandarin varieties, some of which mature as early as November.) Gold Nuggets will continue to sweeten and peel even more easily through spring and into summer.

For how long can Gold Nuggets hang on the tree and maintain quality? I’ve eaten some from a tree in Valley Center in San Diego County in September that were still very good. Toots said that she has picked fruit from her own tree in her Huntington Beach yard in October that was still “sound and good.” That Gold Nuggets store so well on the tree was a major reason that Toots called it her number one citrus (the other major reason being its outstanding flavor).

From my own tree, the latest I’ve had good ones is the end of August, but they taste their best around May and June. Only a few remain on my tree that long though. My routine is to give my kids the green light to pick Gold Nuggets at the end of February. This is how the tree looked soon after I let them at it this year:

They wiped out a few hundred mandarins in a month. Okay, my wife and I ate quite a few too.

(Note: As much as my kids love Gold Nuggets, they still slightly prefer Kishu mandarins since Kishus are smaller and incredibly easy to peel. See my post, “The best fruit tree for kids, and the winner is . . . Kishu!” But Kishu is an early variety so Kishu plus Gold Nugget makes a complementary pair of trees that can give you fresh mandarins from the yard for about half of each year — not considering alternate bearing.)

Here is video of parts of that 2012 Tour of the Citrus Variety Collection at UC Riverside (we arrive at the Gold Nugget tree at minute 42):

If you’re interested in buying a Gold Nugget mandarin tree, they are widely available at retail nurseries and garden centers throughout California. Also, Four Winds Growers carries them and can ship one to your door.