Dealing with squirrels in a food garden 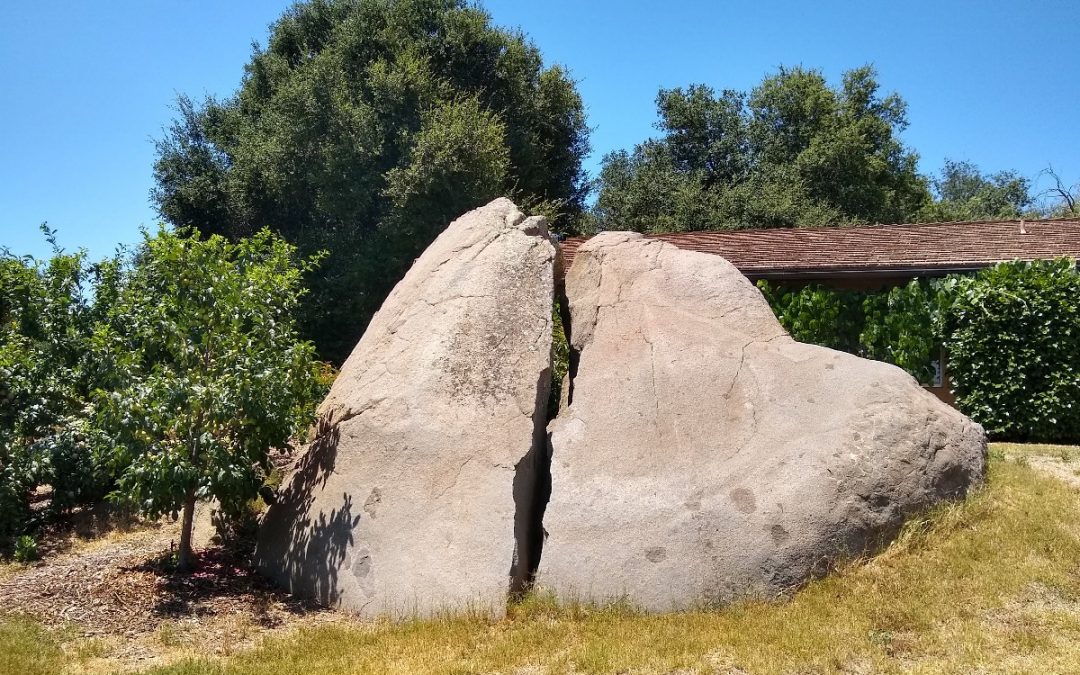 When we moved into our house six summers ago, no one had lived here for a few months, and squirrels dominated the yard. The boulder in front of the house (pictured above) had oranges filling its crack. I soon learned that this was the squirrels’ stash.

Over the course of the summer, the squirrels proceeded to strip the plum tree and every other tree that had fruit, as I scrambled to deal with them.

Here I’ll shortcut to the best solution I’ve found for dealing with squirrels in my food garden — a yard with vegetables, and fruit and nut trees. It’s the Squirrelinator trap. I wish I had known of it that first summer.

The Squirrelinator is a device that is exceptionally easy to use and highly effective. You set it on the ground, put a little food that squirrels like inside and around the trap (I use dry cat food or whatever the squirrels have been stealing from the garden), and a few hours later you return to find a squirrel or two trapped inside. It’s as simple and reliable as that, as far as my experience has been.

(I bought my Squirrelinator through the manufacturer, Rugged Ranch, via Amazon here.)

Let me list other methods I’ve used to deal with squirrels and how they compare. I still use some of these methods in addition to the Squirrelinator, and one of them might work better for you in your context.

Havahart traps work well in catching squirrels. I’ve caught dozens with them. I still use them. But you can’t catch more than one at a time; that is the main disadvantage compared to the Squirrelinator.

There is a certain satisfaction in shooting a squirrel that won’t stop pilfering your prize strawberries. I do shoot such squirrels with a pellet gun on occasion. Shooting is not a time-efficient way to deal with squirrels, however, and it isn’t even an option if you live in an urban area.

The fences and nets that exclude other animals from your food garden don’t work on squirrels. Fences and nets are great methods for dealing with deer, rabbits, and gophers, but squirrels can climb and dig and run so well that such barriers are ineffective unless they completely surround the garden, including overhead.

One exception is for certain fruit trees. It is possible to use a slick plastic or metal wrap around a tree’s trunk to keep squirrels out if the tree has no low-hanging limbs and has no high limbs that are close to anything else (like another tree, wall, or roof). If all of these features coincide, then a squirrel won’t be able to climb up the trunk wrap nor jump into the tree from the ground or elsewhere.

My trees are mostly not like this so such barriers are of little use in my yard. Most fruit and nut trees I see in other yards are also not candidates for this method, unfortunately. For example, my grandma has a very tall macadamia nut tree in her yard, but wrapping the trunk would be ineffective because the upper limbs are too close to surrounding trees. She gets very few macadamia nuts; the squirrels get hundreds every year.

What does this matter in terms of dealing with them? Not much, as far as my experience goes, except perhaps for where you set traps and baits (e.g. in trees or on ground). See more information at the University of California’s Integrated Pest Management pages for tree squirrels and ground squirrels.

So I usually trap the ground squirrels in my yard. But then what to do with the squirrel in the trap?

One day I saw a man releasing trapped squirrels on the side of a road near my house. That’s not legal. I used to drown trapped squirrels by dropping them into a trash can full of water, but I hated watching them struggle — even though I was angry with them for stealing my food — and this is now an illegal act as well. (See the UC IPM links above for details on legality.)

These days I kill the trapped squirrels with my pellet gun. I know of no better way.

What happens sometimes though is that I check a trap to find a squirrel already expired inside, apparently from heat exhaustion. This makes for a clean (bloodless) removal, but I don’t know how cruel such an end to life is in comparison.

Either way, using a plastic bag to pick up the squirrel (like you would with dog poop), and then turning the bag inside out around the dead squirrel is my preffered method of pick up for disposal.

I hope to find a better way to deal with squirrels. I continue to experiment. I’d love to hear from you if you can help here. I’ve yet to try out a few potentials.

It would be great if scary noises or automated sprays of water worked. I’ve never tried such devices because I’ve never heard of them working long term.

Apparently, certain traps that kill a caught squirrel are effective. This method I look forward to trying sometime because it would avoid having to kill a live-trapped squirrel. In fact, it seems like the perfect method for someone with a food garden in an urban neighborhood who can’t or doesn’t want to shoot the trapped squirrels. (See the UC IPM pages linked above for effective kill traps.)

I see some people using toxic bait stations for squirrels. These seem to be effective. I may try them someday although my experience using toxic baits with gophers leads me to be wary. I would never want to endanger neighbors’ pets or other wildlife.

If only we could coexist with squirrels, right? You either lose the fruits of your labor or you exclude them or you eliminate them from your food garden. Or you pay a farmer to eliminate them from his farm, and then buy your food from the farmer. It seems there’s no free lunch. Or am I missing something?

Managing rabbits in the garden

Other posts about garden pests