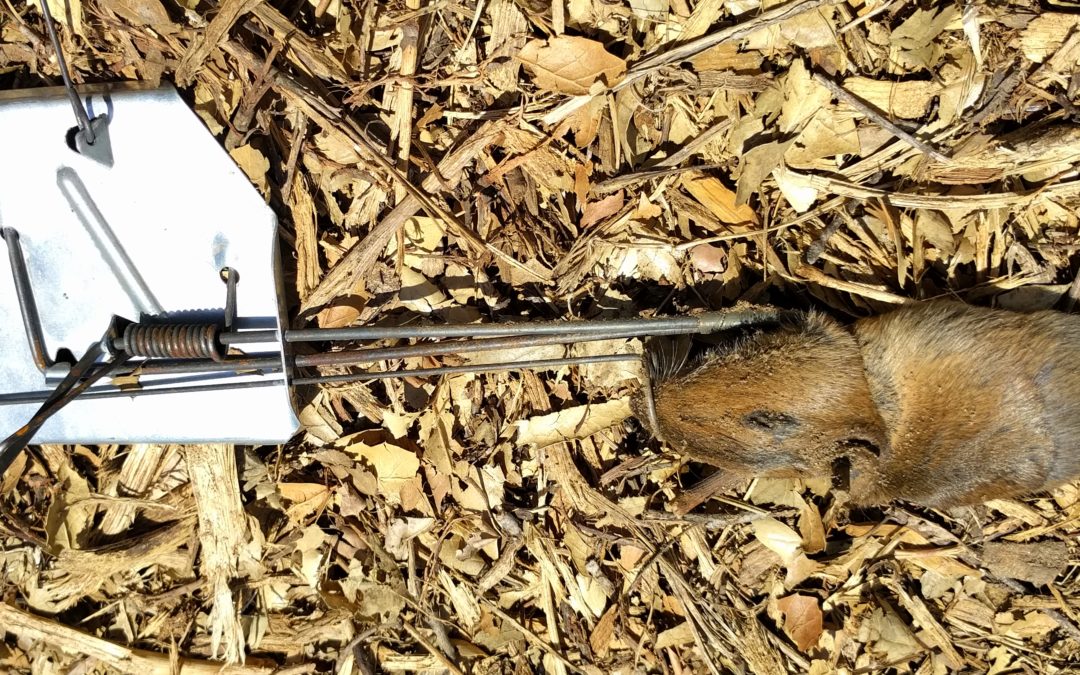 In my yard, the most damaging, relentless, and challenging pest to control has been gophers. Birds peck plums and squirrels may steal plums, but a gopher will kill a plum tree. While I haven’t lost any plum trees to gophers, I’ve lost other fruit trees and innumerable vegetables.

The cruelest attack by gophers has been to the Sharwil avocado tree that I planted over my son Miles’s placenta when he was born. I’ve now killed three gophers attacking that special tree over the past couple years. Most recently, I trapped and killed one with a Cinch trap. (See photo above.)

I’ve tried almost every method I’ve heard of to control gophers over the years. I’ve found trapping to be the best general method, and about a year ago I discovered the Cinch trap in particular and haven’t used any other method or trap since.

How the Cinch trap works

Here’s how I recently set a Cinch trap after I noticed this gopher mound in my strawberry patch. 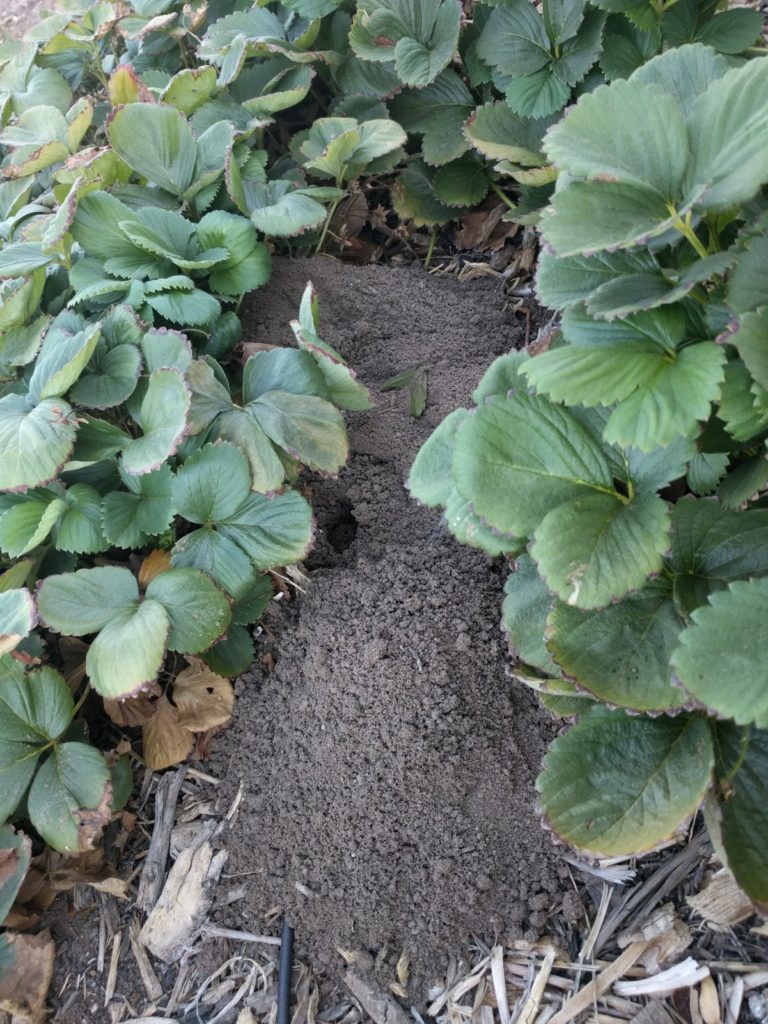 I poked my hori-hori knife into the mound and located the attached gopher tunnel, and then I cleared the dirt out of the tunnel. 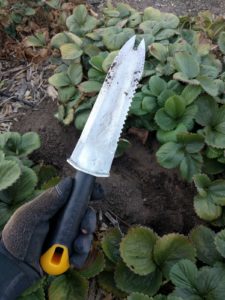 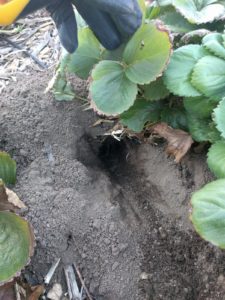 After setting the Cinch trap, I slid it into the tunnel. 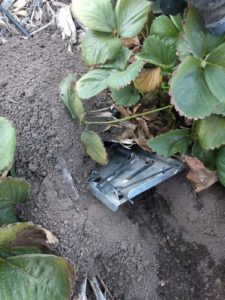 Here’s what the gopher might see from its angle inside the tunnel: 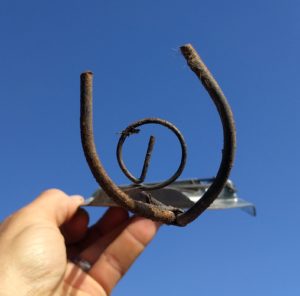 Those arms on either side are spring-loaded and will pinch tight to instantly kill the gopher when its nose pushes the center piece to release the spring action.

It so happens that I didn’t end up catching a gopher with this particular Cinch trap setting because my cat caught it first. She presented the head on our front porch that evening. If only she did that consistently.

Cats and other methods of gopher control that I’ve used have been less than satisfactory compared to traps in general, let alone the Cinch in particular. Here’s why:

1. Collapsing tunnels: gophers are digging machines, they don’t mind at all, they dig new ones immediately

2. Filling tunnels with water: nothing ever happened, it might be because my soil is so sandy and well draining

3. Strychnine poison bait: don’t get to see the baits effectiveness, can poison pets and wildlife unwittingly

4. Snakes: we’ve got them in our yard, but the evidence shows that they don’t eat enough gophers

5. Owls and hawks: we’ve got plenty of them in our neighborhood, but they don’t catch enough

6. Pellet gun: it’s very satisfying to shoot a gopher, but it isn’t a reliable method to control them in large numbers

7. Shovels: it’s also very satisfying to smash a gopher with a shovel, but they rarely show themselves above ground

Trapping is the best method

Traps have worked better than any of the above methods for me. Before using the Cinch trap, I used other pincher-style traps made by Victor and Macabee. I also used Victor’s Black Box trap. 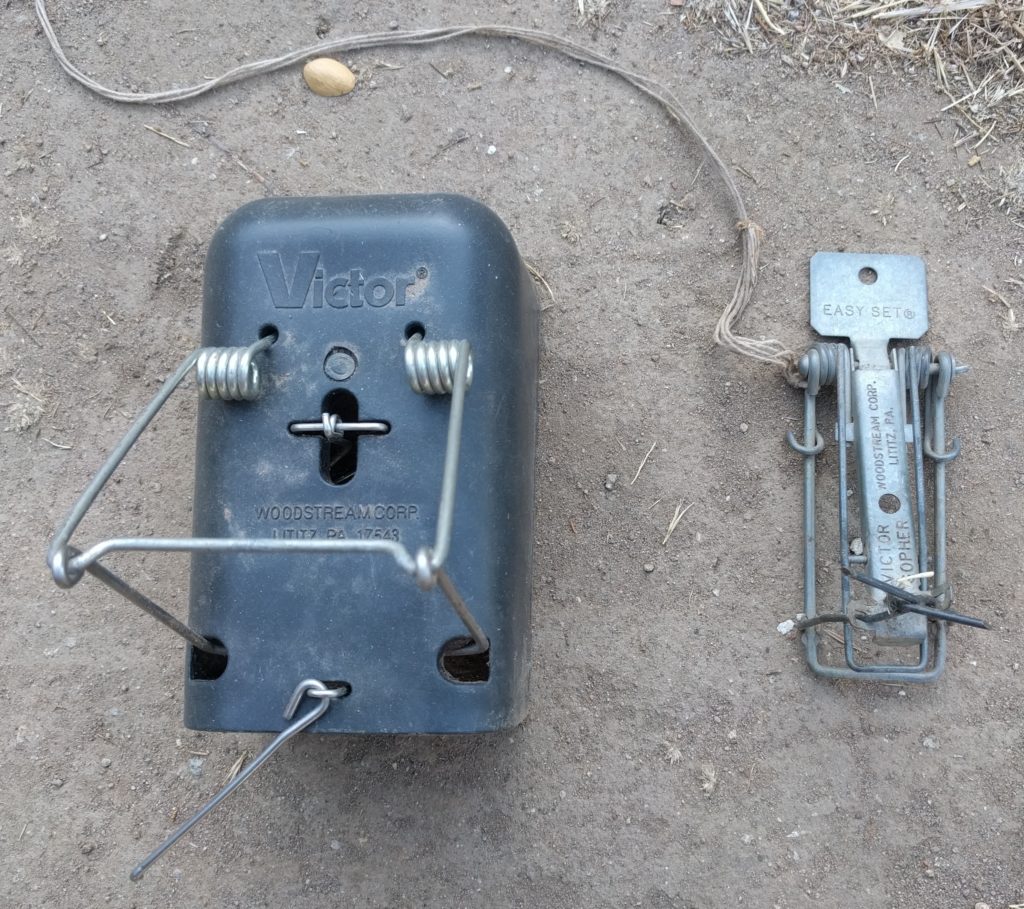 In general, I’ve preferred trapping as a method because you know without a doubt when you’ve caught the gopher, it’s not as time-consuming as some other methods (you set the trap and walk away while it does its work), there are no risks of collateral damage like with using poisons, and most importantly, trapping works. It gets the gophers.

Victor and Macabee pincher traps work, no doubt. I’ve killed many gophers with them. Nevertheless, I’ve found the Cinch trap to be superior in a number of ways, which is why I no longer use those other traps. Here are the reasons I prefer the Cinch trap:

1. Less digging: all you do is open up the gopher’s tunnel instead of excavating a giant hole in order to find the gopher’s horizontal runway

2. Fewer tools and other materials needed: with the Cinch you don’t need a shovel, a hole cover, or wire attached to the trap

4. Cleaner: rarely is there any blood with a Cinch catch, and releasing the gopher from the grip of the trap is easier too 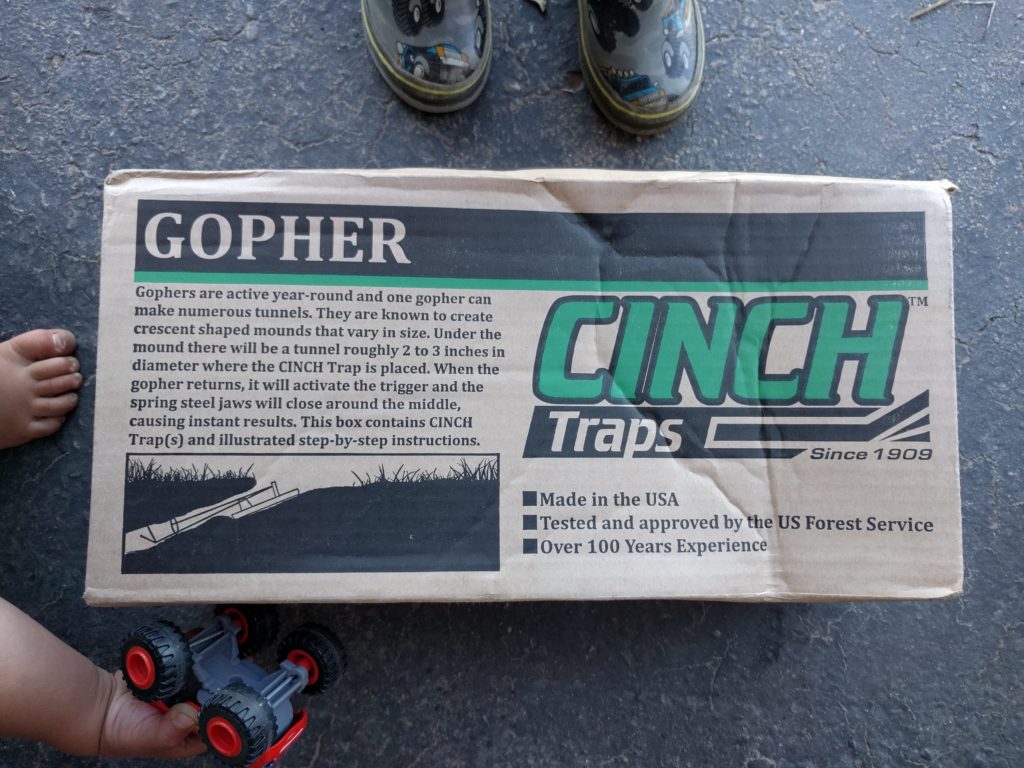 The Cinch trap is, in the end, only a tool. And any tool is no more effective than the tool’s handler. While I was catching gophers with the Cinch trap right off the bat, I’ve increased my effectiveness through doing or learning a few key things. Many of the most useful things I’ve learned have come through watching the videos of Thomas Wittman on YouTube and following his advice. Wittman owns a company called Gophers Limited based in Santa Cruz, California, and the guy knows what he’s doing.

From Wittman, I’ve learned how to hold the trap optimally while setting it (which requires some strength), how to position it in the tunnel, and where to poke into a gopher mound to find the tunnel in the first place. To do that poking, I’ve bought a hori-hori knife as Wittman suggests, which helps open the gopher’s tunnel to the right diameter so that the Cinch trap fits snugly in it. Prior to buying the hori-hori, I used a trowel or stick or my hands, all of which didn’t work as well.

I’ve also learned from Wittman not to quit on a mound if the trap doesn’t work the first time. If the gopher plugs the tunnel, just open it up again and reset the trap. I’ve now caught many gophers by resetting failed first attempts.

Where to buy Cinch traps

So maybe you’d like to try out a Cinch trap in your yard? You can buy one directly from the manufacturer through their website, Cinchtraps.com. This is where I bought my last couple traps. You can also get them off Amazon here, as well as through the Gophers Limited website. Be sure to buy the small size, which is suitable for trapping pocket gophers in California.

(Just to be clear, I have no relationship with Thomas Wittman, Gophers Limited, or Cinch. I’m sharing my experiences here only to help others who are struggling with gophers damaging their vegetables and fruit trees like me.)

Also, if you’d like to get a hori-hori knife, don’t bother paying a lot if you’re just using it for gopher trapping. I bought the Fiskars hori-hori knife in the photo above at Home Depot for about $15. There are lots of prettier and more expensive ones around, but you don’t need such a thing for setting Cinch traps. You can find the hori-hori knife I have through Amazon here, and you can see a slightly different one at Gophers Limited here.

Lastly, if you’d like to do some deeper reading on how gophers dig, breed, and feed, this University of California page can’t be beat. Good luck getting those gophers!