Managing rabbits in the garden 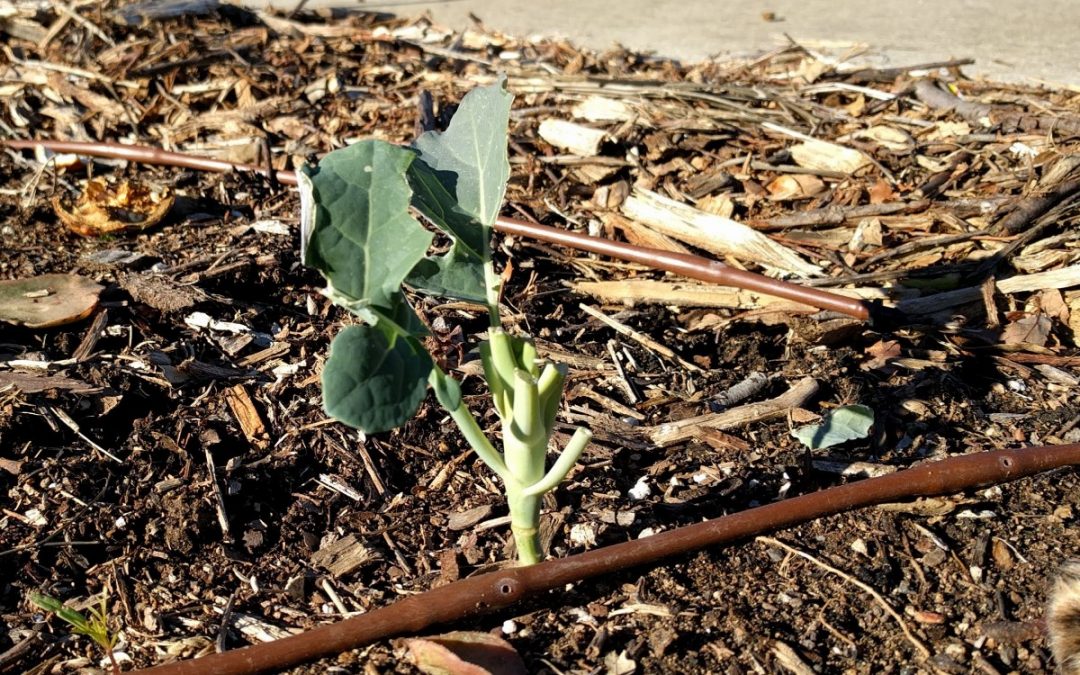 Five Octobers ago I planted 24 seedlings of broccoli, cauliflower, cabbage, and brussels sprouts. By mid-November only two hadn’t been eaten down to stems by rabbits. This was my first fall in a new garden and I hadn’t known how much those cute cottontails like brassicas.

This post is about how I’ve learned to manage vegetable and fruit-tree gardening in a yard and neighborhood of plentiful bunnies.

There’s no doubt that the ideal way to control rabbits is by physically excluding them from your garden area. Unlike with other critters such as squirrels, putting up barriers to bunnies is easy. All it takes is fencing that is a foot or two high (I’ve always had success with only one foot high, but I’ve heard others suggest higher). That’s for cottontails, but if you’re dealing with the bigger jackrabbits you need your fence a little taller, maybe more like three feet. And the mesh should be about one inch — so think of the classic chicken wire, also called poultry netting.

You may want to also bury the fence a few inches because bunnies might dig to get under it. I actually never bury the bottom of my fencing more than an inch and I’ve never had a bunny dig under, but maybe I’ve just been lucky.

While I just said that the ideal way to control rabbits is by physically excluding them from your garden area, the truth is that this is not exactly what I do in my own garden. Just as a mere knee-high fence is enough to keep out a rabbit, it is also enough to prevent my toddler from entering the garden and picking as many peas as she wants, whenever she wants. And it is the goal of my children having unhindered access to the garden which takes priority.

So I use a combination of other methods, including placing small fences around certain individual plants. This sounds tedious on its face, but in practice it is less so because only certain plants need protection and none need protection for their entire lives.

I can’t guarantee that your rabbits will have the same palate as mine, but they’re probably similar. The rabbits around me love to eat . . . broccoli, cauliflower, cabbage, cauliflower seedlings.

The rabbits like to chew on young grapevines, small citrus and avocado trees, and lettuce and sweet potato plants.

Never have I seen evidence of a rabbit in my yard showing interest in most everything else, including tomatoes, potatoes, onions, garlic, asparagus, peppers, strawberries, peas, basil, banana plants, melon vines, and squash.

Another thing to keep in mind is that, as I alluded to above, rabbits prefer succulent young growth. So, for example, rabbits will eat a young cabbage plant down to the ground; however, a mature cabbage plant two feet away will go untouched.

This means two practical things: you only need to protect most plants when they’re young, and your fence guards need not be large in diameter. I make mine for vegetables about one foot wide (and one foot high).

I make mine for fruit trees more like two feet wide (and also only one foot high). I buy rolls of chicken wire that are two feet tall and cut them in half, in addition to cutting them to length for trees versus vegetables.

An additional tack I take with my vegetables is in planting the crops they dislike along the garden’s perimeter while locating plants they love toward the middle. It does work to an extent.

The eaten broccoli seedling at the very top of this page as well as the stub of a cabbage seedling above were both on the outer edge of my garden. (I hadn’t put little fences around them because the rabbits had been leaving them alone until last week.)

If you know where your rabbits sleep during the day, then you can make the most of this method because you’ll know where they arrive in your garden each evening. I know exactly where my rabbits come from (mostly my neighbors’ yards).

Our cat eats rabbit from time to time. Mostly, unfortunately, it’s a rabbit that I have caught for her. But occasionally she can be found with rabbit prey.

But cats along with other predators such as coyotes and hawks cannot be depended on to protect your garden from rabbits. Encourage them, but don’t count on them.

Though it may seem that a humane thing to do would be to trap rabbits and release them in a nearby canyon or up in the hills, this is both illegal, time consuming, and I’d guess would lead to the displaced rabbit’s being successfully preyed upon during its first day in the new environs anyway. (“According to California Fish and Game Code, it is illegal to release [rabbits] in other areas without a written permit.” This comes from the University of California’s Integrated Pest Management webpage about controlling rabbits.)

You can make use of traps in order to then easily dispatch a rabbit though. Rabbits are easily trapped. I’ve used a Havahart trap like this one along with bait that is anything they’ve been eating from the garden lately.

There are kill-type traps that apparently work even though I have no experience using one.

I love the idea of repellents, but I’ve never tried any because I’ve yet to hear anyone report that they work well, especially on vegetables. (Please let me know if you have anything different to report?)

At times in the past I’ve resorted to the most distasteful method of dealing with rabbits, which is by shooting them. I use a pellet gun (also called an air rifle). This is not plausible or may not be legal if you live in an urban area, I understand. But if you don’t, then keeping the rabbit population in check by shooting some every now and again does help.

You simply hunt at dusk or dawn. If it’s too dark to see well, then use a flashlight and the rabbit’s eyes glisten red. Aim for right behind the eye.

I’ve always hated shooting rabbits, so to assuage my conscience as well as to feed my belly I’ve occasionally cooked them up for dinner. See my post, “Eating the rabbits that eat my garden.”

You may have noticed that there’s not a single photo of a rabbit in this post. That’s because I’ve been unable to catch an image of one lately; there aren’t as many around as there were five years ago in my yard. Not that rabbits are bad. I enjoy having some around still, especially now that I feel like I know how to keep their damage to a minimum.