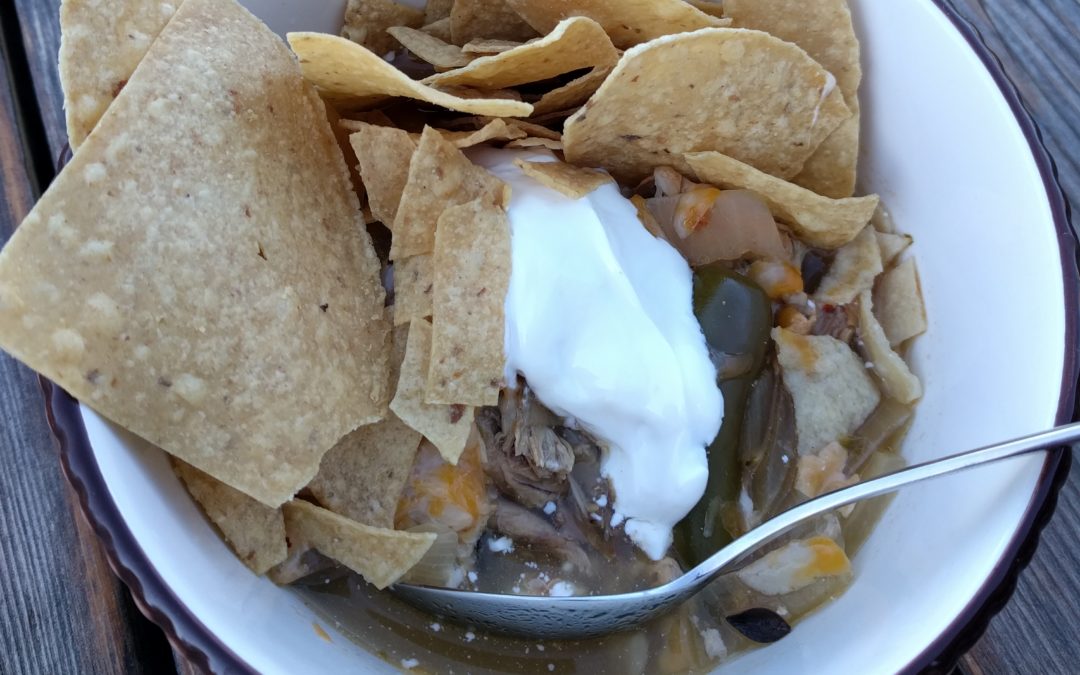 I shot the second rabbit, but not as cleanly as Chance had shot the first one. It was bleeding on the driveway next to the passion fruit vine and the vegetable garden, from which it had occasionally dined, and I felt terrible.

Chance felt bad too, which is why he is my favorite hunter. Before I could put my gun down, Chance had run over and picked up the bunny and begun putting it out of its misery and processing it on the spot. This wasn’t his first rodeo. He grew up harvesting his own meat. Yet he has as big a heart for animals as anyone I know. And the only reason either of us was out in the yard killing a couple of rabbits was to make dinner for our families. 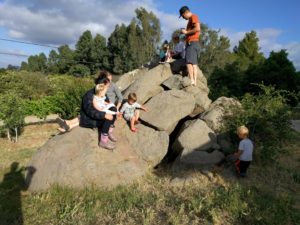 That sounds far more pious than it deserves. But it’s pretty much the whole truth, except that getting the rabbits would also serve to protect the lettuce in my vegetable garden that they had been munching on lately. This was beyond “Integrated Pest Management.”

The day before, Chance and his wife Katie and their children had arrived from Oregon to stay with us for a few days, and upon their arrival they noticed the numerous cottontails in our yard. They eat my vegetables sometimes, I said. There are so many of them.

A few months back, my friend Erik had come over and for the first time we shot one and cooked it up, but it didn’t taste as good as it should have: my fault. Erik had done the shooting and processing well; I had fouled up the cooking.

Someday, I want to slow-cook one with spices and vegetables from the garden, I said to Chance. He really liked that idea. Chance is first and foremost an eater, not a hunter. If you visit his house, yes, you’ll see a giant rack of elk antlers above his porch, but you’ll also be served elk for dinner.

I’ve always hated killing garden pests. So over the years, I’ve tried to find ways to make use of them, to turn them into resources. The earwigs and pill bugs are now prey for our chickens. Most gophers I catch I feed to our cat. I’m still unsure of what to do with ground squirrels, but maybe someday I’ll use them like the two rabbits Chance and I got on this day.

After we finished cleaning the rabbits, we put the meat in plastic bags and tucked them into the fridge. We both agreed that cooking and eating them the next day would allow us to enjoy the taste more because it would provide distance from the distasteful sights, smells, and emotions of killing the rabbits.

So it was the next morning that Chance started loading the meat into the Crock Pot, and I went outside to gather Anaheim, Serrano, Shishito and Poblano peppers from the garden. We used my wife’s Pork Chile Verde recipe as inspiration. Chance added the peppers along with some onions, garlic, tomato, oregano, and sage from the yard. The sage he used was white sage, Salvia apiana, native to our neighborhood. I wasn’t sure it would taste good as I’d never cooked with it. But Chance added some, set the Crock Pot temperature on low, and we all went to the beach.

When we returned late that afternoon, the kitchen smelled rich. In the evening we served the stew in bowls and added tortilla chips, and then topped it off with a little cheese and sour cream. We ate our rabbit tortilla soup in front of the house, right next to the garden that had grown it. It tasted far better than any of us expected. The only criticism was that we had cooked the rabbits nearly whole, and so there were quite a few small bones to pick out as we ate. The flavor and texture, however, had nothing to be improved.

Some days later, after Chance and Katie and their children had flown back up to Oregon, my wife and I reflected on the rabbit tortilla soup meal and joked about the way a trendy restaurant might present it on a menu: wild caught, sustainably harvested, organic, all natural, local, heirloom, artisan, pasture raised, yard-to-table. Gag. And how much they would charge!

Meanwhile, when I told my sister about what we’d eaten that day she said she wouldn’t have been able to eat it. “I just feel sad for animals,” she said. “I don’t want to know that my meat ever had a face.” 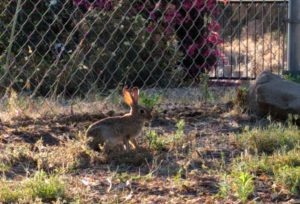 I understand, I said. I think we’re supposed to feel sad any time we kill an animal. Buying ground beef at a grocery store precludes us from feeling sad about the fact that someone had to kill a cow to make that ground beef, and at least once in our lives — if we’re going to be meat eaters — we ought to kill one of the animals that we eat so that we can feel that sadness. And perhaps we’ll eat higher quality meat from then on, and perhaps we’ll eat less meat too. Both are probably good things.

(I’m not interested in grossing you out, but if you want to see this photo of Chance’s handiwork you can click it to enlarge.) 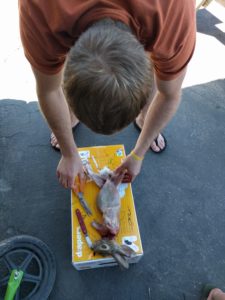 Wow, this rabbit tortilla soup was becoming more significant by the day. Originally, it was just a convenient and economic meal, since we’d gotten all of the main ingredients from the front yard, and it put to use a garden pest. It was a little adventurous too. And then it started to seem like such a good meal, morally, if you’ll compare it to most other meals that include meat. My sister reminded me that there was sadness in it, as we’d had to take a couple of animals’ lives.

I hadn’t grown up hunting like Chance. I grew up not really making the connection between the chicken my mom made for dinner and the hens my grandparents had in their backyard. I wonder how my children will look back on their growing up in my backyard.

A couple days ago, I was adding some rabbit leftovers to a burrito when Cass, my three-year old son who loves to help me cook, asked, “Is that the rabbit that Uncle Chance got?”