What are root knot nematodes? 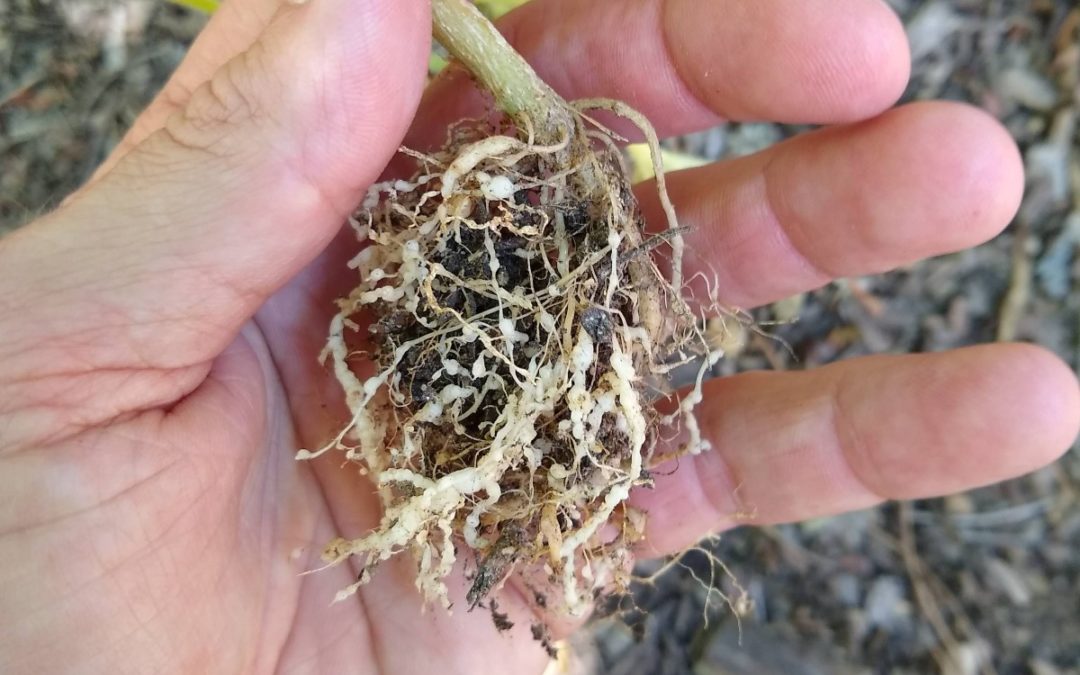 I planted cucumbers on June 19 and expected them to take off in the warm weather and soil, but they kept wilting in the noonday sun. So I watered more. They continued to wilt every afternoon. When they weren’t wilting, they were barely growing. Finally, I yanked one plant out of the ground to check its roots and it all made sense.

Swollen roots with knots here and there, a perfect example of damage from root knot nematodes.

What are root knot nematodes?

Root knot nematodes are microscopic worms that live in the soil and feed on plant roots. They insert a mouthpart called a stylet into a root cell and suck out nutrients. This causes swelling (“knots”) and impairs the root’s ability to take up water such that even if there is plenty of moisture in the soil, a plant will wilt.

The knots on the roots also impair the ability of the roots to transport nutrients up to the plant’s leaves. In a previous garden about ten years ago, I had a bed of peppers that were stunted and yielded poorly. They didn’t wilt; they just didn’t grow well. Initially, I guessed it was lack of soil fertility, but toward the end of the summer I pulled the plants out to discover the nematode knots all over the roots. So even in fertile soil, an infected plant won’t be able to use the soil nutrients like it otherwise would.

Root knot nematodes prefer warm, moist, and sandy soil, according to this page on nematode management guidelines from the University of California. That aligns with my experience. All of the nematode infections that I’ve observed have happened during summer and have been in sandy or loamy soil.

How to deal with root knot nematodes?

What can you do about these pathogenic critters? First, look at this curious sight:

This is the vegetable bed where the infected cucumbers were. There were three plants that I removed near that blue bucket. Remaining in the bed are basil, carrots, green onion, kale, watermelon, and cosmos flowers in the back. Why aren’t they wilting? Are they not also being attacked by the root knot nematodes?

I dug around to check. The roots of the basil plants looked perfect, showing no swelling or knots. Some plants are not hosts for root knot nematodes. In other words, for whatever reason, the nematodes don’t feed on them. This page has a list of nematode host plants and basil is not listed.

Corn is the only other common summer vegetable that is not listed as a host, but corn is listed as a host on this page from North Carolina State University. I’m going to grow corn in a bed that I know has root knot nematodes to find out.

Right next to the cucumbers was an Arava melon plant that had also shown some wilting. I pulled it up to find lots of knots on its roots.

But next to this Arava melon was a Crimson Sweet watermelon plant which was growing fine. I dug around its roots and couldn’t see any knots.

It has been observed that some varieties of host plants are more resistant to nematodes than others. On a plant’s tag or seed packet you’ll find the letter “N” designating resistance to root knot nematodes.

Certain tomato varieties, for instance, might be known to be resistant to nematodes and more. The label might read “VFN.” That means resistance to verticilium wilt, fusarium wilt, and nematodes.

(Update summer 2021: Hoping to find a cucumber variety that would prove resistant to root knot nematodes, but finding none with such resistance labelled, I planted Alibi, Summer Dance, and Sweet-Slice. All were claimed to “exhibit good disease resistance” generally. Alas, all turned out to get highly infected with root knot nematodes. No luck.)

The carrots in that bed haven’t grown as well as some of my other carrot sowings, so I wasn’t surprised to find some nematode knots when I pulled them up.

The carrots in this bed are one of my later sowings, done in April. It’s possible that had I sowed the carrots in January results would have been better. The soil is cooler in January than in April — and especially compared to here in July. And as that page from the University of California notes, root knot nematodes thrive in warm soil. In fact, it says that at soil temperatures below 64 degrees the nematodes cannot penetrate roots at all.

What to do now with this bed that is populated with root knot nematodes? Can I get rid of them? Doesn’t seem possible. But there are things that I can do to keep the population down and the future damage low. Planting the bed to non-host plants and resistant varieties will reduce the population because it gives the nematodes little to feed on.

An extreme version of this approach would be fallowing the bed — that is, planting nothing. Without any roots to feed on their numbers will diminish.

However: “Nematodes can survive for a year or more in soil as eggs or cysts,” says the California Master Gardener Handbook. So, even through fallowing, you’re not expecting to eradicate the nematodes, but only to reduce the population.

Turning the soil before or as you fallow is said to help. “Fallowing is more effective if soil is plowed and exposed to sun,” says the UC pest management guideline page for root knot nematodes.

There is one final practice that can reduce the population of root knot nematodes in that bed, which is soil solarization. This entails laying a plastic tarp over the soil to heat it up so much that it kills the nematodes. The plastic tarp should be left in place for 4 to 6 weeks during the hottest part of summer. Even then, it is effective only in the upper level of soil.

Keep root knot nematodes in mind this summer if you see that a vegetable plant is growing slowly and wilting often even though you think you’ve given it enough water, or if a plant is not growing and yielding as well as you think it should. Dig around to check its roots. If you see knots, then you’ve found the culprit.

What to do then? Plant non hosts or resistant varieties; plant in that area only at cooler times of year or plant summer vegetables as early as possible; fallow the area; and possibly solarize the soil.

By the way, no need to feel sorry for me and my diseased cucumber plants. Luckily, some Green Fingers in another part of the garden that I planted earlier are still producing well. The kids definitely aren’t starving.