Avocado rootstocks: What do they matter? 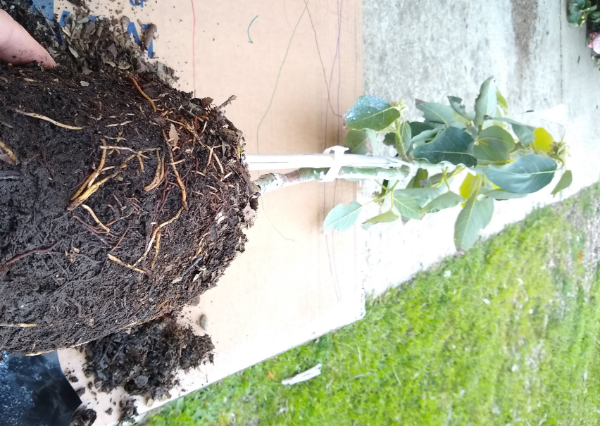 Rootstocks are mysterious. They do their work hidden, underground. Yet, their influence on the trees above ground is real and measurable.

For example, some rootstocks have demonstrated that they can induce the tops to make more than twice as much fruit compared to other rootstocks. This was first shown back in the 1980s and 1990s in a trial in Orange County comparing Hass on ten different rootstocks. (See “Avocado Clonal Rootstock Production Trial: A View after 8 Years.”)

But more relevantly, it has been shown in an ongoing trial in Ventura County comparing Hass, Lamb, Carmen, GEM, and Reed on nine different (newer) rootstocks. (See “Scion yield by rootstocks” — slide 44 — by Mary Lu Arpaia in this presentation.)

Twice the amount of avocados, just by using one rootstock over another? That is a real, measurable, and edible influence.

Every time we plant, we should bear in mind that we are planting two trees in one (assuming we’re planting a grafted tree). Are we planting desirable varieties on both the top and bottom? The variety that we have as our rootstock should suit the particular growing conditions in our yard (or on our farm), as far as possible.

I admit that only recently I have acknowledged the importance of rootstocks and acted upon that understanding in what I choose to grow. I still have a lot to learn. Nevertheless, here I share some of what I think might help your avocado growing.

I’d guess that most of the avocado trees planted by home gardeners in the last decade or two are growing on Zutano seedling rootstocks. That is, the nursery planted a seed from a Zutano avocado, then grafted a scion variety (Hass, for example) onto that Zutano seedling tree. Hass has the leaves and fruit on top; Zutano seedling has the roots on bottom. This is my guess because I’ve been told by many nurseries in Southern California that they use Zutano seedlings for their rootstocks for trees grown for home gardeners. (Although I know that some nurseries also use G6 seedlings, and Topa Topa seedlings were commonly used as rootstocks in the past.)

Why Zutano? One, it’s a variety that has proven to make a decent seedling rootstock for our general California growing conditions, which include our soil types, our temperatures, our disease issues, and our water quality. Two, Zutano seed is readily available since many avocado farmers use Zutano trees to pollenize their Hass trees, and there is almost no market for selling the Zutano avocados for eating.

I have a number of avocado trees of different varieties on Zutano seedling rootstock. Most of them perform decently, some perform very well, some perform poorly. It’s impossible to know exactly what part the rootstock plays in the performance of each of my trees, however, as they are different varieties growing in the variable settings of a typical home gardening situation.

A better circumstance in which to discern the influence of a rootstock is through a scientific trial where many trees made of the same rootstocks and the same scion varieties can be observed growing in a relatively uniform farm setting (no shade from a house on one tree, no big pepper tree with roots competing with another tree, etc.).

In one such trial in Ventura County, Zutano seedlings were compared to 12 other rootstocks. The Zutano seedlings performed the worst in almost every category: most leaf burn and/or heat damage, highest tree mortality, and lowest fruit production. (See Gunderson trial in this presentation.)

There is no overall best avocado rootstock

What has been found in rootstock trials is that, as Greg Douhan once put it, “No rootstock produced thus far will perform well under all conditions.” Douhan lead the avocado rootstock breeding program at U.C. Riverside for a time. What breeders like Douhan do is try to find rootstocks that perform well when faced with specific challenges, such as soil infected with Phytophthora cinnamomi, the microorganism that causes the disease called root rot, or salty irrigation water, or high heat, etc.

Then a grower can choose to buy avocado trees grown on rootstocks that are capable of growing well and fruiting well in his particular conditions.

Rootstocks have been bred or discovered which perform better than others against the challenges of particular growing conditions. For example, a rootstock called Dusa was discovered in South Africa growing well despite being rooted in soil infested with Phytophthora cinnamomi. Dusa is now widely used as a rootstock in California because it has also shown tolerance to root rot here.

But the Dusa rootstocks have not been created through growing seeds from Dusa avocados.

As Greg Douhan explains, “Seedlings produced from seeds gathered from [root rot] resistant or tolerant trees usually show little resistance.” Therefore, rootstocks like Dusa are cloned, that is, they are grafted just like the tops of avocado trees are grafted. Except that after grafting, the Dusa branch is then forced to make roots so it can become a rootstock.

(Rootstocks are actually clonally propagated in a few different ways — including tissue culture — but here is an illustration of one of the traditional methods on the Brokaw Nursery website.)

Here in California in 2021 there are a handful of rootstocks that nurseries currently produce clonally, and each of these rootstocks has been shown to perform better than others in particular ways or against certain challenging growing conditions. In addition, the University of California continues to breed, test, and release new rootstocks. Breeding programs in other countries also develop rootstocks that make their way to California.

I made the table below in order to help us see, at a glance, which rootstocks have demonstrated good performance in specific conditions or for specific aims. The trial or evidence for each listing in the table is cited with a number and noted at the end of the post.

Notes on the table

“Salinity” is defined as electrical conductivity (EC) of water of 1.5 or higher, as was used in the trials cited.

“Heat” is defined as temperatures over 110 degrees F, as was reached in the July 2018 event used in trials cited.

“Lime-induced chlorosis” is where a tree’s leaves yellow and growth is stunted due to high soil pH (8 or above).

“Production in clean soil” means high fruit yield in soil that is not saline or infested with root rot.

“Efficient production” means the most fruit on the smallest tree canopy.

I haven’t included cold tolerance because I’m not aware of any rootstock that has been shown to confer cold tolerance on the scion, not in my own personal observations nor in those of others. (For example, see the comments of Ben-Ya’acov here.)

However, the cold tolerance of rootstocks themselves are noted and ranked in this excellent table on avocado rootstocks in the book “Avocado Production in California.”

Some of the rootstocks listed in my table are under patent while others have not even been released yet. I still listed the unreleased varieties because some are predicted to be released and available soon.

Where to buy avocado trees on clonal rootstocks

That being said, avocado trees on any clonal rootstock are difficult for a home grower to find. Most nurseries that propagate them only sell in quantity (usually a minimum of 20 trees). I hope this changes in the future, but that’s the reality as of now. The one nursery that I have experience with that sells avocado trees of many varieties on clonal rootstocks to home growers is Subtropica Nursery in Fallbrook, San Diego County.

We don’t need to cut down our trees on seedling rootstocks just because trees on clonal rootstocks generally perform better in trials. All rootstock varieties originated as seedlings, and it’s even possible that you have a seedling rootstock under a tree in your yard that is better than any clonal — highly unlikely, but possible.

I leave you with an image that illustrates the difference a rootstock makes. These are three young Sharwil avocado trees in a friend’s grove. They are growing on seedling rootstocks that he planted and grafted himself on the same day a few years ago.