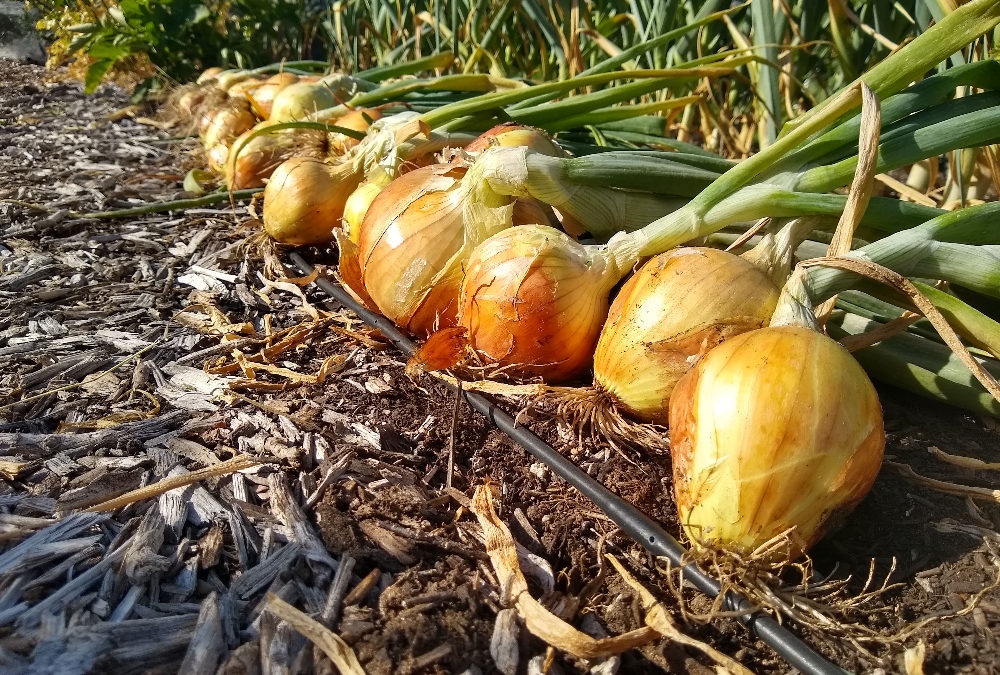 Timing. There’s not much to growing onions successfully in Southern California beyond timing.

If you sow the seed or plant the plant at the right time, you’re almost guaranteed a nice bulb to eat. So many times I’ve heard people say their onions didn’t grow well, and when I inquired further I always found out that it was a matter of bad timing.

It’s not your fault. It’s the seed packet’s fault:

As a general rule, disregard the directions about timing on seed packets. They’re usually written for gardeners in the Midwest, the Pacific Northwest, the South, New England, anywhere but Southern California.

Checking my notes from past years, I see that I got good onion crops from sowing as early as September 17, and as late as November 15. But most of my good onion crops were sown in October. These sowings I transplant into the garden ground 4-6 weeks afterward. So if you’re buying seedlings at a nursery, you’d that find good planting dates run from October through December.

The latest I’ve ever planted an onion crop that turned out well was January. The problem with planting in January or later is that the bulbs usually don’t get as big.

Why is it that these dates work well? What happens is that onions start growing during the mild fall weather and look like blades of grass.

Through winter they expand to reveal the tubular shape of their leaves.

Come spring, just above the dirt, the bulbs form. The bulbs are actually a bunch of fattened onion leaves that are — instead of green — a white or red or yellow color.

Onions are photoperiodic, which means that they respond to how long the days are. In the spring, the days are longer and the onions respond to that by forming bulbs.

Once bulbs are full size, the green tops start dying; they become yellow and often kink and topple over.

Time for harvest. Here is my harvest of ‘Madalyn’ yellow onions in May of 2021.

That’s how the life of an onion plant is supposed to proceed. If, however, you sow onions at the wrong time — in the spring as seed packets often suggest, for example — then the plants will grow just fine, yes, but they won’t make the big bulbs you’re hoping for.

I usually grow my onions from seed these days because the varieties available are more numerous and often higher quality than what is available at the local nursery, and also I can be in better control of my planting dates when I sow my own. Yet I’ve also had lots of success when I’ve bought onion seedlings at a nursery so that’s a perfectly viable option too.

Can we grow “long-day” onion varieties in Southern California? You may have heard that we can’t. Onion varieties are categorized as short, intermediate, or long day — referring to the daylength at which they will respond and form bulbs.

The higher your garden’s latitude, the longer the daylength is in spring. The story goes that if you’re gardening in the southern part of the U.S. you can only grow short-day varieties whereas if you’re up north you grow varieties categorized as intermediate or long day.

But I haven’t found this to be true. I’ve grown long-day onion varieties such as ‘Walla Walla’ and ‘Ringmaster’ with good results. And I know others who have too. (A few years ago, I wrote this post about it: “You sure can grow long-day onions in Southern California.”)

Onions can grow surprisingly close to one another. Just picture how big you want the bulbs to get and then space the plants accordingly.

Rather than evenly spaced rows, for the last few years I’ve been keen on planting onions in groups. I prefer groups of three. Groups of only two waste space while groups of four end up being so crowded that some bulbs don’t have enough space to fully expand. Groups of three are optimal.

If you buy seedlings at the nursery, you’ll find them in clumps of dozens within each six-pack cell. You must gently separate them into singles or small groups at planting time.

For me, I just sow four or five seeds in each cell and then remove the weakest one or two at planting time, if necessary, so that I get my group of three.

One reason I like this grouping arrangment is that it works well with drip irrigation. You can just plant each group near a drip emitter.

I stop watering my onions a few weeks before I harvest them. Usually this means cutting off the water in mid or late April (later for some varieties though). There is still enough residual moisture in the soil for the plants to finish their growth, and allowing the surface of the soil to dry out makes it less likely to get any rot starting near the base of the bulbs.

It is often recommended to leave the harvested onions on the ground to dry for a few days, but I no longer do this. It takes up garden space, and it sometimes ends up in sunscalded bulbs. I get better results from laying the bulbs out in the shade elsewhere, like on the back porch or in the garage.

Just don’t stack them on top of each other for long or else they won’t dry properly and they’ll get rotten spots. Laying them out in a single layer is best.

The goal is to let the tops totally dry, the roots totally dry, and the outer layers of skin over the bulb totally dry. This way you’ll have a seal around your healthy onion bulb, and it will store for as long as possible.

If you’ve grown just a handful of onions, then you should start eating them as soon as you harvest them. If you’ve grown dozens of bulbs, however, you’ll want to grade them. The lowest grade is given to plants that have made flowers.

Onion plants that flower will have a bulb with a hollow core. The bulbs are still perfectly edible, but they won’t store well so you should eat those bulbs first.

Why do some onion plants make a flower stalk? I don’t know. I’ve yet to encounter a satisfactory explanation or method of prevention. Some plantings just flower more, such as this one of mine last year:

Bulbs that feel solid on all sides will store the longest. How to store them?

It depends on your space constraints. If you have room in a refrigerator, then that is the best vessel for storing onions. As I write this here in late October, we are almost finished eating our onions that were harvested in May and June and were stored in the fridge. They kept perfectly in the fridge for over four months.

Without space in the fridge, find another spot that is nearest in environment to a fridge: shaded and cool (though not below 32 degrees). For me, this means hanging in the garage:

Oh yeah, what about pests and diseases? Haven’t seen them on onions, personally, which is way I say that growing onions in Southern California is mostly about timing.