Avocado leaves turning brown? Here’s why and what to do 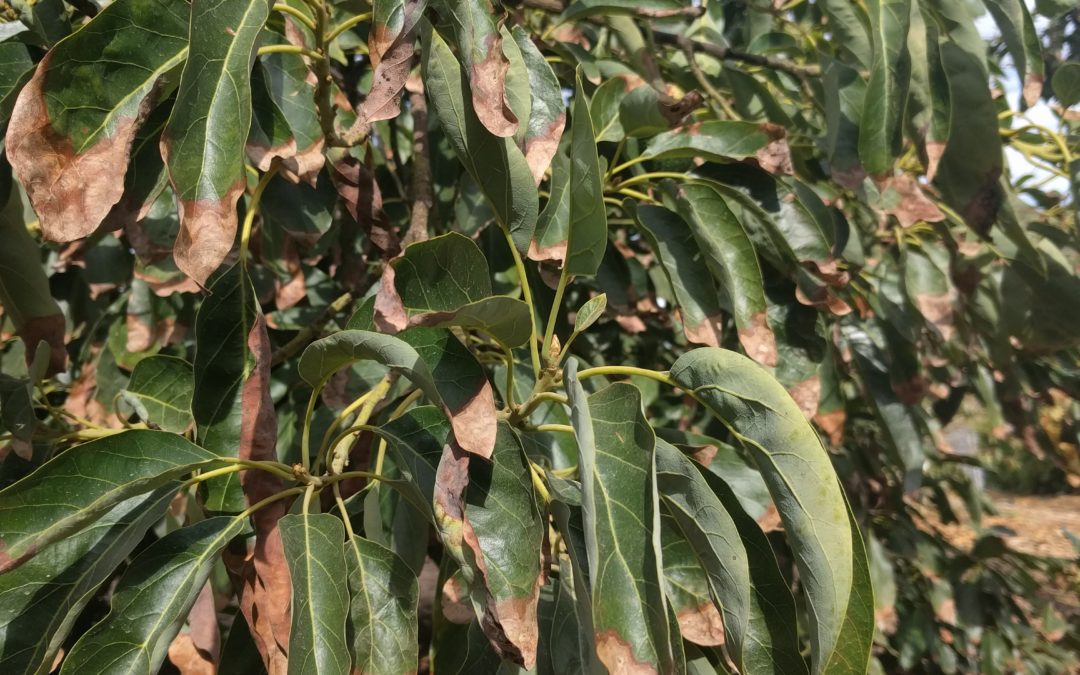 One of the many signs of the fall season in Southern California is the browning of avocado leaves that is also called “tip burn” because the browning starts at the leaf tips. The photo above shows leaves on one of my Hass avocado trees in late fall. Why do they look like this? And what can be done about it?

(Note: This post is mostly about avocado leaves that have browned due to water-related issues, but there are many other reasons that avocado leaves discolor.  Please see my post “Reading avocado leaves” for some of these other issues.)

Why do avocado leaves turn brown?

There is one primary culprit of the typical leaf burn that develops in the fall, and that’s chloride in our irrigation water. In Southern California, much of our water is imported from the Colorado River, a source which is salty. (What is a salt in this context? See Wikipedia’s salt page.) One of the salts that the Colorado River contains in unfortunately high proportions is chloride.

How high is the chloride level? Usually from 80 to 100 parts per million. You can look at your particular water district’s annual quality report for more precise numbers, but most of Southern California is similar because we import from mostly the same sources. According to researchers at the University of California, in a study titled “Adoption of Water-Related Technology and Management Practices by the California Avocado Industry”, avocados suffer if the chloride level is over 75 parts per million.

What happens is that all spring and summer we water our yards with this high-chloride water and most of our plants don’t show much dislike, but avocados are especially sensitive to it. Avocado roots take up the high-chloride water and move it up their tree’s trunk, out the branches, and into the leaves. Leaves breathe out this water, but while the water evaporates off the leaf surface, the chloride remains within. It’s like when you take a swim in the ocean and the sun dries the water off your skin but leaves a crust of salt.

Over the irrigation season, the chloride level builds up in the avocado leaf until it reaches a toxic level and the leaf tissue begins dying, starting at the tip. That’s the brown: chloride-induced death.

The phenomenon of chloride leaf burn has been understood by avocado farmers for a long time, at least 75 years. (Here’s an article from 1951 titled “Leaf Burn of Avocado”.)

What can we do about it?

Let me first note that minor tip burn on avocados is no big deal. More specifically, if less than about ten percent of a tree’s canopy is brown (dead), there should be no reduction in fruit yield. In other words, if a tree has only a little tip burn, it will still produce as much fruit as if it had perfect foliage. I’ve seen this play out over and over on my trees.

Why does more than about ten percent leaf burn cause a reduction in yield? It’s because when the season for flowering begins (usually in late winter), the tree will drop those damaged leaves and grow new ones rather than do much flowering. Few flowers equals few fruit.

The question then is how to keep the fall tip burn to a minimum. The answer: water enough.

The one good thing about chloride is that it moves with water. Because of this, commercial farmers primarily manage it through leaching, as can we home gardeners. By leaching, I mean that they overwater on purpose so that the extra water will carry some of the chloride that has built up in the soil down deeper into the soil, so deep that it is below the reach of the tree’s roots — and therefore no longer able to affect the tree.

There are two main ways to leach. You can water a lot at one particular time. For example, farmers who use micro-sprinklers will run the sprinklers for up to 24 hours straight, and they’ll do this once a month in July, August, and September. Alternatively, you can water a little extra every time you irrigate. This is called adding a “leaching fraction”, and the fraction is usually 10 to 20 percent on top of what the tree needs to grow well otherwise.

For myself, I’ve done it both ways and seen slightly better results with a leaching fraction as opposed to monthly leachings. So, these days, I deal with chloride by watering a little extra every time I water.

It has also been my experience that avocado trees do better as they get older if watered by sprinklers rather than drip irrigation. (Young avocado trees do fine on drippers.) This doesn’t seem to be the case with trees I’ve seen close to the beach which never experience intense heat and low humidity, but inland it seems to make a difference. (See page 20 of this slide presentation by David Crowley of UC RIverside for an illustration of how sprinklers and drippers leave salt in the soil differently.)

It’s important to note that an underwatered avocado tree can end up with brown-tipped leaves in the fall even if the water it has been given has not been high in chloride. I have seen many avocado trees in abandoned yards or groves that now survive on rainfall alone and end the growing season with brown-tipped leaves, yet rainfall has almost no chloride. The problem is that in Southern California we don’t usually get enough rainfall to satisfy the needs of these avocado trees. So in your yard, even if you are watering with high quality water (stored rainwater, for example), you still must give an avocado tree enough of it or the leaf tips and margins will brown.

South side versus north side

Look at the south side of your avocado tree. Notice the amount of leaf burn.

Now compare it to the north side.

Always, the leaves on the north side are a deeper green and have less browning. And this is related to the fact that the sun shines on the south side more intensely, extracting more water from those leaves every single day of the year, which means more chloride is collecting in those leaves compared to the north side. (This is for the Northern Hemisphere.)

It’s also possible for avocado trees to have their leaves burned by intense sun, and that will cause them to brown in a different fashion compared to the chloride issue. (For more on this, see my post, “Avocado trees get sunburned — What to do?”)

Also note that an avocado leaf that dies a natural death — a healthy death, you could say — a death from old age (called senescence by botanists), does not die starting at the tip nor does it turn brown before it falls. It turns uniformly yellow.

Avocado leaves damaged by cold turn brown, but in a different pattern than tip burn caused by chloride. Cold temperatures can make young leaves curl up and brown while older leaves take on a mottled browning. If the air gets extremely cold, say low 20s, then avocado leaves completely brown and dry up within days and they don’t even drop from the tree.

Here’s a video where I show the difference between browning on avocado leaves caused by cold versus chloride:

As I mentioned earlier, avocado varieties differ in their tolerance to chloride, and therefore get more or less tip burn even if given the same amount of irrigation water. Hass is particularly sensitive to chloride. Reed and Fuerte, on the other hand, are two varieties which show more tolerance. I’ve observed this in my own Reed and Fuerte trees as well as those of others.

Avocado rootstocks also differ in their tolerance to chloride and other salts. The most common rootstock used for avocado trees sold in retail nurseries in Southern California is Zutano seedling, and such a rootstock is less tolerant of chloride than many other rootstocks. (For more on this, see my post, “Avocado rootstocks: What do they matter?”)

Lastly, brown leaves on a young tree that has been in the ground for less than a year is most likely due to watering too infrequently rather than chloride build-up. Newly planted trees are different: they need a little water often. The intervals then spread out as the tree ages. (See my post, “How to water a newly planted avocado tree,” which contains a reference chart of watering frequencies.)

Just to show the yearly process with avocado trees and their response to chloride-damaged leaves, I’ve taken a couple photos of the same Hass tree as above, now in spring. These photos are also of the same branches on the north and south sides of the tree.

Now the north side:

Some new leaves, but still many old leaves hanging on. This is because they weren’t as damaged as the ones on the south side, and so the tree still finds them productive. Therefore, the tree doesn’t feel the need to put its energy into shedding them and growing new leaves to replace them — and is able to allocate more energy into flowering and fruiting.

May your avocado leaves be mostly green this fall, and may they be flowery and fruitful come spring. If not, more water ought to solve your lot.

This website has no ads because of the wonderful, direct support from gardeners like you. Learn more about supporting The Yard Posts HERE