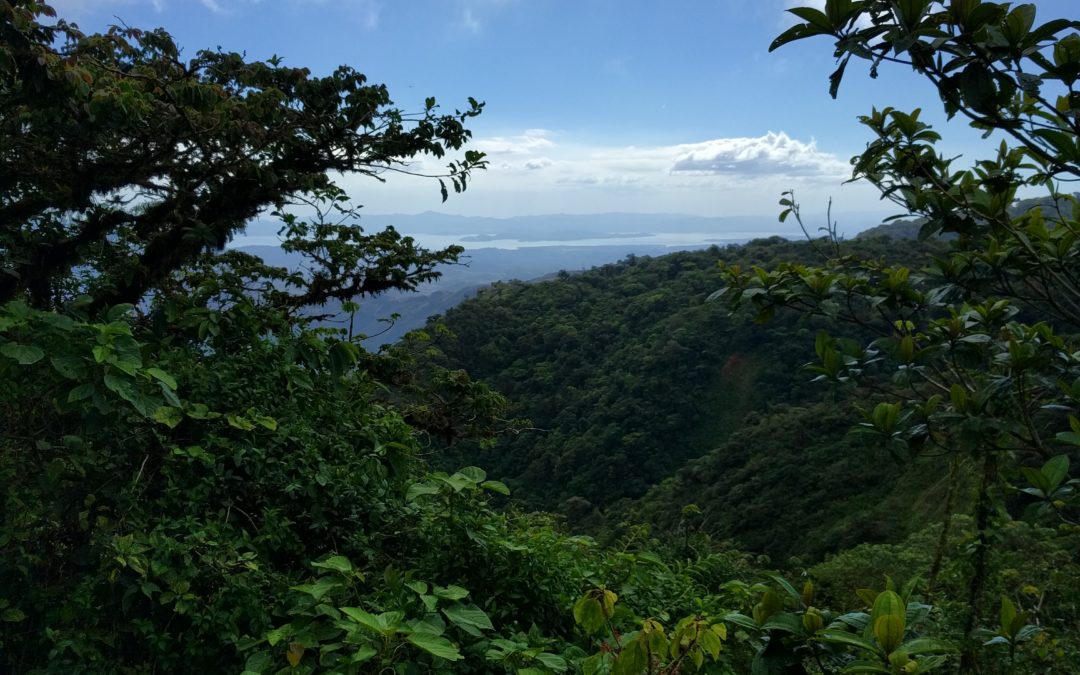 Our guide through the Monteverde Cloud Forest Biological Reserve in the highlands of Costa Rica had just picked up a fallen orchid to show us when we heard a whistle. He put the orchid down and started walking briskly toward the whistle. We followed. He turned back to whisper, “They have found the Resplendent Quetzal.”

Soon we found other guides and other hikers choking the path and staring up into the canopy. Everyone talked with excitement. Seeing this bird is almost everyone’s grand goal in visiting the cloud forest.

The Quetzal (pronounced “ketsal”) is special in many ways to many people. It is half of the Aztec god Quetzalcoatl, a bird-serpent. It is the national bird of the country Guatemala. Because it quickly dies if held in captivity, it represents freedom for some. But plainly to anyone on the planet, including me, it is beautiful, it is resplendent indeed. 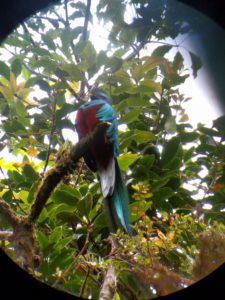 This is the bird we saw, as we saw it, perched majestically about forty feet off the forest floor. I was surprised to feel so impressed by it. Bigger than I expected, its colors were also brighter. The iridescence of its crown and the length of its tail feathers you can’t see in this photo, but they captivated me. 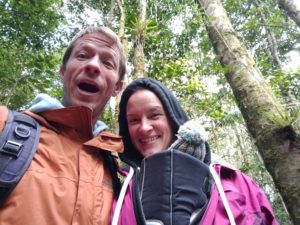 We just saw the Resplendent Quetzal! Well, except for our sleeping baby daughter.

And yet, before seeing the bird all I’d been interested in was what the Quetzal ate.

“Sometimes, particularly in the highlands of Guatemala, native guides will inform you that only where the Quetzal bird is found there you may find wild avocados, as this rare bird eats the fruit of some Perseas. Therefore we must explore the Quetzal country.” So wrote Eugenio Schieber and George Zentmyer in the 1972-73 Yearbook of the California Avocado Society. (Read their article, “Collecting Perseas in Central America and Mexico.”)

Schieber and Zentmyer were on a quest to find wild avocados in order to collect their seeds and use them as rootstock back in California. The hope was that these primitive avocados might be resistant to the fungus Phytophthora cinnamomi, which causes the disease called root rot. At the time, California avocado orchards were being thoroughly damaged by root rot.

As for me, I just wanted to see a wild avocado tree with my own two eyes, at all, for the first time. I love everything avocado — eating them, growing them, reading about them. Only I’d never seen them in their native habitat, which most botanists agree ranges from southern Mexico down through Costa Rica and possibly as far south as Peru.

Yet, a mere twenty steps into our hike that day I had spotted leaves that shouted avocado to me. I asked Kenneth — who was a local guide, having grown up in northern Costa Rica, despite the familiar name — if it was by chance an avocado. “Yes, it is. Avocados are one of the most common trees here.” 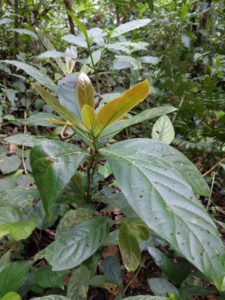 Then he pointed out a mature wild avocado tree. I couldn’t have wrapped my arms around the trunk, which shot vertically with no thick side branches for at least forty feet, at which point it started to spread and have foliage. 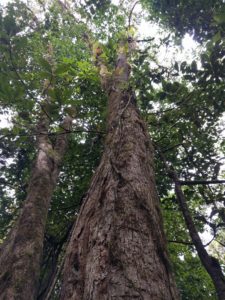 This was similar to almost all of the wild avocado trees I saw that day. This was the cloud forest, where clouds are ever present and there is over 100 inches of rain in a year, where trees reach — stretch! — for the top of the forest canopy in order to gather sunlight. Below them are flowering shrubs and vines. Attached to the trees, avocado and other, are epiphytes galore.

Epiphytes grow on the trunks and branches of the trees but do not use the trees for anything except structural support. They get all of their water and nutrients from the air and rain. Epiphytes I noticed on the wild avocado trees included orchids and bromeliads. 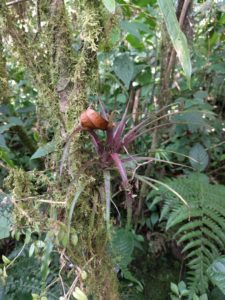 It was only a few more minutes into our hike when Kenneth spotted a wild avocado fruit on the ground and handed it to me. 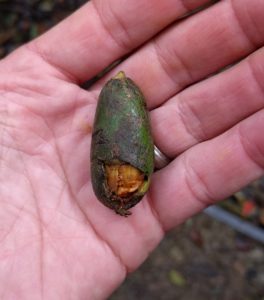 It was recognizable as a kind of avocado, and yet it was extremely different from the cultivated varieties that we grow in our yards. The flesh was not much thicker than the skin, and the seed was proportionately huge. The entire fruit was only a little bigger than an acorn. Now I understood how the Quetzal could eat it whole.

As Kenneth explained, a Quetzal eats a couple of wild avocados whole and then perches on a branch for about 25 minutes, not moving, just digesting. The acids in its stomach remove the skin and flesh from the seed, and then the bird regurgitates the seed. Sometimes you’ll hear an avocado seed hit the ground as you’re walking through the forest, he said, and that’s how you can find the Resplendent Quetzal. Maybe that’s how someone first spotted this one.

I was watching the bird through Kenneth’s telescope when a seed popped out of its beak. But the Quetzal didn’t drop it. The bird rotated it 180 degrees and swallowed it again. “Kenneth! I just saw . . . !”

He said the bird does this to get more flesh off the seed. A minute later, I heard a nearby thud. “That was the seed,” he said.

If someone comes to Monteverde hoping to see the Resplendent Quetzal, they can’t find one, Kenneth told us. But if someone doesn’t care to see a Quetzal, they inevitably see three. Later that day, while hiking without Kenneth, we saw our second Quetzal perched over a suspension bridge. The next day, we saw our third.

Each Quetzal was gorgeous, but still my eyes during our hikes were searching for the wild avocado fruit they ate and the unimaginably large trees that bore them. Wild avocado trees were everywhere, Kenneth was right. The fruit, however, was nowhere. I never saw another one. That’s OK — they are for the Quetzals anyway, right? We have big fleshy ones at home for ourselves.

(Kenneth took this video of the Quetzal with my camera using his telescope.)

Among some of the oldest avocado trees in California, at The Huntington

How the Fuerte avocado really got its name

My goal is to help others grow some food at home, with a focus on vegetables and fruits — especially avocados — in Southern California. I write a new “Yard Post” every Friday.