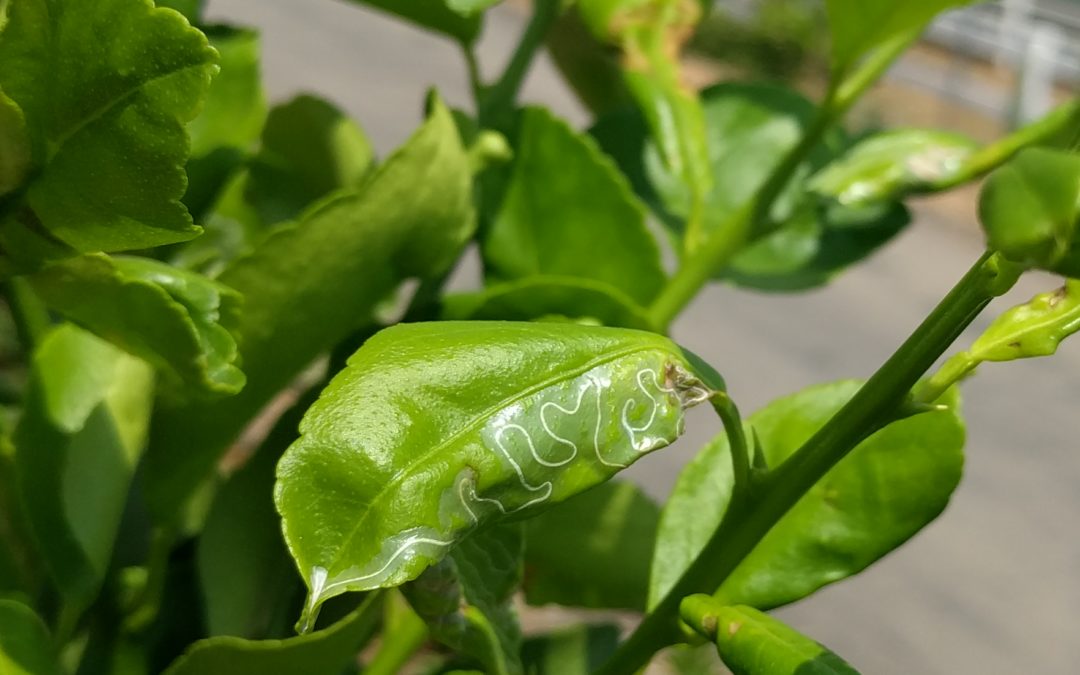 Back in the winter of 2015, a neighbor noted how poor my lime tree looked. She said her lemon tree didn’t have those “curly leaves” because she sprays it. A couple days later she brought over a blue bottle of the stuff she uses: Bayer Advanced — Fruit, Citrus and Vegetable Insect Control.

She was right. My lime tree did look ragged, its foliage sparse and damaged from having leafminers the first two years of its life. Citrus leafminers are the insects whose larvae eat zig-zag tracks, or mines, in leaves. The leaves become curled and unsightly after the leafminers exit and turn into tiny moths. The moths then lay eggs which hatch and eat mines through leaves again, and so on.

I’m leery of spraying though. I tried it once. More than a decade ago, I sprayed neem oil on a lemon tree because it was infested with aphids. The tree remained infested with aphids — until I took other measures to control the ants which were protecting the aphids from predators.

I’m not convinced of the effectiveness of many sprays, and although other sprays clearly kill target pests, there can be broad, long-term harm that outweighs short-term benefits.

But my lime tree looked so bad. It had yet to produce a single piece of fruit, and I began to think that spraying might be the only way to control these leafminers and keep the tree alive.

What’s in this blue bottle? Immediately, the active ingredient jumped out at me: imidacloprid. This chemical is the most widely used insecticide in the world. It has also had its use severely restricted by the European Commission starting in December 2013 due to its effect on honey bees.

Bayer CropScience, the developer and primary manufacturer of imidacloprid, both fought this decision by the European Commission and acknowledged the toxicity of the chemical to honey bees on the blue bottle I held in my hands. From the label: “This product is highly toxic to bees . . .” To reduce the risk of harm to bees, the label therefore recommends to “not apply until after trees have flowered or when bees are actively foraging.”

What happens is imidacloprid is taken into a tree’s system so that when a leafminer larva eats into a leaf it consumes some of the chemical and dies. But flowers are also part of the tree’s system, and when bees drink nectar from the tree’s flowers they also consume imidacloprid. They may not die, but there is sub-lethal harm all the same.

My lime tree wasn’t blooming at the time — this was February — but I knew that it was about to have its first bloom of the year. Then I read on the University of California’s Integrated Pest Management webpage for imidacloprid that the insecticide “can move into nectar, so don’t apply prior to bloom.” That was specifically referring to applying an imidacloprid product on the soil, however, not on the leaves. So I’m OK to spray now?

The UC IPM page continued, “Foliar application is not recommended because of negative impacts on natural enemies and bees.”

I was scared. It seemed that if I used imidacloprid, I would be harming both leafminers as well as leafminer enemies and bees.

I gave the blue bottle back to my neighbor.

More important than the health of my single lime tree was the health of the bees in my yard generally. My avocado trees and apricot and peach and orange trees were all about to start blooming too, not to mention all of my vegetables, and I needed these bees to help pollinate the whole yard.

In late February, the lime bloomed and it flushed new growth and it dropped many of its old and leafminer-damaged leaves, and here’s how its foliage looked in April of 2015:

To my surprise and delight, the foliage was as uniform and vibrant green as I could color with crayons.

There are no leafminers apparent anywhere. How could they have been so populous and damaging last year and now non-existent? And how could this have happened without my help?

One thing I’ve noticed over the years is that leafminer damage varies from season to season. When a citrus tree grows new leaves in the late winter and early spring, those leaves usually have little to no leafminer damage. Flushes of new growth in the summer tend to have the most leafminer damage.

This is how it occurs on my citrus trees in my yard, located twenty miles from the ocean in San Diego County. The pattern in your yard is probably similar. I’ve heard reports from others throughout Southern California whose patterns are similar.

So the fact that I didn’t have leafminers on my lime tree in the early spring of 2015 did not mean that leafminers were extinct in my yard. They have climatic preferences, just like we do.

Sure enough, leafminers would appear again from time to time on that lime tree. Some years were worse than others, but the tree is a healthy and powerful producer of limes today. Here is how the tree looks here in August 2021:

Leafminers also damage some of my other citrus trees — although not equally. They seem to have varietal preferences. For example, here is my Valencia orange, on which I’ve only ever found a single leaf with a leafminer in it (I have no explanation for this):

Why haven’t leafminers increased their population and caused even more damage to the leaves of my citrus? I have a good amount of food for them, with nine citrus trees.

The UC IPM webpage about citrus leafminers says, “the best course of action is to leave it alone and let the natural enemies of the citrus leafminer feed on and parasitize the larvae in the mines, rather than trying to control this pest with insecticides.”

UC IPM: “In other areas of the world where the citrus leafminer invasion is long established, the experience has been similar: a high level of damage to citrus in the first year or two is followed by decreasing severity due to natural enemies parasitizing or consuming leafminers. These natural enemies, which are already present in the environment, survive by seeking out mining insects in which to lay their eggs. Eventually, the leafminer populations decline as the population of natural enemies increases.”

Therefore, my conclusion: Don’t spray and the bees won’t be harmed and the natural enemies of the leafminer won’t be harmed and will be able to do their work. Their work, however, is not to exterminate their food source (leafminers). So we will have to tolerate some zig-zag tracks and curled leaves.