Avocado fruit drop: Why? When? How many? 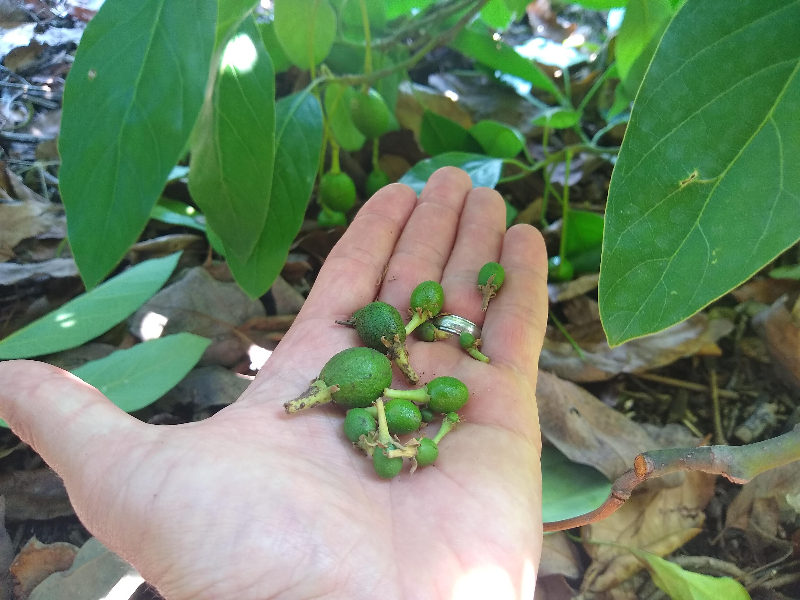 In the spring you see flowers on your avocado tree that soon become green fruitlets. Wonderful! Your tree is making avocados! Then they start dropping.

What did you do wrong? Why is this happening? When will it end? How many are going to fall?

Most often, young avocados are shed by a tree because the tree has set more fruit than it can handle. It is self regulating; it is self thinning its crop load. There is nothing you can do to stop it, and you wouldn’t even want to try.

I tagged a branch on my Lamb avocado tree on June 13 and counted the avocados set on that one small branch: 43.

There is no way that a branch that is only as thick as my finger can carry 43 mature avocados. So the tree got rid of most of those tiny fruitlets until it had only seven left when I checked it on July 2.

Another reason that avocado trees drop some of their fruit is that the fruit hadn’t been properly pollinated or fertilized. Sometimes you can see this when you cut into a dropped avocado and find that it has a dark-colored, aborted seed inside. (Not to say that all avocados without healthy seeds inside are abcised though.)

On my Pinkerton avocado tree this year I have gotten both more fruitset and less fruit drop than in years past. I can’t say for sure what this is due to, but the only variable that has changed around the tree is that this is the first year that it has had significant cross-pollination opportunities.

Last year I planted an Ettinger avocado tree next to the Pinkerton. This spring, both bloomed and I watched bees cross between the trees throughout the day, every day.

Again, I don’t know that this has anything to do with cross-pollination, but I suspect it.

Young avocados are far more likely to be dropped from a tree that is stressed compared to older, bigger avocados. For example, in early July of 2018 we had a blazing heat wave in Southern California. My yard reached over 115 degrees. I had hundreds of avocados on my trees that had just started growing. My trees shed most of those small avocados over the next few weeks due to the heat stress. However, none of the mature fruit dropped. Not a single mature avocado dropped from any of my trees.

We must be very attentive to watering (and possibly using other heat mitigation techniques) through any heat waves during the late spring or early summer when our avocados are young and small in order to prevent or at least minimize drop.

But after July, most avocado varieties stop dropping fruit — as long as they’re not severely stressed from heat or lack of water. For Hass in particular, you might see a few avocados still dropping in early August, but by mid August for sure you should no longer see fruit drop in numbers.

Some late-blooming varieties continue to drop fruit a little later, as can be expected. I’ve always continued to have some drop on Lamb and Reed through August. I’ll even get a few fruit dropping in early September. By mid-September, fruit drop should cease on these varieties.

So in general, you can count your predicted harvest for the following year in the late summer, around August or September.

(One side note to this is the fruit drop that occurs in the second spring on some avocado varieties with summer harvest seasons. Varieties such as Reed, Lamb, and Holiday often start to drop a few fruit in the second spring when they’re almost mature. I don’t know what causes this or how to prevent it. Luckily, the fruit is usually bland but still edible — so not a total loss to a backyard grower.)

How many avocados drop

I’m aware of no simple answer as to what proportion of tiny fruit set in the spring will drop before the August/September cessation. I’ve seen trees drop almost none and others drop hundreds, all in my own yard and given the same care.

Others have observed the same. For instance, in one study of Hass trees growing in Irvine, California it was noted that in 1995 only 12 percent of fruit that set remained on the trees whereas in the following year 64 percent remained.

Moreover, I’ve seen different branches on the same tree drop very different percentages. Remember my Pinkerton tree whose tagged branch held four avocados from June 13 until today? Well, another branch on that same tree had five avocados on June 13 but only one today:

(I still suspect the tree’s fruitset and retention has been helped by cross-pollination from the Ettinger because of the amount of fruit remaining on the tree overall.)

What can we do to keep as much fruit on our avocado trees as they can manage? What surely helps is to never allow a tree to stress from heat or lack of water. Anything else?

— And they have looked into the influence of fertilizer applications but haven’t found clear results that I’m aware of there either (see here, for example).

— Finally, if you’re experiencing a lot of fruit drop on a healthy, unstressed tree, you might consider providing for cross-pollination in the future. There are various ways to do this, including planting an adjacent tree of the opposite flower type, using a potted pollenizer tree, and grafting in a pollenizer branch.

It’s late July . . . how many avocados will our trees still hold in August and September — and therefore probably all the way until eating time? Let’s keep them hanging!

Walk through my yard with me in a video version of this post: