Cross pollination of avocados, or Why I planted a Hass next to a Fuerte

You don’t need more than one avocado tree to get fruit production, as I wrote about here, but having two trees and allowing for cross pollination can never hurt. And there are some studies showing increased yield when two different avocado varieties are growing in proximity, which is why I planted a Hass next to a Fuerte.

The reality outside is not that cut and dried, however. Sometimes a single tree will have both male and female flowers at the same time, and sometimes two different A types will have slightly different flowering schedules such that for an hour or so one day each tree will have many opposite-sex flowers, as I observed with my Reed and Lamb trees last year.

Nevertheless, having two trees of different types allows for the most cross-pollination opportunities. And this probably explains the studies that show increased fruit yield when different types are growing next to each other. Here is a study by Bob Bergh and Don Gustafson from 1958 which focuses on the Fuerte variety, a “notoriously erratic bearer,” interplanted with Hass and Topa Topa. Bergh and Gustafson report, “Fuerte trees which adjoin Topas set about two-and-one-half times as many fruits as Fuerte trees one row or more removed from Topa interplants.” And then, the Fuerte trees that were isolated “had set an average of 99.3 fruits per tree, while four rows of Fuerte trees which have Hass interplants had set 157.6 fruits on the average.” Conclusion: Fuertes average more fruit production when interplanted with complementary varieties, at least in this particular grove in San Diego County. 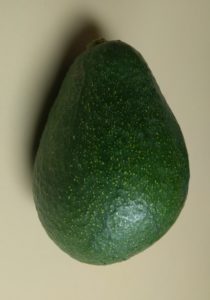 Another study, this one focusing on Hass instead of Fuerte, was done by University of California researchers in 2002 to 2005. Part of the summary reads: ” . . . the presence of pollinizer varieties in close proximity enhance the total number of fruit harvested from ‘Hass’. The influence of pollinizers on yield diminishes as the distance from the pollinizer variety increases.”

All of the studies report this last finding — that the benefits of cross pollination are at their highest when the two varieties have branches that are very close, so close that they touch. They suggest a few different ways of achieving this: grafting two varieties on one trunk; planting two trees only a couple feet apart and growing them up like a multi-trunked, single-unit tree; or planting two trees close enough so that their canopies will touch or nearly touch when they reach their mature sizes.

Commercial growers only use this last option. Many decades ago, they found multi-graft trees too difficult to maintain; one of the varieties always ended up overtaking and shading out its partner. They seem to have settled on mere interplanting because it doesn’t require skilled labor to maintain nor to harvest.

I’ve decided on a method most like the second one, that is, I’ve planted most of my trees in pairs that I’ll grow like multi-trunked, single-unit trees, except that I haven’t planted them only a couple feet apart. I’ve planted them 7.5 feet apart. I did this to allow for the survival of the less vigorous tree in the pair.

For example, I planted a SirPrize (B type) 7.5 feet from a Hass (A type). The Hass has outgrown the SirPrize by leaps and bounds, yet the Hass hasn’t started significantly shading the SirPrize because of the space between them. After four years in the ground beside each other their canopies are intermingling and I’ve started to prune them into a single fat pyramid shape that is about 15 feet tall and a little wider.

And I have a Fuerte avocado tree that I’ve provided with a Hass companion. I chose Hass as the A-type companion for my B-type Fuerte mostly because of the aforementioned study by Bergh and Gustafson in 1958 showing increased fruit set by Fuerte trees that had Hass growing beside them. Here’s another photo of my two trees that will someday be growing branches into each other and enhancing each other’s fruit set. 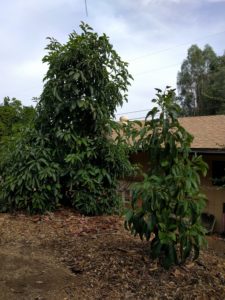 Fuerte on the left, young Hass on the right.

Just to continue the stories of these two trees, the Fuerte remains but the Hass was killed by a gopher. Instead of replanting a Hass, I’ve decided to provide for cross-pollination for the Fuerte by grafting in branches of a few other trees, including Hass.

I discuss the Pinkerton branches that I grafted into this Fuerte tree in my post, “Grafting a pollenizer branch into your fruit tree.”

And here is a video showing the fruitset results on the Pinkerton grafts after one year of growth: