The Fuerte avocado tree: a profile 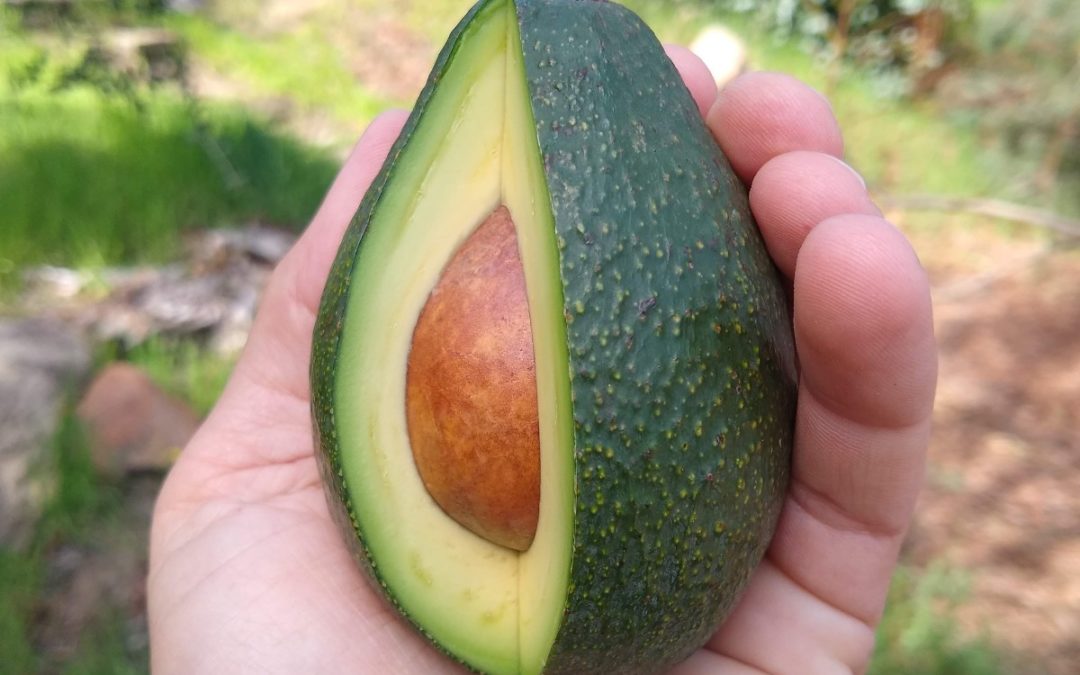 I was speaking with an avocado farmer from South Africa, and he asked me about my favorite avocados to eat. That’s hard to answer, I started. But I told him that recently I’d had some Kahalu’u and Jan Boyce avocados that were very good. I turned it back to him, “What’s your favorite?”

And truthfully, even as I keep tasting new varieties of avocados that are interesting and delicious, the fruit from that tree that Carl Schmidt found in Atlixco, Mexico way back in 1911 remains my favorite too.

I’ll get to the growth habits and fruit production quirks of the Fuerte tree, and I’ll explore a bit about how the Fuerte came from Atlixco to Altadena to the world, so that you can decide if it is a good variety to plant in your yard. But first, let me please attempt to describe what I find wonderful about the fruit.

For an avocado, Fuerte is medium sized, averaging a little bigger than Hass fruit. The skin is green, only lightly bumpy with yellow dots, and it remains green even when it’s ripe. If the fruit has been mishandled, then black spots appear on the skin as it ripens (they are not hidden as they are with the black skin of Hass).

The shape is similar to a pear, but Fuerte avocados always have this unique slant to their bottom ends. I’ve always found this notable and it helps me to spot a Fuerte among a mix of avocado varieties.

Inside, the seed is pointy and a bit bigger than a typical Hass seed.

The adjective “nutty” is often used to describe the flavor of various avocados, but I think that it is most accurate for Fuerte. Is it hazelnut that the taste reminds me of? I can’t figure it out. But no other avocado has as distinctly a nutty flavor to me as Fuerte.

Fuerte’s texture is finer than Gwen, but not as smooth as Reed. It has the right amount of substance, especially when cut open at the right time. You don’t want to let a Fuerte get soft-ripe; they are best when firm-ripe.

I used to think that I was alone in still finding the Fuerte a notch tastier compared to all of the other excellent avocados available in the year 2020. Yet I continue to meet people like Jan, the farmer from South Africa, who have eaten many kinds of avocados and also still find the taste of Fuerte unsurpassed. Writes Gary Bender in Avocado Production in California, “The Fuerte is still thought by many in the avocado industry to be the best tasting.”

What’s the catch, then? Why can’t we find Fuerte avocados in the grocery store? Why doesn’t everyone have a Fuerte avocado tree growing in their yard?

My own Fuerte avocado tree illustrates the reason Fuerte avocados are rarely sold in grocery stores anymore, and why most Fuerte trees in backyards are not recently planted but rather leftovers from a past era.

My Fuerte is six years old, as is my older son. I planted it when he was born. Yet it still hasn’t given us much fruit. I’ve got other avocado trees in my yard that were planted at around the same time that have already provided us hundreds of avocados.

Is my Fuerte uniquely unproductive? No. “Individual [Fuerte] trees in a grove may produce good crops while many may produce little or nothing,” wrote Frank Koch in his 1983 publication, Avocado Grower’s Handbook. He adds, “It has been said that 80% of our Fuerte fruit comes from 20% of the trees.” And he concludes, “So when drone [Fuerte] trees are identified they should be grafted over.”

One of the first ideas for dealing with “drone” Fuertes was to graft them over using scion wood from the Fuerte trees that fruited well. It became accepted that over the years various strains of Fuerte had developed, and it was beneficial to make new trees from strains proven to produce. Here is an ad in the 1952 California Avocado Society Yearbook from a nursery marketing trees of specific Fuerte strains:

However, I’ve been collecting scion wood from good-producing Fuerte trees around Southern California for some years now and grafting them onto various trees in my own yard and elsewhere with mixed results thus far. I suppose I shouldn’t be surprised. This approach was tried a long time ago here in California without much success.

Apparently, Fuerte has a penchant for mutating, or sporting, on branches or even individual buds. And it’s hard or even impossible to identify the mutations. (See comments from Bob Bergh about this here.)

Another idea for why certain Fuerte trees produce well whereas others don’t relates to rootstocks. Maybe Fuerte trees bear better on certain rootstocks, and mine is not on the right one. They also found some success with this approach in Israel. Yet again, when tried in California it didn’t achieve consistent results.

Bear with me. I’m taking some time to explore the mysteries of the Fuerte’s erratic and unpredictable fruiting because it is a characteristic unique to Fuerte, and because you might also be dealing with a Fuerte tree in your yard that is unsatisfactory in how many avocados it gives you.

A final key factor that has been explored in the bearing of Fuerte trees relates to temperatures during flowering. It has been found that the fruit production of Fuerte trees is highly correlated with warm temperatures during bloom. More specifically, researchers observed that daily highs should be above about 70 and nightly lows should be above about 50 for good fruitset on Fuerte. And if the average is even higher, closer to 65, the better.

In 1934, some researchers purposely propagated some Fuerte trees with scion wood from low producing mother trees that were growing in a cool, foggy coastal location and planted the new trees in a warmer inland location . . . and the trees bore well! (See “Suggestive Evidence of the Existence of Strains in the Fuerte Avocado Variety.”)

Such findings have long caused the California Avocado Society to recommend that Fuerte be planted only away from the immediate coast, but not too far inland where nights are cold.

Where is my Fuerte tree? I’m twenty miles inland, but at an elevation of 1,400 feet in the foothills where nights are relatively cold, plus I planted my Fuerte immediately uphill of my garage where the cold air that slides down the hill each night gets stopped and pools. Not smart.

Last spring, I observed that my Fuerte rarely opened flowers in their female phase, which is the main problematic result of cool temperatures. Without female flowers there can be no pollination.

Fuerte is the original avocado. Before Hass took over, Fuerte was the most widely planted variety.

It so happens that the town where I grew up has some of the oldest living Fuerte trees because it is not far from Altadena, where the first Fuertes were propagated back in 1911.

Fred Popenoe owned West India Gardens nursery in Altadena, and he hired Carl Schmidt to search for good avocados in Mexico. Schmidt took branches from the trees with the best fruit and shipped them up to California.

There in Altadena, all of Schmidt’s shipments were used to make grafted trees (clones), and Popenoe observed that the tree that Schmidt had labelled Number 15 grew exceptionally fast so he nicknamed it “Fuerte,” meaning strong in Spanish.

(There is an alternative story about how Fuerte got its name that is often repeated but which I believe is inaccurate. See my post about this: “How the Fuerte avocado really got its name.”)

(The tree that Schmidt had labelled Number 13 was later named Puebla. See my video profile of the Puebla avocado here.)

A man named J.T. Whedon of Yorba Linda was the first to plant a number of Fuerte avocado trees, purchased from Popenoe. After five years of growth, Whedon commented, “Of the twenty-one varieties planted in 1914, the Fuerte is the only one proving entirely satisfactory.”

When houses began to replace some of the early Fuerte groves in Southern California, not all trees were removed. Sometimes schools and housing developments left old avocado trees here and there. Here is one such old Fuerte in a friend’s backyard in my hometown.

Some Fuerte trees have a very long flowering season. Most avocado varieties do most of their flowering in March, April, and May. But I have seen Fuerte trees begin to bloom as early as October. Here is a Fuerte tree in San Clemente with flowers on October 3, 2019:

And here is a Fuerte tree in Poway approaching full bloom on January 18, 2020:

Yet, Fuerte trees will often still be blooming as late as June. All this adds up to a potentially long harvest season, both on individual trees as well as from Fuerte trees in Southern California as a whole.

Early set fruit might taste good starting in November. I think of Thanksgiving as the day to start testing avocados from Fuerte trees. And even in June there can be Fuertes that still taste good. But the heart of the normal Fuerte harvest season is approximately January into April for most of Southern California.

Is Fuerte a good avocado tree for your yard?

Despite the fact that Fuerte isn’t the most reliably productive avocado variety — which is one of the main reasons that Hass replaced it on commercial farms — it can still be worth planting in a backyard. One reason is that the fruit is so good to eat. Another is that it is a B-type avocado, which means that if you already have an A type (such as Hass), the Fuerte will likely improve the fruitfulness of that tree.

I grafted a couple of branches of an A-type variety called Pinkerton into my Fuerte, and the first time those little Pinkerton branches flowered they set more fruit than they could hold. That is the power of Fuerte pollen.

In addition, Fuerte is an attractive tree for an avocado. Its leaves are deep green and they get less leaf burn in the fall and winter compared to some other varieties. I also find the red flecks on the new shoots of a Fuerte tree to be attractive.

Fuerte is also slightly tougher than some varieties during winter cold snaps. Just a few weeks ago, my yard dropped to 25 degrees one night and my Fuerte came through in better shape than my Hass, Reed, Lamb, and some others.

If you only have a small space in your yard for an avocado tree, you might be better off with a naturally slower-growing variety, say Lamb or GEM — although it is possible to keep a Fuerte down to size with consistent pruning.

But maybe you have yard space and you want a real tree. I grew up climbing in the trees of the Fuerte orchard that surrounded a friend’s house. Another friend of mine grew up with a massive Fuerte shading her two-story house in Whittier. I know of many treehouses built in Fuertes. You won’t be building a treehouse in a wimpy Lamb or GEM.

My Fuerte may not be providing much fruit yet, but at least it is starting to shade the garage in the afternoon and can handle the kids climbing in it.

Find a list of my other Yard Posts here.