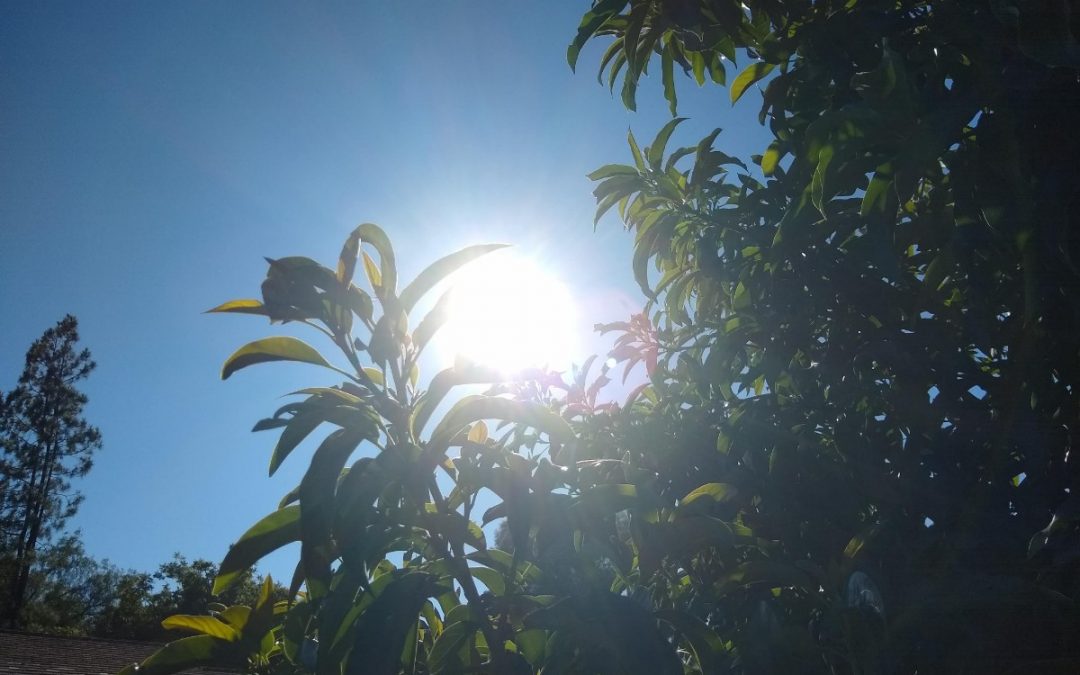 I spent last week — the last week of July — camping next to the beach in Carpinteria, Santa Barbara County. At night I wore a sweatshirt, and during the day I could sit in full sun without feeling hot. The midday high temperature ranged from 68 to 71 degrees. I was reminded of how I felt in the Monteverde cloudforest in Costa Rica where native, wild avocados grow; there the low at night was about 55 and the high each day was about 71: supremely comfortable.

It’s tempting to think of avocados as loving heat because they originated in the tropics, but we must remember that they come from high elevations where temperatures are surprisingly cool. (The avocado varieties that perform well in California do anyway.) Plant explorer Wilson Popenoe once estimated that California’s avocado-growing climate corresponds closely to the climates he experienced in Guatemala at between 6,000 and 7,000 feet in elevation. (“Exploring Guatemala for Desirable New Avocados” in the California Avocado Society Yearbook 1917.)

Getting more specific, one pair of researchers at the University of California estimated that avocados grow best at between 68 and 75 degrees. (See details in this paper.) Now, is that not about where you’d like your daytime thermostat set?

So yes indeed, avocados grow beautifully in Carpinteria, where summertime temperatures are near optimum.

How hot is too hot for avocado trees? Protect them when over 75 degrees?

Fortunately, avocado trees can thrive in heat well above 75 degrees as long as they’re watered sufficiently. But there does come a point on the thermometer at which an avocado tree suffers regardless of how much moisture is in the soil.

Apparently, above roughly 90 degrees avocado trees begin to function poorly. Specifically, the holes in their leaves (called stomata or stomates), which sort of breathe for the tree, begin to close above about 90. (Read more on that here and here.)

Protect an avocado tree when it’s over 90 degrees?

Does this mean we must come to the rescue of our avocado trees when temperatures break the 90-degree barrier? Maybe, maybe not. Depends on the tree and where it’s growing, in addition to how much attention you’re interested in giving it and how much you care about its appearance.

Watering sufficiently is defense number one

While I was in Carpinteria last week, my yard was in the triple digits for a couple days — one day topping out at 103 degrees. I have approximately thirty avocado trees growing in my yard and some are very small. In fact, a couple were planted only four days before I left for vacation. How did they fare in the heat in my absence? Just fine — because I’d set my irrigation schedule to water enough to handle such weather (every day for one hour on micro-sprinklers).

Watering enough is absolutely the most important thing you can do to help an avocado tree cope with heat above its comfort zone.

Here is the one avocado tree, a young Sharwil, that was slightly damaged by that 103-degree day:

Do you even notice the damage? Some leaves are bleached.

An interpretation might be that if the temperature is just over 100 for a few days, a young tree that is healthy overall and watered well should only get some bleaching on a few leaves. That’s not real damage. Because of that, my rule of thumb is that unless it’s over 105 degrees, protection beyond good watering is unnecessary to prevent a healthy avocado tree from real damage.

But what if you don’t like bleached leaves? I don’t. So I shaded most of my other young avocado trees while I was away. Here is another young Sharwil tree that had been shaded with a piece of 60-percent shade cloth overhead:

Unbleached foliage because of the midday protection from the shade cloth. The way I use shade cloth for my young trees when I’m home (not on vacation) is usually to place some over the top if the temperature gets around 95 degrees or over. I use clothespins to fasten it to the top of a cage.

Sometimes though, I leave the shade cloth in place for most of a baby tree’s entire first summer. I’ve found that if the cage holds the shade cloth high enough above the top of the tree, then the 60-percent shade in the middle of every day is enough and not too much.

Shade can help a young tree get through the worst of Southern California heatwaves. Remember a year ago, July 2018? My shaded front porch was 113 degrees two days in a row. Some young avocado trees out in the yard would have been cooked without shade, but I doubled up 60-percent shade cloth over them in the middle of the day and they didn’t show a bit of stress. (Other unshaded avocado trees nearby were sunburned so badly that entire branches died.)

Other methods of providing shade to young trees include setting up a beach umbrella for the day or posting four stakes around the tree and stretching burlap across.

One more thing that is most relevant to protecting a young avocado tree from heat is painting its branches and trunk.

I noticed a young Hass avocado tree while I was in Carpinteria that had a bare branch exposed to the western sun but was barely bronzed.

That branch would be blackened and cracking if it had gone through the 100-degree days in my yard. If you live in a climate like Carpinteria, you can get away with leaving such a branch unprotected. But if you live inland, you’d be wise to paint such a branch on a young tree lest it get sunburned and possibly die in the long run. Young trees often don’t have the mass of canopy to protect themselves like older trees do, and they need our sunscreen to help.

Painting branches is also often called “whitewashing,” and many materials are used to get the effect. I use white latex paint mixed with one or two parts water.

Some people also use a kaolin clay product (“Surround” for example). It can even be sprayed on leaves to protect them from sunburn. I’ve yet to use it myself, but I look forward to trying it out later this summer.

For more on avocado sunburn, see my post “Avocado trees get sunburned — what to do?”

Avocado roots like to grow right at the surface of the soil if they can. If it’s hot there, they can’t. Mulch keeps that level of the soil comfortably cool and hospitable to avocado roots. The more roots a tree has, the more water it can draw up into its canopy to cool itself.  I like to use wood chips around my avocado trees.

Today, it’s in the mid-90s and I felt the wood chips and then felt the bare dirt near the wood chips. The bare dirt was noticeably hotter, and it was so hot that I couldn’t keep my hand pressed down for long. That kind of temperature fries avocado roots. I’ve seen it happen where my chickens have scratched the mulch away in a spot. The revealed roots brown and shrivel rapidly.

Wood chips are not the only option for cooling the soil surface around an avocado tree. I often grow a vine or two on the ground near a young avocado tree, and one reason is to reduce the heat and increase the humidity in that immediate environment.

Usually, in Southern California, when it’s over 100 degrees the humidity is very low. This makes it even harder for an avocado tree to manage the heat. Think of how much more thirsty you get when there’s a spell of Santa Anas and the relative humidity is less than 20 percent.

During such heat, I run the micro-sprinklers under my trees for 15-30 minutes in the middle of the day — sometimes once every hour or two throughout the afternoon — in order to raise the humidity under the tree and within its canopy. I’ve seen a tree with wilting leaves perk up after such a pulse, indicating that it has given the tree welcome relief.

I usually only run these pulses if it’s around 105 or higher, but earlier this year on June 10 and 11, we had a couple of days of only 100 where I pulsed a couple times each afternoon under trees that were carrying small young fruit. It was especially my Reed avocado tree that I was worried about.

Reed avocado trees bloom late, all the way through June this year, and so on June 10 and 11 my tree was carrying very small fruit. Such fruit are easily affected by heat and can be dropped by the tree. I lost hundreds of Reed fruit in the heatwave last July, and I was determined not to let that happen again.

So I was pulsing the sprinkler under the Reed when it was only 100 degrees, and I was also spraying its leaves by hand with a hose. This works to cool a tree even better. The tree shows relief almost instantly if the leaves have wilted: within seconds they stiffen.

This evaporative cooling method has been used on avocados for over a hundred years, and it was formally studied back in the 1960s, and a report was published in the 1963 California Avocado Society Yearbook called “Cooling Avocado Trees by Sprinkling.” The report says, “Temperature reductions up to 5 and 7 degrees were obtained.”

It’s clear that wetting down a tree cools it; the challenge is how to do it. Spraying trees with a hose takes time and effort. I’d love to find an easy way to automate it. In the meantime, hundreds of small Reed avocados are worth a hot afternoon spraying with a hose for a few minutes.

Is it worth protecting avocado trees from heat?

Can our avocado crops really be saved in hot inland locations? Is it even possible to grow avocados well here?

I will answer with the story of a visit I made this winter to a tiny avocado farm in Redlands, San Bernardino County. Do you know Redlands? It’s even hotter than Ramona, where I am. Redlands is extremely hot in the summer for avocados. The average August day in Redlands gets to 96 degrees — average.

The owner’s avocado trees should not have been growing and fruiting as well as they were. But the evidence was undeniable. His trees carried as much mature fruit as the most productive groves I’ve ever seen in more hospitable locations, like Carpinteria — and this meant that they’d carried this fruit through the July 6-8, 2018 record-setting heatwave.

How did he do it?

His Pinkerton tree had enough fruit to break branches:

He said to me at one point when we were walking through his grove, “My neighbors kept telling me last summer that I was watering too much. But if the new trees went a day without water they would wilt.” So for most of the summer he had watered once in the morning and once in the evening, every single day. (He used micro-sprinklers.) I probably would have also told him he was watering too much with that schedule, but I would have been wrong. Look at his trees.

How was he growing avocados so well in a hot inland location? He was doing many things right, but most importantly he was not skimping on water. Don’t skimp on water with avocados in the heat. It makes them very uncomfortable.

Want to read something fun? Here is a discussion among early avocado growers in California after the devastating heat of June 1916.