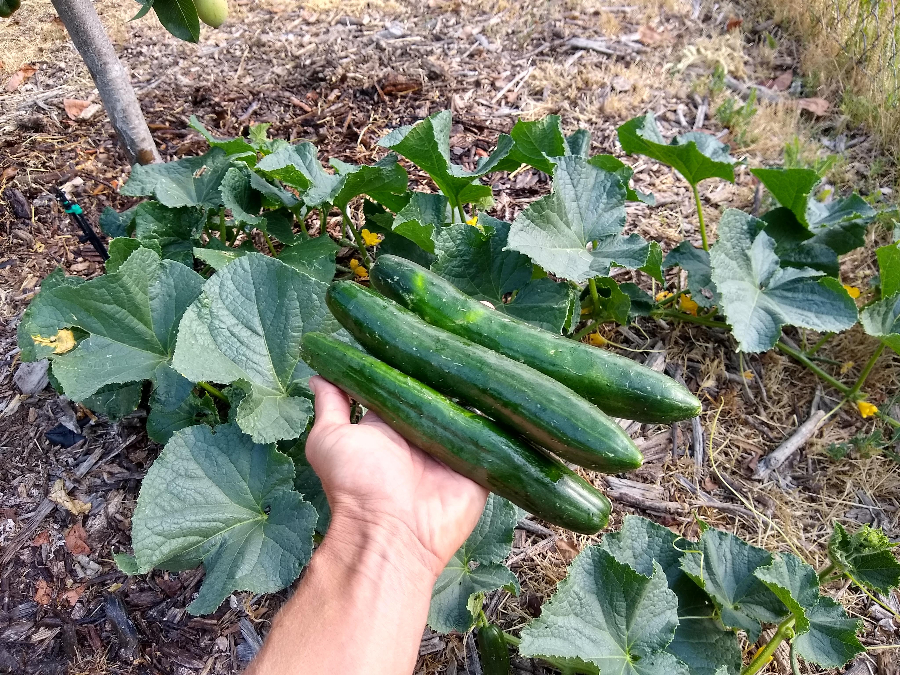 Even on a hot summer day, I can go into the yard and pick a cucumber and bite into it and feel cooled and refreshed. How does that work?

There’s no other vegetable quite like a cuke. I need to have them in my garden. Here’s how I go about accomplishing that.

Some varieties of cucumbers are never bitter. These are the only kinds I grow nowadays. Favorites include Green Fingers, Summer Dance, and Sweet-Slice. (See my post specifically on Green Fingers.)

My family likes pickles so I also grow some other varieties for that. It doesn’t matter if those varieties taste bitter if eaten fresh because the pickling process removes that. For pickles I like the varieties Alibi and National Pickling. These can both be eaten fresh too, but their skin is thicker and more spiny.

I grew one such cucumber-melon last year, kindly sent to me by Jay of Cucumber Shop. The variety goes by the name Striped Carosello Leccese, or Meloncella Fasciata. It is apparently an old variety from Southern Italy. Here is a video of Jay talking about the variety.

My Striped Carosello Leccese plants grew well and produced well. The fruit was attractive with its stripes. It had no spines like some cucumbers do, but it did have fuzz on the skin. The texture was crisp and the flavor very mildly sweet. I’ll be growing some again this summer.

I water cucumbers just like my other vegetables. (See this watering cheat sheet for tips.) And I water them amply so that they grow and produce well; however, I no longer attempt to use watering as a way to avoid bitterness. That never worked for me despite the claims by some that bitterness in cucumbers is related to insufficient or “uneven” watering (a vague term that I find unhelpful).

I use variety choice to avoid bitterness. Grow the right variety and you get no bitter cucumbers. It’s as simple as that. (See above for some such varieties.)

If you do end up with bitter cucumbers, you can cut off the ends and peel them since the ends and the skin is where most bitterness accumulates.

Cucumbers like warm weather. They don’t grow through the winter well in Southern California. Plant them as early as April (sow them in containers indoors as early as March), and plant them as late as July (sowing in June). You can plant a bit earlier or later if you want to gamble on the weather, but April through July is reliable every year for me.

Here are some details about optimum air and soil temperatures for cucumbers and some information about the commercial growing practices in California.

Cucumber varieties differ in the size of their plants and vining tendency. Some are called “bush” types because they don’t run very far. But for most regular cucumber varieties a space of about 1.5 feet between plants is sufficient.

I usually don’t grow my cucumbers in a row with my other vegetables though. As with other vining plants like melons and pumpkins, I prefer to grow cucumbers under the south sides of my fruit trees since there’s more space for them to spread there. (See my post, “Growing vegetables under fruit trees.”)

Cucumber vines have tendrils and can climb. Giving them something to climb on has benefits: the cukes are easier to pick, they are less often munched by bugs, and it saves ground space.

Cucumbers can climb on string, a net, a tomato cage, a chain link fence, and an apple tree.

The main enemy of my cucumber plants in the past few years has been a microscopic creature that lives in the dirt: the root knot nematode. Cucumber roots are very susceptible to these tiny worm-like animals that cause the roots not to function well, and therefore hurt the plant growing above ground. (See my post, “What are root knot nematodes?”)

My main solution has been to not grow cucumbers where I know the dirt has root knot nematodes. I’m aware of no cucumber varieties with RKN resistance.

Lots of little insects bother cucumbers from time to time, such as aphids and whiteflies. There are concoctions you can buy to spray on these pests. I don’t spray but I do sometimes blast the plants with water to try to keep those insect populations down.

Powdery mildew also infects cucumbers. This fungus causes white spots on the leaves. There are concoctions you can buy to spray on powdery mildew also, but if you find this disease on your plants often you should first be sure to plant varieties that are resistant. Sweet-Slice and Summer Dance claim resistance to PM, and I’ve never seen it on those varieties in my yard.

You can pick cucumbers when they’re only a couple inches long; they’re already crisp and tasty. My kids do this. Or you can wait until they’re six or more inches long – all varieties grow to different lengths. Just make sure you pick them before the skin yellows (for most varieties, not lemon cucumbers, of course).

Fresh cukes store well in the fridge for over a week.

When your plant is pumping out more cukes than you can eat fresh, make some pickles. Easy pickle recipes are everywhere.

My son was watering some vegetables yesterday and asked, “Dad, what’s your favorite vegetable?”

“Mine is cucumbers,” he said.

I already had this post half written and planned to published it today. He didn’t know this. I smiled and thought, Cucumbers is a good choice, Miles, especially today.

Thank you to all Supporters who send in some money to keep these Yard Posts coming and keep the whole website ad-free. If you find The Yard Posts useful, check out how you can support it HERE.