What kind of avocado tree do you get when you plant a seed? 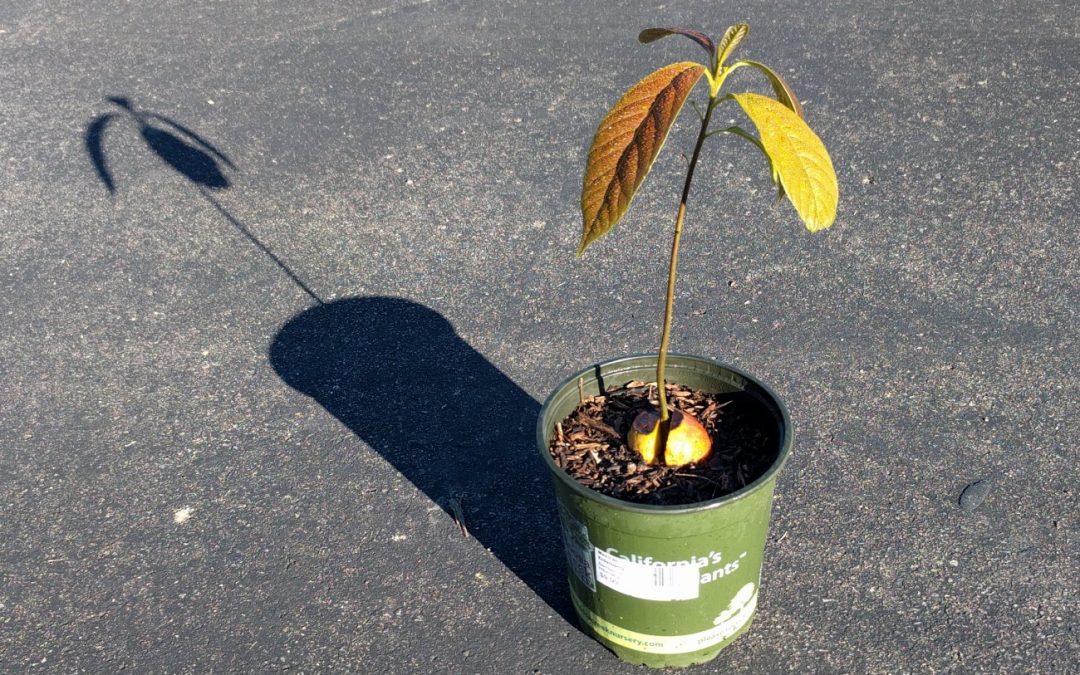 I begin with the story of two avocado trees grown from seed. These trees are related yet separated by about ten miles and eighty years — and they illustrate a thing or two about what kind of tree you can expect when you plant an avocado seed.

In 1926, a man named Rudolph who lived in a rural part of Los Angeles County bought and planted many sprouted avocado seeds on his sloped property. He intended to let those seeds grow for a while and then graft the young trees to the best avocado variety of that era, the Fuerte. Rudie, as friends called him, mostly succeeded in that. One exception was a seedling tree that never took to the graft attempts and instead eventually started making its own fruit, which was peculiar compared to the Fuerte.

The fruit had pebbled skin. It was ready for picking in the summer, and once picked the green skin turned purple as it ripened. Cut open, you’d find a smallish seed. And the tree produced lots of this fruit, year after year (a great improvement upon the erratically bearing Fuerte). Oh yeah: the creamy flesh inside had no fiber and an excellent nutty flavor.

Rudie decided that his tree was so good overall that he applied for a patent, and on August 27, 1935 he was awarded plant patent 139. He named the avocado after himself, his full name being Rudolph Gustav Hass.

(See a photo of the Mother Hass avocado tree when it was 19 years old here.) 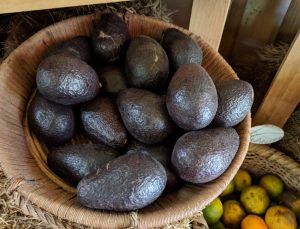 Rudolph’s avocados are now eaten around the world, these ones being for sale in a market in Costa Rica.

In 2007, a few cities away in Los Angeles County, a seed from a Hass avocado sprouted out of the compost heap in my mom’s backyard. She allowed it to grow, and grew and grew it did. In fact, it quickly rocketed up to near twenty feet. 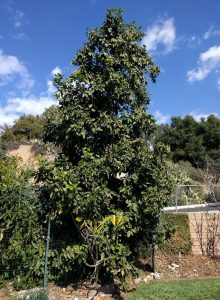 In the spring of 2013, the tree flowered. Fruit started to grow. And then we began test-picking it, not knowing what it should look like when it was mature.

See, the fruit didn’t look like Hass fruit. Although the tree grew from a seed inside a Hass fruit, the fruit on my mom’s tree had smooth, thin green skin with little yellow dots. Then as it hung on the tree longer, the skin did start to turn black like Hass. Would the inside look more like Hass? 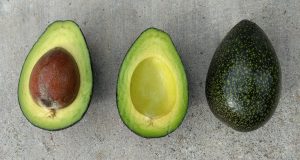 The flesh was slightly greener than Hass, and although the taste was excellent, it had some fiber. In subsequent years, this stringiness has reduced, but it is still not as smooth as Hass. Nor is the seed as small as Hass.

It’s a decent avocado. One particularly convenient quality of the fruit, we’ve found, is that it is near prime in flavor around Thanksgiving, which is earlier than many other avocado varieties in Southern California, including Hass.

So the tree is a keeper although it is not nearly so good that my mom is about to apply for a patent.

What can you expect if you plant an avocado seed? Since most avocados eaten in the world today are Hass, let’s say it’s a Hass seed that you plant. The short answer is, expect the unexpected.

“For the Hass, like most avocado lines, carries much hidden genetic variability (“heterozygosity”). So it is impossible to predict its breeding behavior.” So wrote Bob Bergh, who was a plant breeder at the University of California, Riverside, and who ran their avocado breeding program for four decades, and who probably grew more avocado seedlings than any other human to this day.

Bergh observed this genetic variability over and over again, most strikingly after planting seeds from Hass fruit that were as purely Hass as possible. He caged Hass avocado trees and put bees inside the cages so they would pollinate the flowers but there was no chance of cross-pollination by other nearby avocado varieties. Then he planted the seeds of the fruit that resulted from that caged, self-pollination — just over 300 seeds.

He reported some of the results in 1973 in a paper titled, “Self-pollinated Hass Seedlings.” You must look at the photos of the fruit shown in that paper. Click the link and then come back. You won’t believe the variation you see.

(Also check out the differences in trees that came from seeds of an old variety called Puebla in this article: “Notes on the Fruits of Seventy-five Puebla Seedlings.”)

While Bergh did discover that some of the seedling trees eventually bore fruit that looked a lot like Hass, others bore fruit with giant seeds, and some fruit had long necks, or were totally round, or tiny, or never turned purple black, or had strange ridges on their skin, or were ready to eat in the winter (like my mom’s Hass seedling fruit). “Who would have thought that beautifully formed ‘Hass’ was hiding these monstrosities in its genes!” wrote Bergh.

So when you plant your Hass seed, an avocado tree will grow that will produce fruit of unknown, unpredictable characteristics.

Is the Hass variety unique in this respect? Hass does apparently have more genetic variability than some other avocado varieties, but no avocado variety’s seedlings will produce fruit exactly like the parent.

Bergh: “We have looked at thousands of avocado trees produced by selfing and have never found two from a given parent that were identical or even close to it.”

This is good news, of course. It allows for the possibility of improvement. 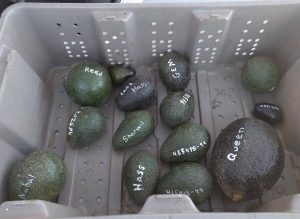 Plant the seeds of any of these avocados and only one thing is sure: the fruit you’ll get from that tree will be something new.

(Then how are the named avocado trees we buy at nurseries made, if not by growing seeds? They are grafted, usually onto seedling trees. See my post, “Your fruit trees are grafted — Why? And so what?”) 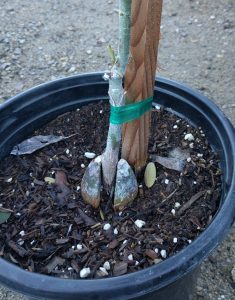 Grafted avocado tree at nursery: note seed and graft that looks like a V right above green tape.

How long until a seedling avocado tree produces fruit?

I have read of seedling avocado trees that “never” produce fruit, but I’m not sure how long these trees were given the opportunity to fruit before being pronounced barren. I do know that in his breeding program, Bob Bergh said that if a seedling hadn’t produced fruit within 10 years he removed the tree.

I know of some old seedling avocado trees that rarely have fruit, and when they do they have very few. But I can’t say that I’ve ever seen an avocado tree that never fruited. Then again, if a tree takes more than ten years to have any fruit, and then it has very few fruit in subsequent years, it’s not much of an avocado tree; it might as well be called a shade tree.

Regardless, it should be remembered that all avocado varieties are more or less fruitful, and precocious. Some flower and produce fruit when they’re very young, such as Gwen, while others are notoriously slow at beginning to fruit, such as Fuerte. And some, like Pinkerton, consistently make more fruit than most other avocado varieties.

Another reason not to cut down my mom’s seedling tree: it makes a lot of fruit, consistently. 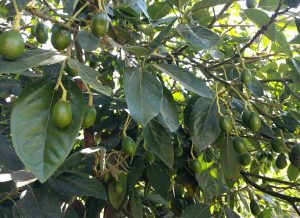 Whether or not you find your seedling avocado tree’s fruit good depends on your standards. While it is highly unlikely that the fruit will be inedible, the likelihood is exceedingly slim that it will produce fruit that is as good as today’s best varieties. This should be obvious if we just remember how these preferred varieties rose to that status.

In Southern California alone, people have been growing seedling avocados for a long time. Way back in 1915, Wilson Popenoe described 86 most-promising avocado varieties. Only one year later, in 1916, Ira Condit had 140 avocado varieties of interest to describe. That was over a century ago now. In the interim there have been hundreds of thousands of seedling avocado trees grown and assessed and fruit tasted. Varieties have been left for extinction and a select few have been shared and propagated.

The varieties that we keep around today are so good then, that they are better than thousands upon thousands of seedlings that have been allowed to fade away. It’s not easy for a new avocado today to make it as one of the select few. So many good qualities have to align within one avocado variety in order for it to be good overall that it’s far more likely that a seedling will be merely decent like my mom’s rather than amazing like Rudolph Hass’s.

Not only does an all-around awesome eating avocado need to have the taste that you desire, but its color is important. (Bacon avocados suffer from a pale flesh color.) The avocado shouldn’t be too small (Mexicola) or too big (Queen); it has to be easy to tell when the avocado is ripe (Nabal has a shell-like skin, unfortunately); and it should have a small seed, plus a seed coat that adheres. 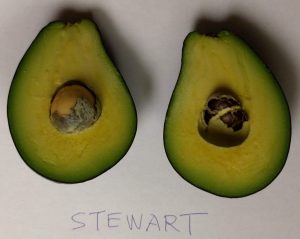 Stewart avocados are delicious and their seed coats sometimes adhere, but it’s annoying when they don’t.

The list of desirable characteristics go on and on toward impossibility.

Nevertheless, we tilt at windmills. Among my grafted avocado trees, I plant seeds too. Because what if, you know?