Your fruit tree is grafted — Why? And so what? 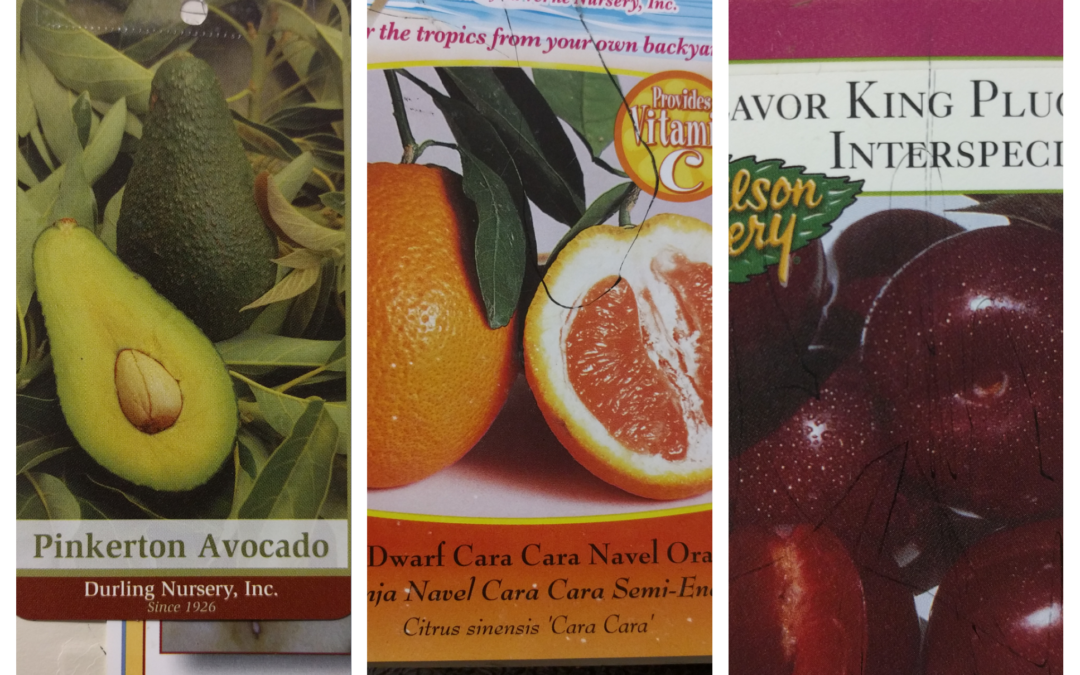 We buy a fruit tree — a Pinkerton avocado, a Cara Cara navel orange, a Flavor King pluot — and we think the tag tells us what we’re getting, but it tells only half the story. Almost every fruit tree you buy has been grafted. In other words, almost every fruit tree is two trees in one. Why are they doubled up like this? And what difference does it make to us, as we care for it in our yard?

Why fruit trees are grafted

See pictures of how variable the fruit is from trees that all grew from Hass avocado seeds in this article.

That’s why fruit trees are grafted. Because it’s the only way to replicate them. (There are a few exceptions, like figs and pomegranates.)

What is grafting? In the simplest terms, it is connecting one tree to another, such that they fuse and grow together.

It’s unfortunate that the labels that come on the fruit trees we buy do not tell us that the trees are grafted. They would also do well to warn us about rootstock suckers.

Have you identified the graft unions on your fruit trees? If not, I’d recommend doing so today. It could save the lives of your trees. Here are examples of graft unions on some of my trees. 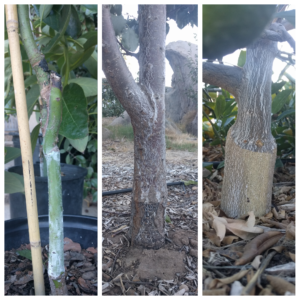 You’re looking for a change in shape or color in the trunk, usually around six inches above the ground. That’s where the rootstock connects to the scion (the top part of the tree that gives the fruit you want). Sometimes the graft union is obvious, but particularly on old trees it can be hard to make out.

And here is the reason you want to locate this union: Any branch growing from below it must be removed, and hastily. A branch growing from below the graft union is called a rootstock sucker. If left to grow, it will probably eventually produce fruit, but its fruit will not be the Flavor King pluots or whatever kind of tree you bought. It’s fruit will be nasty, or at least strange.

Have you ever heard anyone say that their orange tree is producing some sour fruit? One of my neighbors said so, and she proffered that the orange tree might have cross pollinated with a nearby lemon. Nope. Doesn’t work that way. Rootstock suckers.

This brings us to the more urgent reason to remove rootstock suckers immediately. If left to grow, they often overtake the scion (e.g. Flavor King pluot). They shoot up very fast, grow taller than the top (scion) branches, shade them out and kill them. In time, your tree morphs from the tree you bought to a tree whose fruit is all mysterious.

When we moved into our house four years ago, there were many neglected fruit trees in the yard. The previous owners had been elderly and lost the interest or ability to care for them. One of the trees looked like a huge peach bush. That summer, it bore many small, bland peaches. Eventually, I climbed in and found that inside there was a thick trunk of an old peach tree that was now engulfed by numerous, more vigorous rootstock suckers. The old peach branches in the middle were barely still alive. I saved that old peach.

Watch a video of Don Durling, of Durling Nursery, showing how he grafts (buds) citrus trees. Durling supplies citrus trees to many retail nurseries in Southern California. This excellent video is on Martha Stewart’s website, of all places. Durling shows his grafting starting at 2:15.

And notice how avocados are grafted using a different method in this video from an avocado nursery located in New Zealand. The same method (usually called “tip grafting”) is used in nurseries here in Southern California. The actual grafting can be seen starting at 1:45.

Grafting avocados, the best how-to resource I know of