The Reed avocado tree: a profile 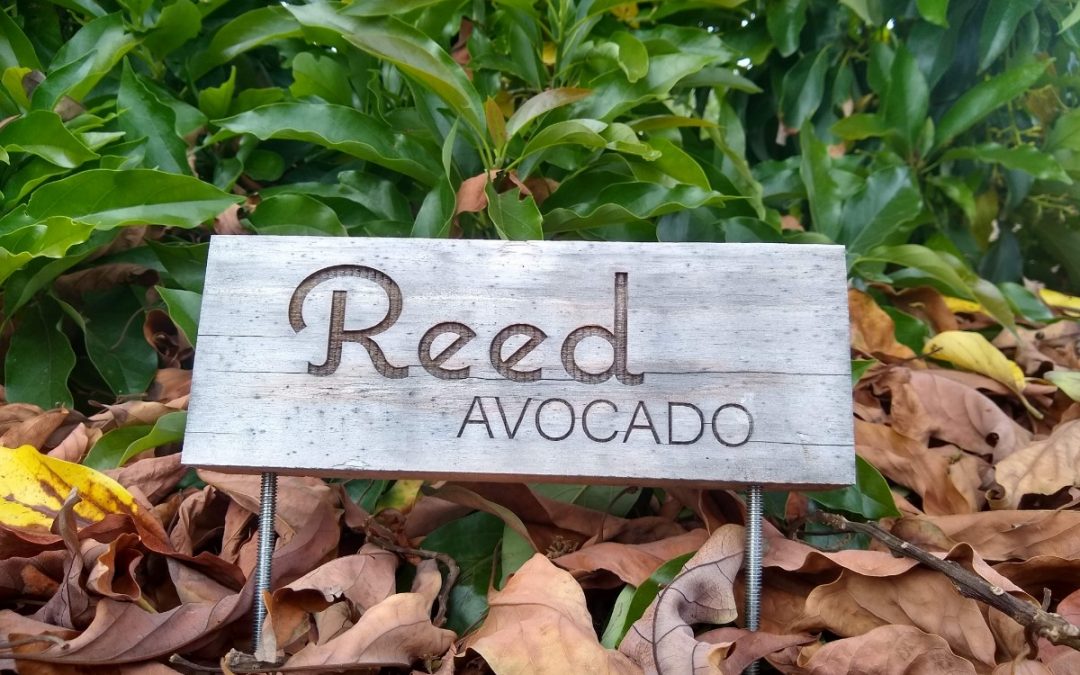 The Reed avocado variety is the first I ever grew. It is a great beginner’s avocado tree because it is relatively tough and productive. In addition, the fruit itself stands among the finest tasting avocados so it deserves consideration for planting by the first-time grower and the avocado aficionado.

Here are characteristics of the Reed avocado fruit, its history, the tree’s shape and growing habit, and a few remarkable strengths and  weaknesses — all in order to help you decide whether a Reed avocado tree deserves a place in your yard.

Reed avocados are green cannonballs. They are big and round and heavy. Although not as thick and hard as the skin of a variety like Nabal, Reed’s skin is shell-like such that it is ideally suited to scooping the flesh out with a spoon.

And a Reed half is a ready-made bowl for its own guacamole. (See “My favorite way to eat a Reed avocado.”)

Two downsides of Reed’s thick skin, however, are that it is challenging at first to discern when the fruit is ripe. What I sometimes do is pop off the stem button. If it pops off easily, it’s ripe. You can also poke a toothpick into the flesh through the stem opening to test its softness. But as a rule, cut into a Reed avocado before it feels very soft through the skin because if it does, it’s actually overripe.

A second downside of Reed’s skin is that, when cut open, it leaves bits of grit on the outer edge of the flesh similar to the varieties Lamb and GEM. Both of these negatives of Reed’s skin are inconsequential to the overall enjoyment of eating Reed avocados, but they are there.

The flesh of Reed is among the creamiest and smoothest of any avocado I have eaten. The eating experience always reminds me of firm, avocado-flavored butter.

Even though the seed of a Reed is fairly large, since it is a big avocado, it does not seem so in relation to the quantity of flesh.

In fact, Reed avocados are a bit bigger than I prefer. Some others feel this way too, and this is one reason that Reeds don’t find a home on the shelves of most grocery stores. But the main reason is that Reeds are the wrong color. If an avocado doesn’t turn black as it ripens, it has no chance in the commercial avocado climate of today because it will show black spots on its green skin that have been caused by mishandling of the fruit on its way from the farm to the eater.

As one avocado farmer put it, “Reed avocados are not meant to be sold by those who wish to treat avocados as rocks rather than a delicate and perishable fruit.”

Luckily, the Reed fruit coming off a tree in your yard will be treated delicately and never have such problems.

Black skin was not a de facto requirement in a new avocado variety when Reed first appeared, some 70 years ago. It was around 1948 when the seed that produced the original Reed tree germinated on the property of James Reed in Carlsbad in San Diego County, California. Mr. Reed patented the variety in 1960. In 1967, the first mention of the Reed avocado was made in the California Avocado Society Yearbook in this article written by Oliver Atkins. In the early 70s, many growers in San Diego County were planting the Reed variety to try it out. At this time, the green-skinned Fuerte variety was still popular and it was thought that avocados with green skin had commercial potential. But soon the black-skinned Hass became dominant — with growers and eaters — and avocados with green skin have never again found a place in the market outside of specialty or farmers markets.

(This is true of most of the United States as well as much of the rest of the world although there are still many tropical locations that continue to grow and consume plenty of green-skinned avocados.)

For the home gardener, however, the skin color of an avocado is irrelevant. We are interested in a hundred other qualities, but skin color is not one of them. Tree shape is.

Reed avocado trees tend to grow more upright than some other varieties, such as Hass or Fuerte. In fact, they are so prone to standing erect that Reeds have been given a second life as a commercial variety because they are conducive to the “high density” growing method that is popular with avocado farmers today. With high-density plantings, a farmer grows avocado trees very close together and prunes them frequently to keep size in check. The result is that the trees are easier to pick and more fruit is produced on less land.

Through pruning, this distance can be sustained. But a Reed tree will grow far wider if left unpruned. Reed is rightly called upright for an avocado, but it is not a columnar tree in a more general sense.

Individual branches on a Reed tree will in fact droop horizontally and sometimes weep all the way down to the ground when laden with heavy fruit. I have had to prune side branches on my Reed many times because of this behavior. It both encroaches on neighboring trees and it exposes fruit and branches to sunburn.

Nonetheless, a Reed avocado tree can be one of the most attractive of all avocado varieties. If watered moderately well, its leaves will appear healthy and green all year long in Southern California — this despite the leaf burn that many other varieties often show in the fall and winter, in part because of the constituents in our water. (“Avocado leaves turning brown? Here’s why and what to do.”)

Reed tolerates the salts in our water more than some other varieties, such as Hass. In my yard, Reed is consistently among the best-looking avocado trees during winter when many of my other trees have leaves with brown tips.

Unfortunately, Reed’s flexibility with the heat doesn’t extend far in the thermometer’s opposite direction. It only handles cold about as well as Hass — that is to say, Reed gets some leaf damage when the temperature drops a bit below freezing, and it gets twig damage at around 26 degrees. The lowest my yard has gotten in the past six winters is 26, and during those nights the Reed incurred twig damage as far back as six inches but there was never any damage to the fruit inside the canopy, and the tree still flowered reasonably well the following springs.

Reed is a late bloomer. It will put out a few flowers as early as March in my location (Ramona, inland San Diego County) but waits until May and June to peak in bloom. This is later than most other avocado varieties, and it is a great advantage in terms of turning flowers into fruit. (* Usually . . . see below.)

In May and June the air is warmer, which is more conducive to pollen tube growth during the pollination process of avocado flowers. And in May and June there are more bees and other pollinating insects active and visiting avocado flowers, which leads to increased pollination. This year, as I write this post on June 28, my Reed is still opening new flowers. The other varieties that bloomed in my yard this spring have been finished flowering for approximately a month already.

One might suspect that it is a disadvantage for Reed to flower mostly at a different time from other avocado varieties because it reduces the potential for cross-pollination. But the evidence shows that Reed has no need. Farmers who grow Reed do not bother planting pollenizers (B-type avocado trees) to help with pollination, and they get lots of production. I’ve seen numerous Reed trees in yards throughout Southern California that make lots of fruit and yet have no other avocado tree nearby or have only another A-type avocado tree nearby.

In my own yard, my Reed has a Lamb avocado tree near it. I wondered if the Lamb flowers’ pollen was helping the Reed set more fruit. But in the spring of 2017 the Lamb did not flower at all and yet the Reed still set a heavy crop.

Reed avocado trees set fruit well, they do so regardless of the presence of other avocado trees nearby, and they set fruit consistently — year after year. This is the case with my own Reed tree as well as all Reed trees I’ve observed in other locations. (Compare Reed to Lamb, for example. Though the Lamb adjacent to my Reed took 2017 off, my Reed has never taken a year off.)

*So, usually, Reed’s late bloom is an advantage, but in 2018 it turned out to be a vulnerability because that July’s heat wave was so intense and came so early in summer, just after the Reed bloom finished, when the baby fruit was very small. The smaller (younger) the avocado fruit, the more vulnerable to stresses.

This spring’s fruitset is once again looking healthy for eating in summer 2020. Let’s hope for no extreme heat in the near future.

Before Reed avocados are ready to be picked, they look ready to be picked. The flowers turn into fruit in May or June, and then by December the fruit is big, but don’t be fooled. The fruit need six more months on the tree, for a total of over a year.

Reed is a summer avocado (a “second” summer avocado, you could call it). If you have a Reed tree right now, you might have tiny young fruit on the tree hanging next to large mature fruit: two crops on the same tree at the same time.

I have picked Reeds from my tree as early as May and found them to taste acceptable, but they don’t taste great until deep into summer. If you live up north or in a milder climate within a couple miles of the beach, you’ll find that your Reed avocados take longer to build flavor so you’ll probably want to pick them later, maybe not until the very end of summer. Your Reeds will also hold on the tree and still taste good through fall. In my hotter inland location, I pick all of my Reeds usually by sometime in September or else they start to taste chalky.

Is Reed a fit for your yard?

But what if you only have room for one avocado tree in your yard? Should it be a Reed? Maybe, maybe not.

Reed would be a good choice if the allotted space is not so wide but can go tall, something like 10 feet wide and 15 feet tall (although you could keep it smaller if you wanted) because of Reed’s tendency to grow up more than laterally. Reed could work, but would not be the ideal choice, if the allotted space were wider but not so tall.

Also, remember that Reed avocados are big. Do you want big avocados or would you prefer smaller, Hass-sized fruit? If I didn’t have a family of five to eat through large fruit, I might go for a smaller-fruited variety as my lone tree.

Finally, are there better summer varieties than Reed? There are other very good summer varieties, to be sure, such as Lamb and Nabal. But overall, considering eating quality, tree strengths and weaknesses, and bearing habits, I think I would choose Reed as the best summer avocado variety to grow in Southern California.

Here’s a brief video profile of the Reed avocado tree:

The Lamb/Hass avocado tree: a profile

What is the best kind of avocado tree to grow?