The Bacon avocado tree: a profile 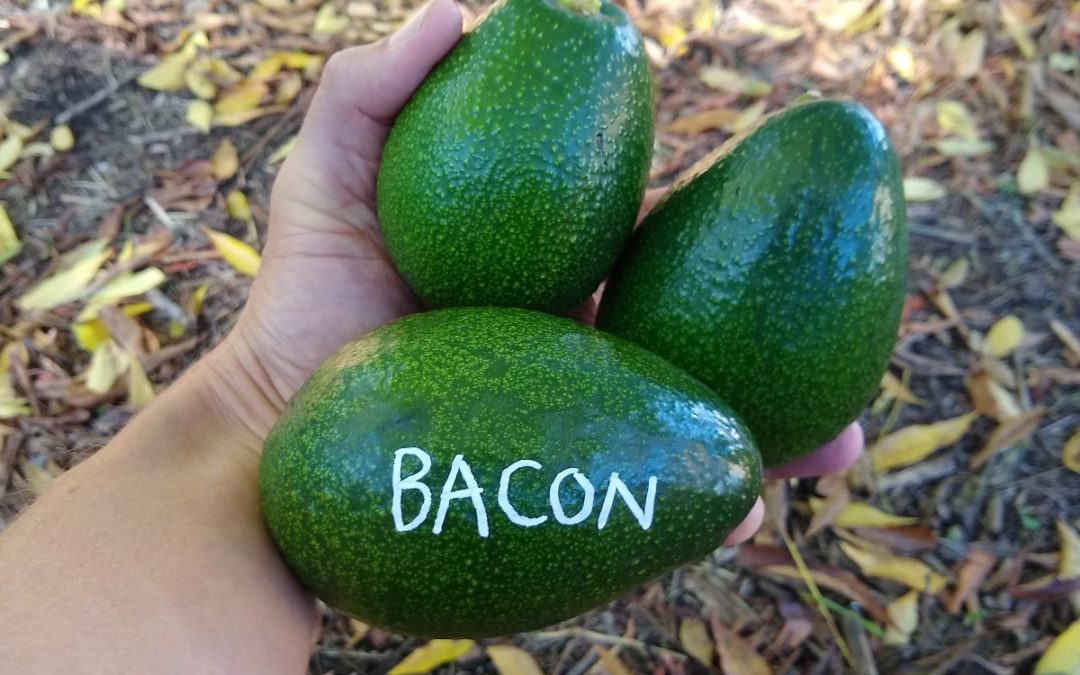 Below is my Bacon avocado tree, which is older than me. I don’t know who planted it, and it’s on public property.

Okay, so this isn’t officially my Bacon avocado tree, but it feels like that sometimes because I’ve been picking its fruit and paying attention to it for more than a decade when almost no one else has. More on this specific Bacon avocado tree later.

For now, let’s aim towards answering the question of whether you might like to plant a Bacon avocado tree in your own yard through discovering the variety’s history, strengths, growth and bearing habits, and first and foremost, the fruit’s taste.

A Bacon avocado has green skin with bright yellow dots, and the bottom end often has a dark spot, but the skin doesn’t change color overall as it ripens. The shape of the fruit is oval, similar to a giant egg. And Bacon avocados are bigger, on average, than Hass although not as big as Reed.

Cutting open a Bacon avocado leaves you with the impression that its seed is medium to large and its flesh is pale yellow. There’s not much green even at the perimeter of the flesh of a Bacon, especially compared to some varieties like Lamb.

Scooping it out to eat, you feel how smooth, creamy, buttery the texture is. That texture is Bacon’s prime distinguishing characteristic. But you also notice how thin the skin is. It’s annoyingly thin, and the skin won’t peel easily yet a spoon easily, accidentally cuts into it.

I like to use my Bacon avocados as slices on sandwiches or toast. On toast, I often add a dash of hot sauce.

I prefer other avocado varieties for guacamole or as cubes in a salad. In these instances I want a stronger flavor; Bacon is too mild. Bacon’s smooth texture is superior but the flavor is subtle, with a hint of sweetness. It is not the strong, anise-type flavor of a Mexicola, nor the nutty rich flavor of a Fuerte or Hass.

Some people call Bacons bland. They are indeed relatively bland. But Bacon’s texture in combination with its taste is preferred by some, especially in certain situations. My kids and I love to sit down in the yard and share slices of Bacon avocados drizzled with lime juice.

Once I attended an avocado tasting in May that featured about a dozen varieties, and more than one taster ranked Bacon first.

Here is a short video I made profiling the eating qualities of Bacon avocados:

Nothing to do with cured pork, these avocados are named after James E. Bacon, who grew the original seedling tree of this variety on his ranch in Buena Park right by Knott’s Berry Farm. The seed was said to have been planted about 1928, and it was registered with the California Avocado Society in 1948.

In the 1950s, Bacon avocado trees began to make an impression on the industry, at least in Orange County. From an article in 1957: “A vigorous, upright newcomer, the Bacon is challenging the Fuerte in the colder areas of this county. It’s showing real promise.”

In the 1960s, growers continued to see a positive future for the Bacon variety. “The fruit is of excellent quality,” said one farm advisor in 1967. “The Bacon trees observed were outstanding in their ability to endure a severe freeze,” said a farmer in 1969.

But by 1983, the original Bacon tree was no more. “A motel is now on the site,” it was reported in that year’s California Avocado Society Yearbook.

Anyway, a few years later, commercial avocado growers grew sour on the Bacon variety. As Oliver Atkins, avocado nurseryman, put it in his Report of the Variety Committee: “It is to be hoped that 1987 will see the complete elimination of the Jim and the grafting over or abandonment of a large portion of the remaining Zutanos and Bacons.”

(Jim is the other avocado variety that James E. Bacon developed and named after himself. It is actually a seedling of Bacon. And the Jim avocado is sometimes referred to as the Jim Bacon avocado, which can be very confusing.)

What happened between the 1950s and the 1980s such that Oliver Atkins hoped that farmers would grow fewer Bacon avocados? The main thing was that the market for green thinskin avocados dried up as people got used to eating the black, thick-skinned Hass.

Today, if a farmer plants a Bacon tree it is almost exclusively to be used as a pollenizer for Hass, not to produce Bacon fruit to sell. But home gardeners continue to plant Bacon avocado trees for the fruit and as pollenizers, and for other good reasons.

Bacon avocado trees are among the most attractive with their exceptionally deep green foliage.

The trees also have a more upright shape than most avocado varieties. Young Bacon avocado trees often look like Christmas trees; they stand tall and erect compared to, say, Hass or Fuerte.

Bacon trees show some resistance to the leaf burn due to insufficient watering or poor water quality that often plagues other varieties during fall and winter in Southern California, but most people prize Bacon’s ability to take cold winter nights more. Oliver Atkins once characterized Bacon as “a beautiful hardy tree that stands the cold.” Because of this cold tolerance, growers in the central and northern parts of California are particularly drawn to Bacon.

The variety is commonly said to handle dips down to 24 degrees. It has never dipped down to 24 since I’ve been observing Bacon trees, but I have observed that dips just a bit below 30 have not damaged Bacons.

Bacon is a productive avocado variety. Moreover, I have observed Bacon avocado trees producing well alone, without nearby A-type avocado trees for cross-pollination.

Yet, Bacon seems to be a good pollenizer for A-type avocado trees in order to enhance the fruitfulness of those varieties. As far as my own observations go, I’ve noticed both Pinkerton and Hass trees producing very well when planted beside a Bacon tree.

But since farmers mostly grow Hass these days, formal studies have mostly been done on Hass. In a study in the 1980s, Bacon was found to increase the yield of a grove of Hass avocado trees by almost 50% compared to a nearby grove that did not contain any Bacon trees. (Reported in the California Avocado Society 1986 Yearbook.)

That being said, Bacon isn’t the only B type that can do a good job of providing pollen for A types. In fact, in one study Bacon increased the yield of Hass trees the least compared to six other B types (Zutano, Marvel, Ettinger, Fuerte, Nabal, and SirPrize). (“The California Cross Pollination Experiment.”)

Nevertheless, one might still choose to plant a Bacon over another B-type avocado tree because Bacon tastes better (vs. Zutano), handles cold better (vs. Nabal), has better tree structure (vs. SirPrize), or is likely to bear more of its own fruit (vs. Fuerte and Marvel).

Bacon also has the advantage of being mature and ready for harvest earlier than most other avocado varieties. I associate the beginning of Bacon’s harvest season with Halloween because in most years Bacon starts to taste acceptable on that date.

Bacon avocados usually taste their best starting just after Christmas in inland Southern California. Close to the beach and farther north, you might find Bacons tasting their best a month or two later. As I mentioned earlier, Bacons grown near the coast have seriously impressed taste testers in May.

I’ve picked good Bacon avocados from inland trees in March, but by that time they often begin to deteriorate while still hanging on the tree. The bottom of the fruit begins to crack and spoil.

So the Bacon harvest season runs roughly four months, but is at peak for only about two. That’s not long for an avocado variety, especially compared to a super-hanger like Hass, which will have fruit hanging on the tree up near peak taste for twice as long.

Is Bacon a fit for your yard?

You might consider planting a Bacon avocado tree in your yard if you want avocados to pick in winter. If you already have a spring or summer variety like Hass or Lamb, then a Bacon tree would add a few months of fruit to the beginning of your avocado year.

But you probably wouldn’t want to plant a Bacon as your only avocado tree. There are other varieties that produce as many or more avocados and have a longer harvest season. That’s the kind of tree that you want as your only tree. An exception might be if you live in a location that gets too cold to grow such a variety.

You also probably wouldn’t want to plant a Bacon tree unless you’ve tasted a Bacon avocado. They’re significantly different from Hass. In other words, they’re different from what most of us are used to. My sister-in-law loves Hass and avocado varieties that are similar to Hass, but she won’t even accept free Bacon avocados when I offer. She finds them unacceptably bland.

(Where to find a Bacon avocado to try? Farmer’s markets are your best bet.)

I have other avocado trees in my yard, but I don’t have a Bacon because of the trees that I’ve adopted that I mentioned at the beginning of this profile. Yes, I meant trees, plural. There are actually a handful of those old Bacon avocado trees from which I can pick.

They are growing on the edge of the grounds of an elementary school in the town where I grew up. Like much of Southern California, my hometown was once filled with citrus and avocado groves before it was filled with houses and schools. Luckily in this case, the chainsaws and bulldozers spared some of the old fruit trees as the town morphed from agricultural to suburban.

When I visit my family during winter, I also visit my Bacons. I pick, and I share. In fact, I often recruit my family to join me in the Bacon picking and sharing.

Where to buy an avocado tree

The Reed avocado tree: a profile