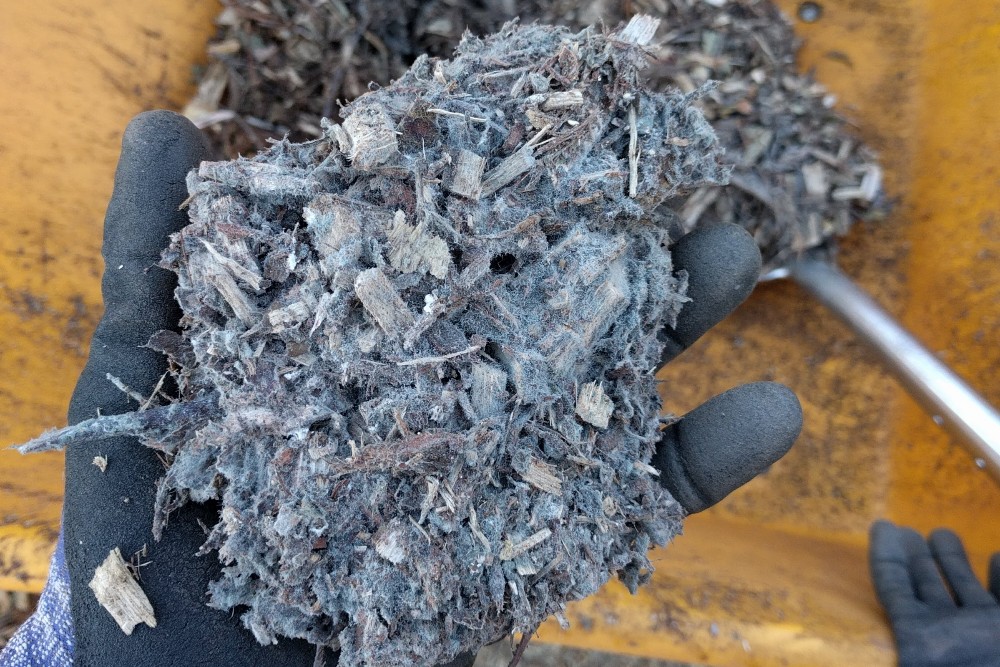 Almost any mulch under a fruit tree is better than no mulch, but there are many ways in which wood chips are the best of mulches.

Wood chips are what comes out of a chipper machine when a tree trimmer puts branches through it. Wood chips are bits of leaves, twigs, bark, and wood. It’s all parts of a tree (or shrub) ground up.

But again, leaves, bark, compost as mulch under fruit trees are good. It’s just that I find wood chips to be even better.

So, you get your hands on some wood chips and it’s time to spread them under your fruit tree. How to go about that?

How much wood chips to add as mulch under a fruit tree?

Dump the chips beside the tree. 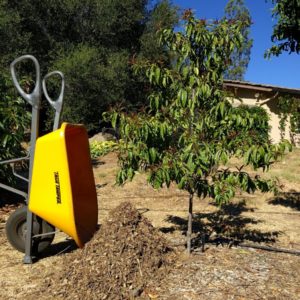 One, or two, or three or more loads. 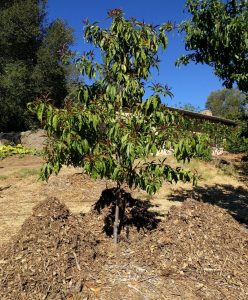 I prefer to add enough for a layer at least three inches thick, as the chips will settle and break down quickly. I’ve added as much as a foot at one time. Even a layer of one inch is useful, but in terms of efficiency and maximum benefits, it’s usually best to make a new layer of around six to eight inches.

Under this tree I added about seven inches. In a month or two, I know from experience, it will shrink down to nearly half that depth. 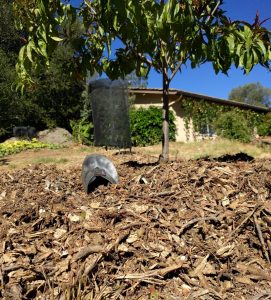 Where to place the wood chips as mulch under a fruit tree?

There’s no benefit — but there is risk of crown diseases — in placing the mulch up against the trunk. So spread the chips from a couple inches from the trunk out to the canopy edge, or a little farther. I always try to go at least a few inches farther.

Basically, the mulch should be covering the soil where most of the tree’s roots are. This is obvious if we remember why we’re putting mulch under the tree.

What are the benefits of wood chips as mulch under a fruit tree?

The benefits of this wood-chip mulch are many. The wood chips suppress weeds, conserve soil moisture, reduce rain and irrigation runoff, feed the worms and microorganisms in the soil below thereby adding fertility, keep the soil cooler in summer, reduce compaction, and suppress some disease-causing microorganisms.

(Read more about the benefits of wood chips as mulch in this paper by Linda Chalker-Scott of Washington State University.)

I’ve seen most of these benefits with my own eyes on my own trees and those I’ve visited.

This tree of mine, a SpiceZee nectaplum, is watered with a mini-sprinkler out near its canopy edge, so that’s where I put the chips.

By the way, if you’re using a dripline to irrigate your tree, the dripline can stay under the mulch or above. Either way works perfectly fine. It’s an aesthetic decision that’s up to you.

And by the way, since wood chips keep the soil under them moist for longer, you can water the tree less often than if it weren’t mulched.

When to add wood chips as mulch under a fruit tree?

It’s now late summer as I’m adding these wood chips to this little SpiceZee nectaplum tree so I have to soak them myself. I could do this by running my mini-sprinkler or by hand watering. But if I don’t soak the chips, then my next normal irrigation won’t get much water down to the roots below because the chips will soak it up.

Wood chips as mulch under fruit trees are the best option that I know of but they aren’t magical and they don’t last forever. I’ve found the need to add new wood chips under my trees approximately once a year. That task will never end. Yet, after many years of adding chips, a layer of dark, rich soil forms between the chips and the native soil. It’s like the layer of humus you find if you scratch back the duff on the ground in a forest. Pretty cool that we can artificially create such a healthy root environment for our trees. 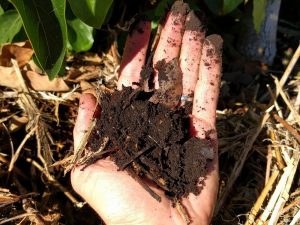 Worries and downsides of wood chips as mulch

Are there any kinds of trees that don’t make good wood chips for mulch? Not that I know of. Eucalyptus, for example, is sometimes rumored to be toxic or allelopathic (inhibit the growth of other plants), but I’ve used lots of eucalyptus wood chips and never seen such problems. Also, conveniently, James Downer and Ben Faber of the University of California wrote a paper on their study of eucalyptus as mulch and found that “Fresh eucalyptus is an excellent mulch . . . “

Can wood chips spread diseases or insect pests? Maybe a tree that was cut down and chipped had a disease and those chips will infect your tree, for instance. Sounds plausible, but I’ve never experienced it and most university researchers I’ve talked to or whose studies I’ve read say that the risk is nil to low.

(Read this article called, “The Myth of Pathogenic Wood Chips.” But also see “Mulch and the Spread of Plant Pathogens.”)

There is always a risk though. And if it scares you, then instead of getting wood chips from a tree trimmer and using them as mulch immediately, you can let the pile sit and dry out and decompose for a while or you can get wood chips that have already been thoroughly composted. See my post on where to get such wood chips: “Where to get wood chips for mulch.”