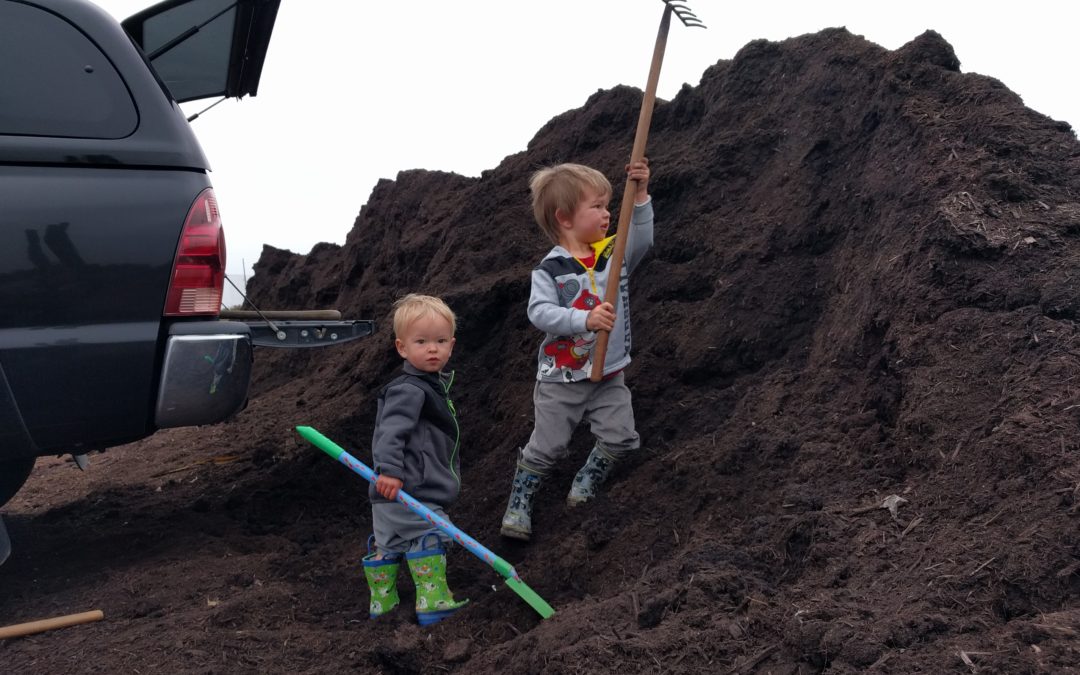 You want your vegetables and fruit trees to grow well and provide you with good food, so you seek advice about how to create the best soil conditions for your plants.

You encounter this recommendation in Sunset’s The Edible Garden book about how to grow broccoli: “Feed with a high-nitrogen complete fertilizer before heads start to form.”

And then you try to figure out how to apply such a recommendation: Feed how much — a tablespoon, a cup, a bucketful? And what kind of fertilizer is considered “high-nitrogen?” What makes a fertilizer “complete?” And then you think a little further and wonder, what if the head of broccoli starts to form before I notice — should I still feed, should I feed more or less?

Maybe you also come across instructions about preparing your soil before planting, such as the tens of pages dedicated to the topic in the book How to Grow More Vegetables by John Jeavons. There are multiple diagrams, side notes, illustrations, suggested tools, and within the text you find the ironic phrase, “Do not strain yourself . . .”

Alas, after crunching your brain figuring out how to apply the recommended fertilizer and getting a workout from all that “double digging,” you’re convinced that fertile soil requires a degree in chemistry and an Olympian’s energy.

You can go that route and you’re likely to get good results. But there is another way. In fact, achieving and maintaining fertile soil can be child’s play.

I learned to grow vegetables and fruit trees while living on the outskirts of a rural village in Africa, where no chemical fertilizers were available and where everyone’s days were filled with chores like fetching water from the spring and hand-washing clothes. Food was grown in the simplest and most expedient way. When I returned to the U.S. and took training classes to become a Master Gardener I learned a lot, but I also very often remember listening to a PhD’s lecture and thinking, “It doesn’t have to be that complicated.”

Well, who am I and how do I know? I’m just a guy who’s been doing it a simpler way for more than a decade now, and I eat the proof that my soil is fertile every day.

For my vegetable beds, I add about two inches of compost each year. I usually add about an inch in late winter before planting tomatoes and corn and peppers, and then I add about an inch again in late summer before I plant my cauliflower and cabbage and onions. There’s nothing special about those times; it’s just when I usually do it.

I merely spread the compost on top of the soil. I don’t dig it in. There’s no need. It gets incorporated into the soil naturally, eventually. 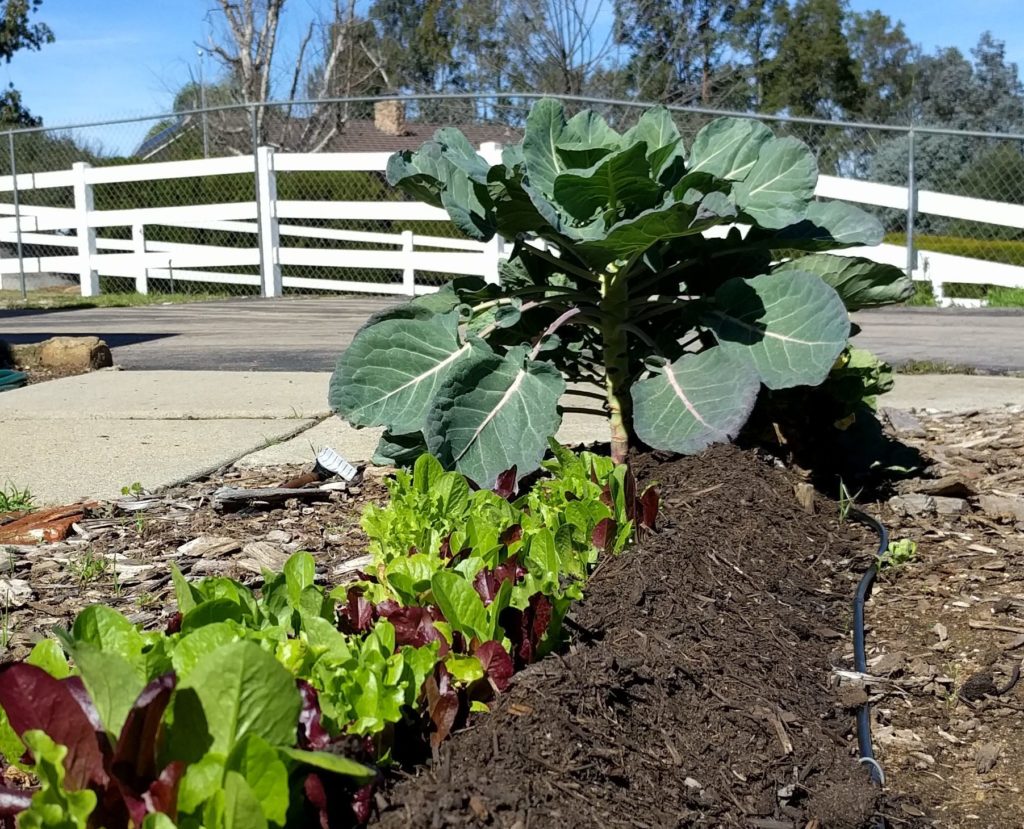 Compost laid; to be spread once lettuce is harvested.

Sometimes I use compost that I’ve made in my yard, which includes some of our chickens’ poop, and sometimes I use compost from the Miramar Greenery in San Diego, which is what my sons are helping me load in the photo at the top. I’ve noticed over the years that plants grow better with my compost compared to Miramar’s, but unfortunately I’ve not yet been able to produce enough of my own.

For my fruit trees, I sometimes add a little compost too, but only if I have more than my vegetable beds need. Mostly for the fruit trees I just keep a thick layer of wood chips as a mulch under them. Over time, the wood chips break down and are incorporated into the soil just as the compost is in the vegetable beds, but I tend to only replenish the wood-chip mulch once a year. I like to do it now, in late winter, so the rains soak the mulch for free, but I do it at other times if good wood chips become available then. I aim for a new, replenished depth of about five inches each time. There’s nothing magical about this depth, but a thinner layer will vanish into the soil more quickly and a thicker layer gets awkwardly close to low-hanging branches. 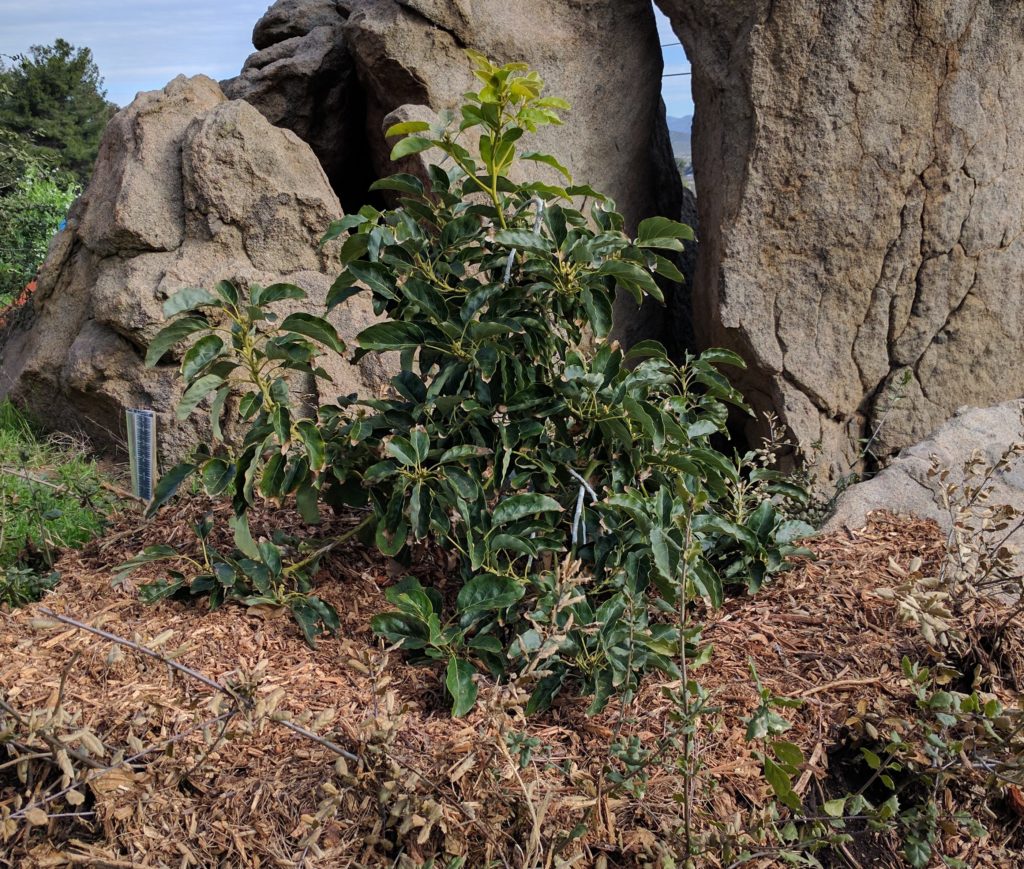 Sometimes I also get wood-chip mulch from Miramar Greenery, but often I get wood chips from a tree trimming service who is working in the neighborhood. It means they don’t have to pay to dump their load elsewhere, so it benefits both of us. I was lucky enough to get a load dumped last week, so I’ve been replenishing the mulch under my trees over the past few days. 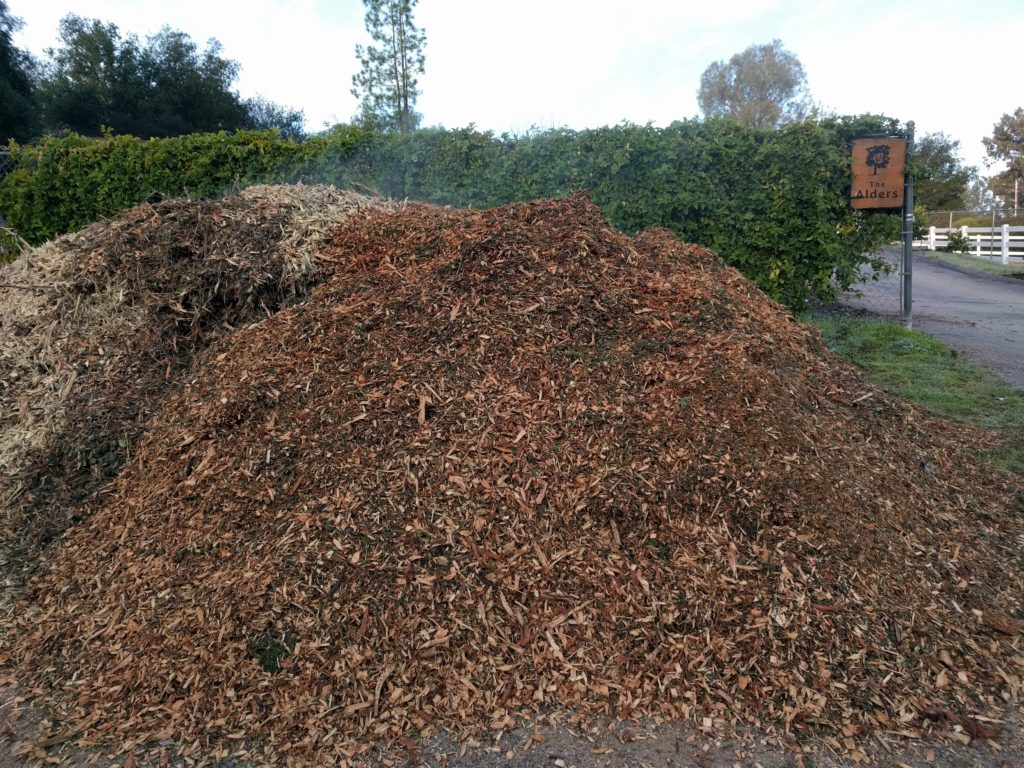 One steaming pile of wood chips.

(See my posts about using wood chips as mulch under vegetables and fruit trees. And my post about where to get wood chips.)

Is compost really enough for fertile soil in vegetable beds? As I said above, I eat the proof every day, but so do others. My friend Erik, for example, has added only compost on his vegetable garden for a number of years and his plants do as well or better than mine. And the British market gardener Charles Dowding certainly grows a heck of a lot of beautiful vegetables using only compost.

And are wood chips really enough for fertile soil under fruit trees? Again, the proof is in the pudding. I couldn’t imagine getting any more fruit out of my Valencia orange tree: 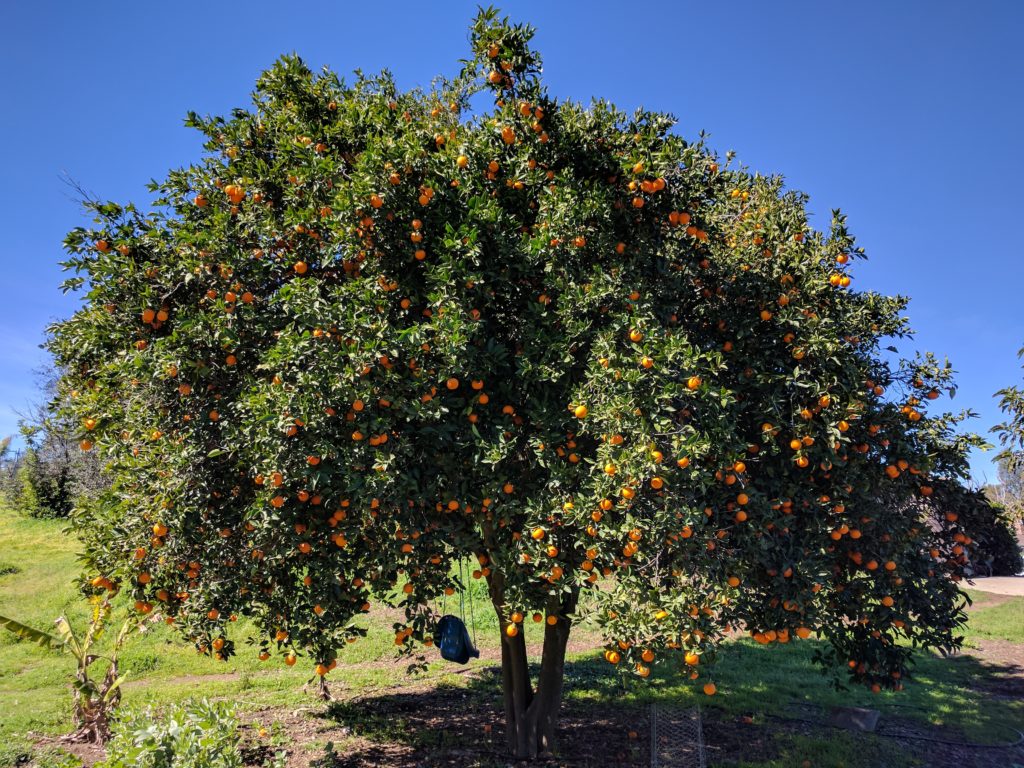 But it’s not just me. The other day I visited a friend who has an extensive orchard in her backyard. This woman is a certified arborist and a certified Master Gardener, she grows an astonishing variety of fruit trees — from Jan Boyce avocados to Honeyhart cherimoyas to SpiceZee nectaplums — and she puts nothing more than a thick layer of wood chips under them.

(Paul Gautschi follows a similar routine up in Washington, and Ruth Stout was doing something similar a hundred years ago.)

How is it that compost and wood chips do all of this work — creating and maintaining soil fertility without any additions of specially formulated fertilizers or constant tillage to loosen the soil? That is a question whose answer is book length. But here is a list of some specific effects that compost has on the soil, along with an attached bibliography for deeper reading.

And here is an excellent publication by Linda Chalker-Scott of Washington State University on the documented effects of using wood-chip mulch, which you’ll find are nearly the same as compost.

However it works, and however much we do or don’t understand it, the evidence is there. You can give your mind and your back some rest, and perhaps give your kids some fun with a shovel every now and then. For a simpler path toward soil fertility exists.

(listen to the Karl Hammer episode about compost)