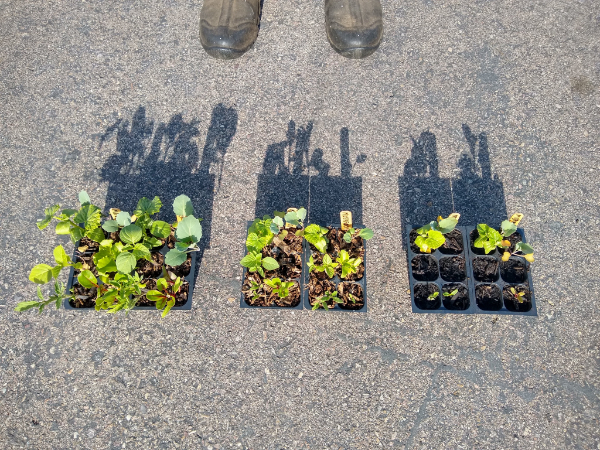 I start all of my vegetable seeds in homemade compost, as I wrote about last month. (“Can you start vegetable seeds in compost?”) The results are satisfactory. Still I wondered how my seeds would germinate and grow in other composts. Would different composts yield clearly different results?

Let me say right up front that neither of these other composts make any claim about being good to use as a medium in which to sow vegetable seeds. Furthermore, Miramar specifically states, “Planting directly into compost alone is not recommended.” Nevertheless, I was curious to see what would happen if I did.

The vegetable seeds I sowed grew well in my homemade compost, grew acceptably in the mushroom compost, and grew poorly in the Miramar compost. There were clear differences.

At sowing time I noted how each compost smelled, felt, and looked. I also kept in mind how each had been made.

Mine appeared to have the most diverse ingredients. In it I identified bits of leaves, twigs, soil, wood chips, and plenty of aggregates. It smelled neutral, a lot like dirt.

This is in spite of the fact that my compost comes from my mobile chicken pen, into which I continually dump kitchen and garden scraps, wood chips from my tree trimmings, occasionally some horse manure, and I also add some urine. The chickens scratch through everything and add their own manure. They do also incorporate some of the dirt from the ground below. It all breaks down slowly and without ever getting hot.

On the other hand, Miramar compost contains no manure and goes through a hot composting process. Here is what the Miramar website says: “At the Miramar Greenery, compost is made from yard trimmings and food scraps that have been ground, placed in windrows, turned and watered for 70 days. During this time, microorganisms digest the carbon and nitrogen rich mixture, causing the windrow to sustain temperatures of 140-165 F.”

Miramar compost was dark compared to mine, almost black. While I could pick out some small pieces of wood, it also had many fine particles that packed down densely into the module tray’s cells.

The mushroom compost had the most odor. It didn’t smell exactly like manure, but I couldn’t think of a better term to describe its smell even though it was more pleasant than an actual manure odor. The color was a pleasing dark brown. I could see many bits of straw, as well as some aggregates. It was the airiest, the fluffiest of the three composts.

The spent mushroom compost from Mountain Meadows Mushroom farm is made from the straw bedding and manure from the horse stalls at the Del Mar race track, plus gypsum, almond shells, cottonseed hulls, and alfalfa screenings, according to my notes taken during a talk that owner Roberto Ramirez gave recently. The materials are composted for about 20 days.

After the compost is used as a substrate for growing mushrooms, and some nutrients are removed from it during that process, the compost is “spent” and is made available to gardeners and farmers. I loaded my truck with some back in March.

What do you predict? How will the vegetable seeds come to life within each of these composts?

Here is what I saw:

On April 2, I made this note: “Miramar compost becomes hydrophobic, forming a black crust on the surface. Mine lets in water moderately fast. Mushroom lets in water immediately, fastest.”

At this point, the seedlings in my compost were at transplanting size so I considered the experiment done. Here is what they looked like from another angle on this final day:

From germination through growth up to transplant size, seeds sown in my homemade compost performed best. A higher proportion germinated, and growth was fastest and appeared healthiest.

The Miramar compost was not a friendly medium in which to germinate vegetable seeds. Only seven out of twelve cells had any germination — and I’d sown multiple seeds in each cell. The total germination rate was less than 50%.

Here are close-up photos of cucumbers and their roots in each of the composts when I stopped the experiment:

I don’t know for sure why each of these composts achieved different results for this particular task, but I’m going to bring up four points for consideration.

Maybe manure added to compost is helpful, as the two best performers both contained it.

Would the mushroom compost have performed as well as mine — or even better — had it not been partially depleted of nutrients through previously growing a mushroom crop?

Did the dense texture and lack of aggregates (clumps) in the Miramar compost inhibit germination of seedlings as it formed a crust on the surface?

And finally, were there any residues of pesticides and herbicides in the Miramar compost that were detrimental to the growth of these baby vegetables?

In the end, I now feel the need to do a second experiment comparing my compost to commercial composts formulated specifically for starting vegetables.