Can you start vegetable seeds in compost? 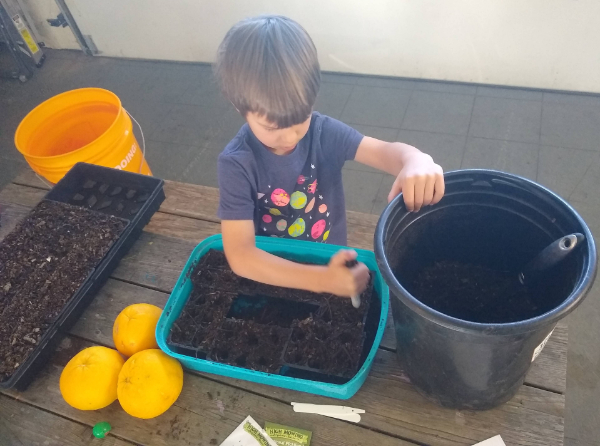 I’ve been starting my vegetable seeds in homemade compost for many years so when I hear someone say that this can’t be done, or shouldn’t be tried, I wonder about their reasons for saying so.

In addition to hearing individual gardeners recommend against starting vegetable seeds in compost, two books that I like both recommend starting seeds in mixes that do not include compost. Rather, the California Master Gardener Handbook and The Complete Guide to Saving Seeds by Robert and Cheryl Gough recommend starting vegetable seeds in mixes that are mostly composed of peat moss and perlite or vermiculite, which are the ingredients of typical bags of seed-starting mix that you buy at a garden center. (See, for example, E.B. Stone’s Seed-Starter Mix.)

I’ve used such seed-starting mixes, and I’ve gotten acceptable starts for my vegetable plants. However, a few years ago I ran a little experiment adding some soil and compost to the peat moss and perlite mix and found that, if anything, my vegetable seedlings ended up bigger and healthier at transplant size. (See my post, “Adding soil and compost to seed-starting mixes.”)

“It is very important to use sterile media,” says the California Master Gardener Handbook on page 96. And on page 72 of The Complete Guide to Saving Seeds: “Garden soil may also be used, but to prevent contamination of the seeds by soilborne fungi and other pathogenic organisms, be sure to sterilize it first . . .”

Compost, blooming with a diversity of microbes, is far from sterile — especially my homemade compost, which always has a bit of my yard’s soil in it and never heats up enough to kill much of anything.

Do my seedlings fall prey to diseases then? Am I being unwisely risky?

It used to be recommended to start vegetable seeds in compost

I feel outmoded, as most of the other gardeners or gardening books that I’m aware of who also use or recommend the use of compost in which to start vegetable seeds are old.

John Jeavons recommended that we start our vegetable seeds in a mix that is “one part sifted compost and one part bed soil.” This was on page 67 of Jeavons’s book How to Grow More Vegetables, first published in 1974.

And in the original Sunset Western Garden Book published in 1954, it is written on page 84: “Here’s the recipe for a standard compost, suitable for a wide range of seeds: 1 part loam [soil]; 1 part clean river sand; 1 part leaf mold or peat moss.” Leaf mold is compost made of decomposed leaves.

Both old sources recommend basically the same mix, which includes soil and compost. And both have little to nothing to say about sterility. Jeavons says nothing about it while the 1954 Sunset Western Garden Book says, “If you have reason to believe that the soil used in your seed compost may be harboring [fungus] spores or pests, or if you simply like to be on the safe side, you can sterilize the seed mixture.”

A common reason given for not using, or sterilizing, compost and soil in a seed-starting mix is to avoid the disease called damping off, which is said to be caused by several pathogens. The most common symptom of damping off is where a tiny vegetable seedling emerges only to have its stem shrivel just above ground level, after which the plant soon collapses and dies.

Once while giving a gardening presentation I mentioned that I use my homemade compost in which to grow vegetable seedlings. A woman in the audience asked me how I prevented damping off. “Let me think about that,” I said. “I haven’t seen damping off for a few years. I think it’s that I’ve learned to water the vegetable sowings properly.”

My routine when starting vegetable seeds in compost

My routine when starting vegetable seeds in compost does not consider the first two sides of the disease triangle, but it does eliminate the third side — friendly environmental conditions — and that is all that’s necessary.

But we are largely in control of these conditions. My routine is to thoroughly water the compost before sowing and then to almost never water the compost again after sowing seeds and before the seedlings have emerged. I keep my trays of seedlings in full shade, either in my garage or under the shade of a tree. Almost always, the compost maintains enough moisture to germinate the seeds without ever even a light misting.

In other words, I remove the possibility for damping off by not overwatering.

An additional key practice is to move the seedlings into full sun all day long immediately after germination. This is necessary for their continued growth (so they don’t become spindly), and it incidentally helps prevent damping off.

Once the seedlings are in full sun, then you can begin watering as the compost loses moisture from evaporation and from the seedling drawing it out.

This compost is not that compost

As all composts are different, and there may be some in which vegetable seedlings don’t grow very well, let me mention what mine is generally made of. It’s something I think of as “chicken compost” because it comes from my chicken pen, which is stationed directly over the natural ground in our yard, and which I cover with a bedding of wood chips (at least one foot deep at first). Then over time I add garden scraps, food waste, weeds, urine, and then the chickens add their manure. Sometimes I also add manure from a neighbor’s horses.