Reading my grandma’s 1961 Sunset Western Garden Book (My, how things have changed) 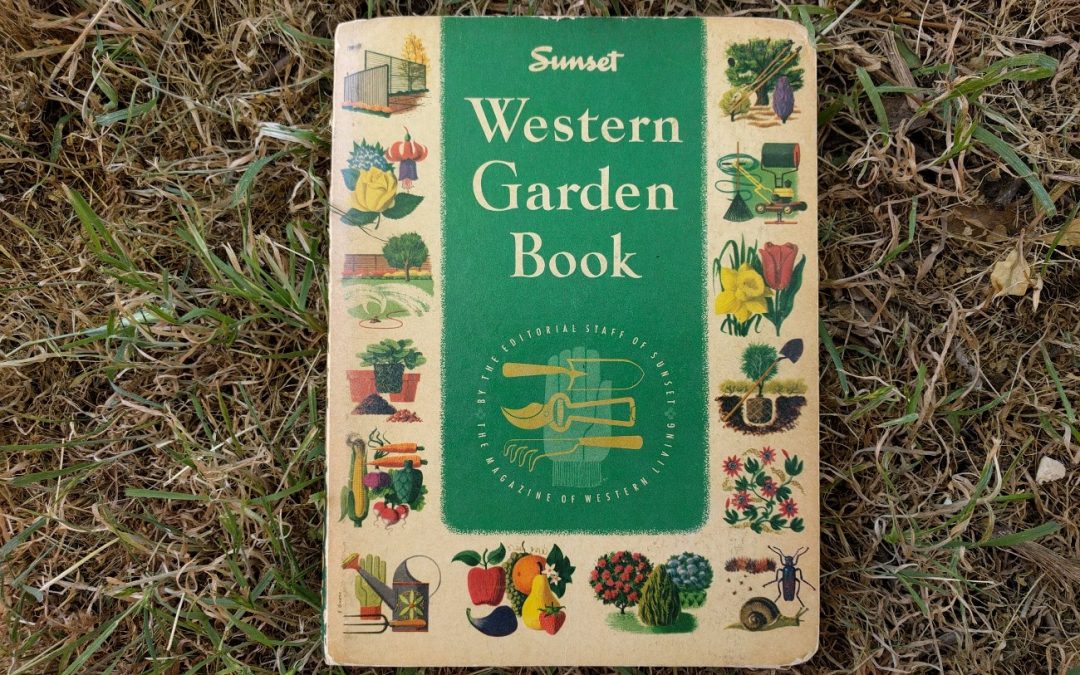 Last summer, I was touring my grandmother’s yard when we came to her peach tree and she assessed, “It’s in OK shape. But I didn’t get around to spraying it this year.” We moved on to her macadamia, tangelo, tangerine, avocado, grapefruit, and then down to her apple tree, her blueberries, tomatoes.

My grandma has always kept an abundant yard that I’ve been allowed to eat from ever since I have memories. She also keeps a well-stocked shelf of gardening books. I asked if I could borrow her 1961 edition of the Sunset Western Garden Book.

The bible made her do it

She has kept it in pristine condition, even through more than a half-century. Grandma has great respect for books. She once scolded me for creasing a book’s spine.

It was neat to read in this edition how the Sunset Western Garden Book came to be. In the first page of acknowledgements it says that the book is a collaboration of “thousand of authors,” those including “garden scientists, growers, nurserymen, and expert dirt gardeners.”

There were only 13 Sunset Zones (“subclimates”) described back then, and Southern California specifically had three, called Coastal, Inner Coastal, and Interior Valleys. The New Sunset Western Garden Book, published in 2012, divides the western U.S. into 24 Zones, plus a couple for Hawaii.

Later, I came to the chapter that gave me insight: Pests and Diseases. “You have to keep renewing the attack . . .” it said. “You can keep pest damage to a minimum only if you spray . . .” it continued. “Let’s face it. Most gardeners do not do a really thorough job of spraying.”

Spray with what? The “Pest Control Chart” was quite a list. It included recommended uses for DDT, Dieldrin, Malathion, Arsenates, Sevin, Chlordane, and many others.

Then in the chapter on Deciduous Fruits I came to a more specific section titled, “Spray Program.” It read, “Here’s a minimum spray program . . . spray each of your fruit trees thoroughly . . . use a three-way mixture of DDT, Malathion, and Captan.” And it concluded with this: “A diligent home fruit grower might apply 2 or 3 such follow-up sprays.”

Western gardeners came to refer to the Sunset Western Garden Book as the bible of gardening. It carried that much authority for decades. No wonder grandma felt guilty about neglecting to spray her peach tree. 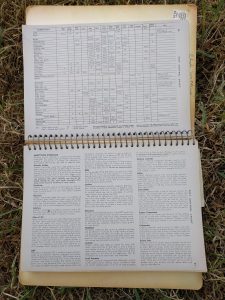 Pest Control Chart in 1954 edition of Sunset Western Garden Book (similar to one in 1961 edition).

I feel no such guilt. I wasn’t raised as a gardener during the spraying generations (my grandma’s and my mom’s), nor did I learn gardening while reading Sunset. Once, about seven years ago, I sprayed a lemon tree with neem oil just to see its effects. And I’ve never found a reason to spray a fruit tree since.

While the old Sunset’s spraying advice didn’t speak to me, the insight that it gave me into my grandmother and her generation of gardeners was so appealing that I sought out the even older, original 1954 edition.

My mother-in-law found me a copy and gave it to me for Christmas. Being winter, I built a fire in the fireplace and sidled up to the warmth and got lost in this wirebound, first edition of the Sunset Western Garden Book (shown in the photo at top).

The book had been owned by one Clyde Watkins, who had bought it for $2.95, and who had maintained his copy at least as pristinely as my grandmother. Sixty four years without a dog-eared page. Well done, Mr. Watkins.

My, how you and my grandma treated books differently, and my, how you guys were treated differently as gardeners.

The first chapter of the Original Sunset is a botany lesson called, “How Plants Grow.” In these six pages is related foundational knowledge that a gardener is unlikely to get far without. What functions do leaves serve? Why do plants make flowers? What is the cause of a transplant wilting?

On the contrary, I opened my New Sunset to find that it begins with twelve pages of photographs. Herein lies the main difference between the Original and the New that would recur every time I compared the two: the Original aimed to teach gardening whereas the New is pretty. Indeed, when I feel the need for some gardening inspiration, I think to open up the New Sunset. It is undeniably beautiful, and it is a pleasure to flip through. But the Original was written to be read, considered, inculcated, applied.

From the New, I receive inspiration; but from the Original, I receive education.

I looked for sections on starting vegetable seeds in both books. I found that the New Sunset provides a single page about that. And then the following section is about growing in containers, which includes many suggestions for color-plant combinations, such as a “bronze-caramel pot with Heuchera ‘Dolce Peach Melba.’”

The Original Sunset, however, dedicates eleven pages to starting seeds. Then the section that follows is titled, “Vegetative Propagation,” where one can learn to make new strawberry plants from runners, make new geraniums by using softwood cuttings, and make new blackberry plants by using root cuttings, and multiply fruit trees by grafting and budding. These propagation topics are almost entirely absent in the new book.

It’s as if the new book was produced under the editorial direction of landscape designers and graphic artists — a far departure from the original, which states explicitly that it was written by scientists, nurserymen, and expert dirt gardeners (a title you have to love).

This is acceptable and sensible. Many gardeners today purchase their landscape more than grow it. They don’t start vegetables from seed; they buy vegetable seedlings. Or even if they do start seeds, they don’t gather leaf mold and compose a potting mix; they buy a bag.

Except it’s not entirely acceptable and sensible. We can’t buy our way through the entire growing process. We continue to need to know some things about growing plants.

I may be exaggerating the amount of photographs and dearth of hard information in the New Sunset. It does touch on most important topics, and it remains one of the best guides to local gardening that we have. It’s just that I never realized how much deeper and better it could be until I read its 1954 and 1961 ancestors.

One of the sections of the 1954 edition that I can read over and over again is the 25 pages called, “Home Food Garden.” Not only does the depth of information reward a gardener who reads this section, but it could give pleasure to any reader through the elegance of its language.

One of many gems: “Beyond its economic and nutritional values, there’s a rare vitamin in the home harvest that feeds the spirit of the gardener who hauls it to the kitchen.”

This book was composed. People with broad experience took time to communicate it in clear yet artful prose.

Was this valued more back in 1954 compared to today? Were they more readers whereas we have become more watchers (TV, YouTube)?

Regardless, I wish that someone would write a 1954 Sunset Western Garden Book for 2018. It would have expert horticulture advice and wordsmithing; it would also have up-to-date recommendations on peach varieties, non-spray pest control methods, as well as irrigation technology and the like.

In the meantime, I wonder what I will say one day while giving my grandson a tour of my yard that catches his ear, that causes him to say, “My, how gardening has changed.”

Teaming with Microbes: a book review