Teaming with Microbes: a book review 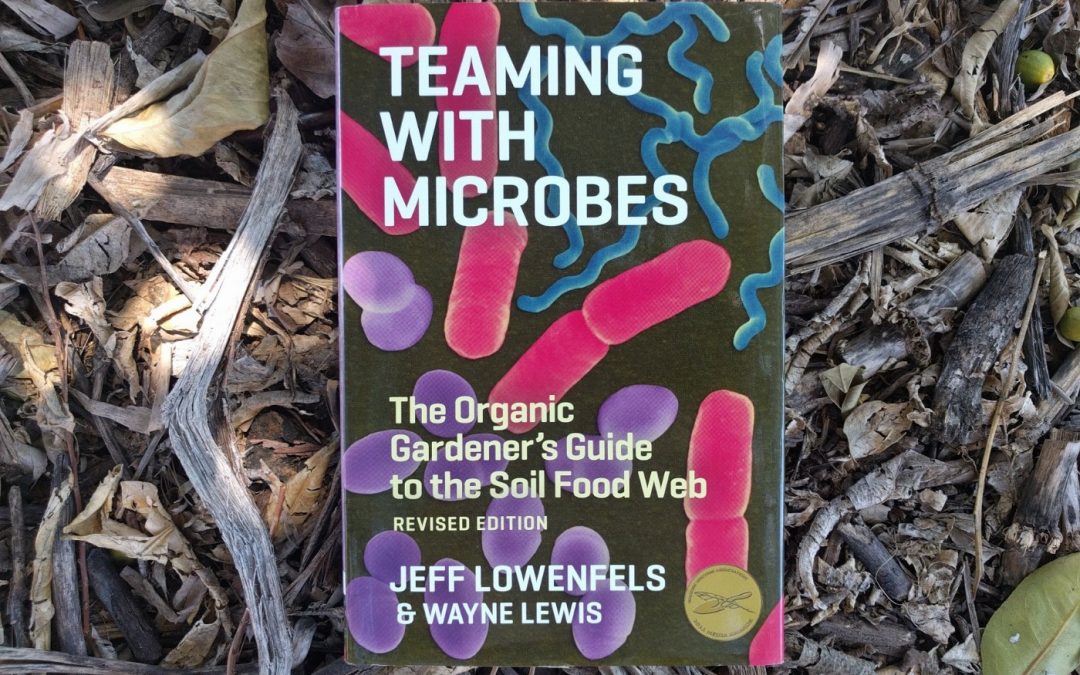 A good book changes you. If you looked at my vegetable garden today and compared it to my vegetable garden a couple years ago, one difference you’d notice is the fullness of its beds. Nowadays, I aim to keep plants growing over every square inch of each bed at all times, even if the plants are old and ragged. 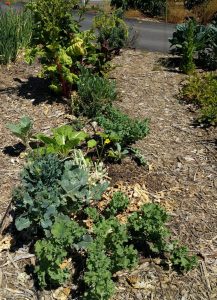 This is one of my vegetable beds here in late June, making its transition from winter plants (kale, beets, broccoli, chard, cauliflower) to summer plants (see the little yellow flower of the honeydew melon seedling?). Some of the winter plants are past their prime or have even gone to seed, but that’s okay; it’s their roots I’m keeping them for. Until the melon plants take over, I want living roots throughout the bed in order to feed the billions of tiny creatures that live there.

I learned from reading the book Teaming with Microbes that plants secrete chemicals out of their roots which feed the soil-dwelling bacteria and fungi. The microbes in turn do their own secreting of nutrients that plants need, right there next to the roots where the plant can take them in. So basically, the more life the better. More plants mean more microbes, and more microbes mean more healthy plants.

Technically, I had learned all of this before reading this book, but not in a way that changed how I gardened. Teaming with Microbes is filled with convincing photos produced by scanning electron microscopes, one of the most memorable being fungi attacking a nematode. The book is also personal in a way that a textbook never is; its explanations of the behaviors of the soil microbes are clear; and it goes beyond explanation to prescription. The second half of the book is entirely devoted to applying the information to improve your garden.

Teaming with Microbes was written by Jeff Lowenfels and Wayne Lewis, who first take the reader on a journey of character profiles small to large, from bacteria to earthworms, even up to lizards and birds. These organisms are not all “micro,” obviously, but they are all part of a network, the network of creatures that are found in your garden eating one another.

This is a network and not a merely linear food chain. A protozoan may eat bacteria, only to turn around and be eaten by a nematode; but also, protozoa eat fungi, and nematodes eat fungi. This network has come to be called the “soil food web.”

Who cares? As Lowenfels and Lewis tell it, the upshot is that if your garden’s soil food web is abundant and diverse, no single organism can dominate. There’s too much competition, and everyone is keeping one another in check. In practical terms, a “bad” organism — one that causes damage to your plants — will be somewhat controlled by other organisms who compete with it for food and space, and may even eat it.

Part 2 of Teaming with Microbes is about how to make your garden’s soil food web abundant and diverse such that it works toward the success of your plants. How to “team” with the microbes.

To this end, the book concludes with 19 “Soil Food Web Gardening Rules.”

Incidentally, I don’t find the rules and much of the rest of the book’s Part 2 as valuable as Part 1 and its explanation of the soil food web. Some of the rules are a bit tedious for my gardening style. For example, number 19: “Always mix endomycorrhizal fungi with the seeds of annuals and vegetables at planting time or apply them to roots at transplanting time.”

Others are easy to follow though: Avoid using synthetic fertilizers because they kill many microbes. Avoid rototilling since it severely damages the soil food web. (See my post, “Don’t dig in your garden.”)

I will never look at some dirt on my fingers the same. Imagine how many thousands of microbes I ingested when I took a bite of this carrot: 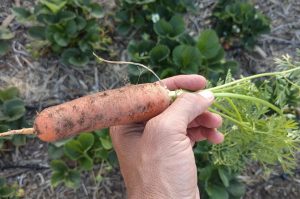 . . . even after I attempted to rinse off the dirt. 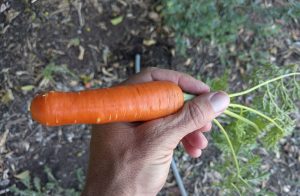 Good thing is, most microbes are good guys. And they help our gardens in more ways than plant nutrition and disease suppression. On page 23 we learn that microorganisms also “provide for the passage of air and water through the soil.” They do this by making glue and slime that bind soil into clumps and keep it cushy. It seems there is no downside to having the maximum amount and variety of life in the soil.

And so as I worked through Teaming with Microbes, I went to bed each night excited to wake up the next morning and do something to support the biology in my garden’s dirt. I’ll add more wood-chip mulch under the orange tree. The microbes will feed on it and decompose it. Better yet, I’ll add wood chips and plants under the orange tree. Give them more root exudates. More life, more life! 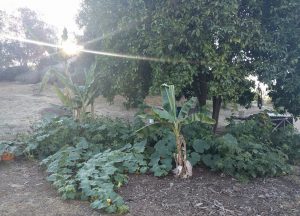 Listen to an interview with Jeff Lowenfels on the Permaculture Podcast.

Reading my Grandma’s 1961 Sunset Western Garden Book (My, how things have changed)