Don’t dig in your garden 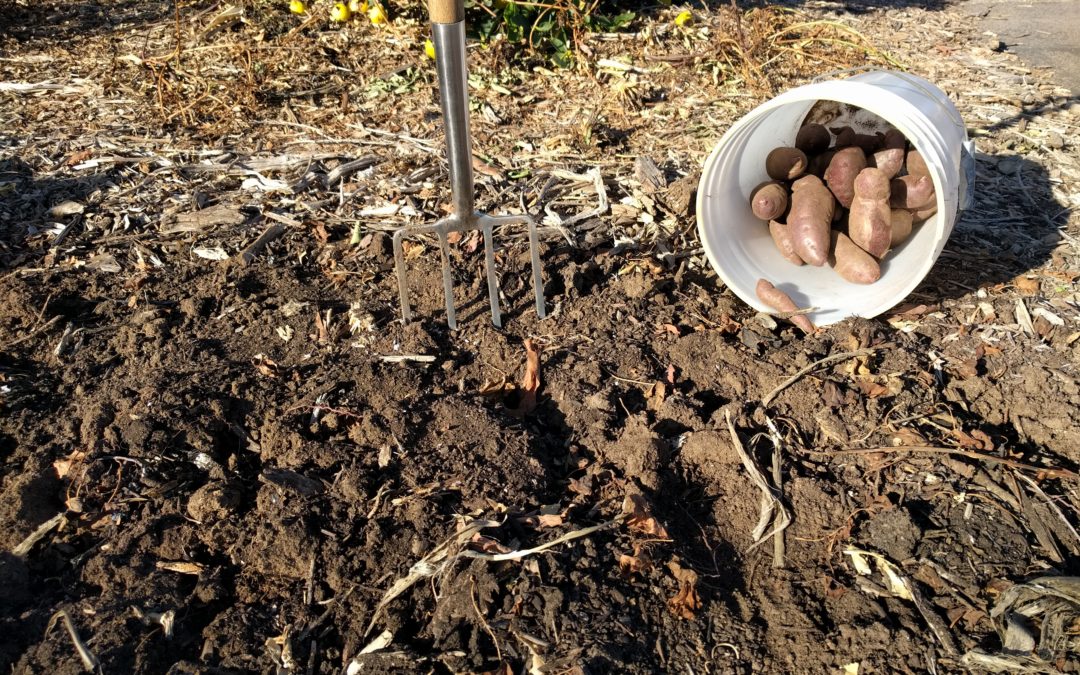 A light frost kissed my sweet potato foliage to death at the end of December, so I dug the tubers up. I don’t do much digging in my garden anymore, it occurred to me. In fact, I realized, besides harvesting sweet potatoes and Irish potatoes, I don’t dig at all. Do you? Why should we? And why shouldn’t we?

Many books and gardening authorities tell us that we need to “prepare” the soil for planting by digging in and loosening the soil. Crush all those clods. Fluff it up. If we don’t, especially root vegetables like carrots, beets, and sweet potatoes won’t grow well.

Evidence? I don’t see any evidence for the need to prepare soil in such a way in my yard. On the contrary,  look at the finely formed sweet potatoes in the bucket in the photo above. Or look at this one that grew too well in undisturbed soil under an avocado tree a couple years ago. 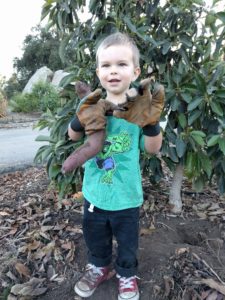 Part of the advice about “preparing” the soil also usually includes spreading compost over the vegetable bed and then digging it under so it’s at the level of future plant roots. This sounds reasonable, except for the implicit assumptions that plants only root several inches under the soil surface and that the compost nutrients stay wherever you apply them. Both assumptions are wrong.

Last winter I observed a great example of how variably plants can root. I had dumped a four-inch mound of compost beside some lettuce plants and neglected to spread it out. It rained consistently after that. A month or so later, I poked into the mound to spread it and so many white lettuce roots filled the mound that I couldn’t. In other words, the lettuce roots had come up above the level of the soil surface to feed on the mound of compost. I’ve seen similar root action from citrus trees, tomatoes, and other plants.

But even if roots only proliferated several inches down, there are billions of tiny creatures in every handful of soil whose entire existence is spent moving bits up and down and all around. Before July 15, when I planted the above sweet potatoes in this particular bed of my vegetable garden, I had grown ‘Jubilee’ corn there. I sowed the corn on March 8. Once the stalks were a couple feet tall, I spread a layer of compost a couple inches thick under them and all across the bed. End of job. No digging in.

I harvested the corn, then I planted sweet potato slips, then here I am today harvesting the sweet potatoes but there is only a skin of compost residue still visible on the soil surface. Where did it go? Worms and nematodes, bacteria and fungi, protozoa and pill bugs had spent months making use of that compost and moving it down below where most of them like to live — where they live in symbiosis with plant roots.

Digging is a waste of time

So my main reason for no longer digging in my vegetable garden is that I’ve found it to be a waste of time. I learned to garden the conventional way — by fluffing up the dirt and incorporating fertilizer or manure or compost — but at some point I started to wonder if it were necessary. Who is fluffing up the dirt and digging in fertilizer in a forest? Have I ever tried not digging? What’s the worst that could happen?

Then I moved to a new house, where I live now. This was in July 2013, about four-and-a-half years ago. I decided to locate my vegetable garden in the long-abandoned front yard where only sparse weeds grew over hot, bare dirt. And I decided to never dig it, but just plant right into the terrible looking stuff and mulch and compost on top. Let’s see how it goes.

My vegetables grew and produced acceptably that first summer, and they’ve gotten better each year since. I’ve still never dug the dirt. I’ve seen no need.

My wife and kids were near me in the yard picking and eating peas while I was unearthing those sweet potatoes. I pulled back on the fork and the soil didn’t spread like sand, but it cleaved into clumps. It didn’t use to do this. My soil is a sandy loam, and in another part of the yard where I let my boys treat it like a sandbox for their construction projects it has all of the clumping qualities of, well, sand. In other words, it doesn’t clump at all, and that’s not good. 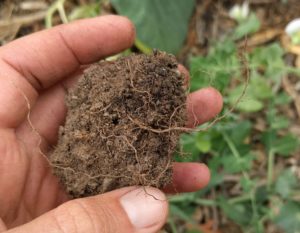 I held up a small clod of my vegetable bed soil and beamed to my wife, “This soil is getting really good. It holds together so much better than when we first moved in. There were no worms around. Here’s a worm!”

But my son Miles came running, ” I want to see the worm!”

The more life and the more diversity of life in the soil the better, say soil scientists. And this is encouraged by, among other things, minimal digging, plowing, tilling, cultivating. Why is an abundance of life in the soil good? Those tiny creatures create clumps for one, or what soil scientists call aggregates or peds. Such aggregation goes hand in hand with the other benefits that the soil biology brings, so let me just list some:

Read more in this presentation called “Tillage effects on soil properties” done by a soil scientist at the University of Wisconsin.

In my sweet potato patch, the killing of the foliage by that frost had revealed two weeds. That’s two weeds that had grown during the entire span of July through December: six months. When I started growing vegetables here, however, the weeds were many many more.

I did two things to get to this nearly weed-free garden. First, I covered the surface of the soil with compost or a mulch of leaves or wood chips (ground up tree trimmings). If you don’t cover the soil, it will cover itself, with weeds. 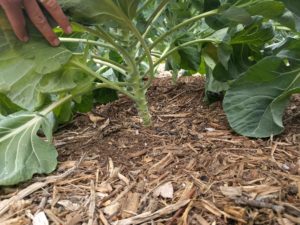 Second, I removed weeds before they formed seeds. “One gone to seed means a decade of weeds,” so it is said. And for perennial weeds like Bermuda grass, I put in the work to uproot them all.

And then there is a third thing, the thing pertinent to this topic, but it is a thing I have not done, and that is dig. Weed seeds will only germinate if they are within about a half-inch of the surface of the soil. So while your garden is growing, those weed seeds germinate and grow and you pull them before they set new seed. If you then do not disturb the soil, you’ll have only a few future weeds whose seeds have blown into the area. But if you dig . . .

Digging brings to the surface seeds that had been too deep to germinate previously. (They probably only got deep in the first place because they were dug under. Seeds don’t normally bury themselves a foot underground where they have no hope at life.) Now they have a chance at life, and a chance to set more seeds to add to the seed “bank” of innumerable seeds throughout your soil profile. Digging can create a vicious and interminable cycle of weeding work. 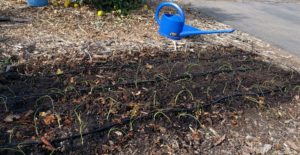 The day after harvesting sweet potatoes, I planted onions in that bed — bed number eight, I call it. Even though I was careful not to turn the soil over as I forked up the sweet potatoes, some of that was inevitable and I bet I gave some dormant weed seeds a chance at life. I bet I get more than two weeds in bed number eight over the next six months. Oh well. Sometimes you can’t avoid a little digging.

It’s a new year. How about a new gardening adventure? If digging is part of your routine, give not digging a shot.

Others who don’t dig

Maybe you think you have to dig because your soil is clay instead of my sandy stuff. I know of people who get great results from undug gardens in clay soil too. There are even some that you can view and hear about through videos. Try this video of Paul Gautschi who gardens in clay that he doesn’t dig in Washington state.

Or maybe you wonder if a garden whose soil hasn’t been “prepared” through digging will yield as much. I haven’t done side-by-side trials myself, but a guy named Charles Dowding has been running such an experiment for years. In summary, his undug vegetable beds yield as much or more. Dowding shows and talks about this experiment in this video. He also writes about his experiences digging and not digging in his books, for example, one called “Gardening Myths and Misconceptions”.