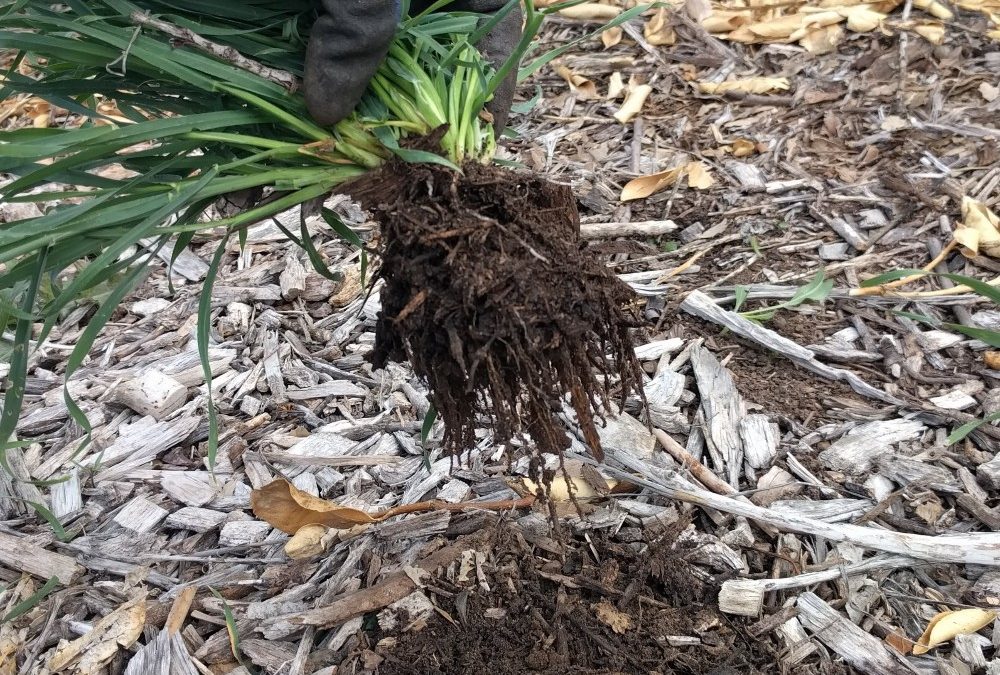 Weeding the garden is not mindless work. This struck me the other day when my wife was helping in the garden and I saw her do what we all instinctively do to a weed: rip it out of the ground. That’s generally a fine thing to do with a small weed, but this was a big weed like in the photo above.

What then? The upturning of the soil just brought dormant weed seeds near the surface and gave them a chance at life, and so the effectiveness of the mulch in that spot has been negated. In essence, future weeds have been created.

Beyond that, the big roots could’ve been left in the soil to decompose, which benefits the soil by feeding the tiny organisms that live there (those organisms will make nutrients available to future plants), and by improving the soil’s texture and water-holding capacity through the additional organic matter.

(See my post “Don’t dig in your garden” for more on why it’s good to leave your garden dirt undug.)

How to leave the roots be while still eliminating the weed? Chop it off below the waist, so to speak. Cut the plant just below the stem or leaf parts and just into the top of the roots, like this: 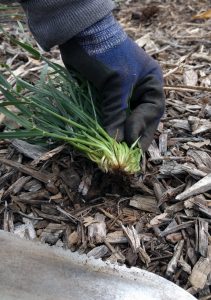 Gather up the leaves and cut with a tool like a hori-hori knife. 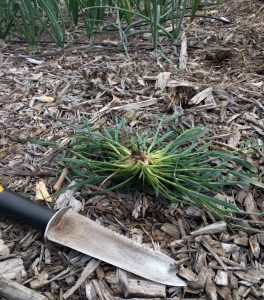 You can use many tools to do the cutting (pruners, pocket knife, etc.), and this technique works especially well on thistle and cheeseweed too. However, be aware that it doesn’t work on every weed. A few weeds will regrow from underground parts. Bermuda grass is an example. It has parts underground (rhizomes) that are attached to even deeper roots which all must be entirely dug up. This is best done by moistening the soil and then using a garden fork.

As I thought about smart weeding, three other approaches came to mind, one being the removal of weed seeds. If a weed has formed seeds, then take them away. Put the seeds or the whole weed in the trash, in another part of the yard where you don’t care about weeds, maybe compost them, whatever. But if left, you will have hundreds maybe thousands of the weed’s progeny next year. You see the little guy in this photo?

It is said that a single pigweed plant such as that one can produce 250,000 seeds. That one little guy — 250,000 seeds! I will pull it before it forms seeds. But if it escapes my notice like the grass type of weed below, then I’ve got to be careful about getting its seeds out of the area, not letting them fall on the ground: 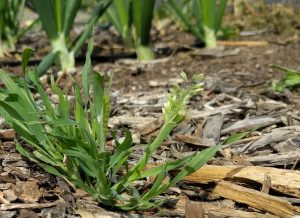 Dirt hates to be naked. If you don’t cover it with the plants of your choosing, then nature will cover it with whatever blows in: weeds. But if you clothe the dirt preemptively, then fewer weeds can get a roothold, and those that do are easy to see and easy to uproot (or cut below the waist).

Below my fruit trees I keep a mulch of wood chips. Below my vegetables I keep wood chips or sometimes compost. I still get some weeds among my vegetables, of course, but the mulch definitely suppresses them, I’ve observed.

Don’t believe that a mulch of wood chips “robs the soil of nitrogen,” as is claimed in many otherwise excellent gardening books, including Pests of the Garden and Small Farm by Mary Louise Flint. The proof — or anti-proof, as it were — is in the pudding. 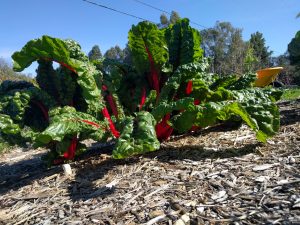 Plenty of wood chips under these chard plants, but do they look like they’re struggling?

If you’re planting vegetables in a new area of ground, you’ll thank yourself a million times in the future if you first use the stale seedbed technique. It’s as simple as this: After clearing the ground of weeds, water the area with at least a half inch. (You can use a tuna can to measure that.) Wait one to two weeks for weeds to emerge, then pull them or hoe them shallowly. Weed seeds only grow if they’re in the top inch or so of soil.

Now sow or plant without disturbing the soil more than necessary. Or if you really want to make the seedbed “stale,” then repeat the process one more time before sowing or planting. Few weed seeds will later germinate as your vegetables grow. 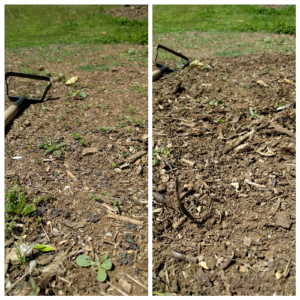 (For more on this technique, see this nice graphic titled, “Stale Seedbed Preparation,” by Steve Fennimore of UC Davis.)

Stale seedbedding is particularly useful to do before you sow seeds of plants like carrots or onions since you sow them close together and the plants are delicate. Trying to hoe or pull weeds among onion or carrot seedlings is tedious to say the least. I sowed onion seeds directly in the ground without using the stale seedbed technique once, and I will never do it again.

Spring time in Southern California is boom time for weeds, as winter weeds like grasses and cheeseweed are setting seed at the same time that summer weeds like purslane and spurge emerge. So right now, let’s use our gray matter along with our back muscle to ensure that next spring will require less of both. 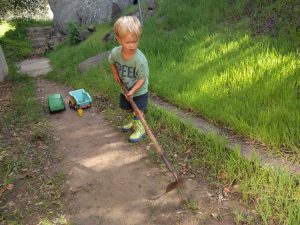 Oh, the mistakes I’ve made: Planting vegetables at the wrong time