Don’t cut off the fruiting wood: Pruning lesson number one 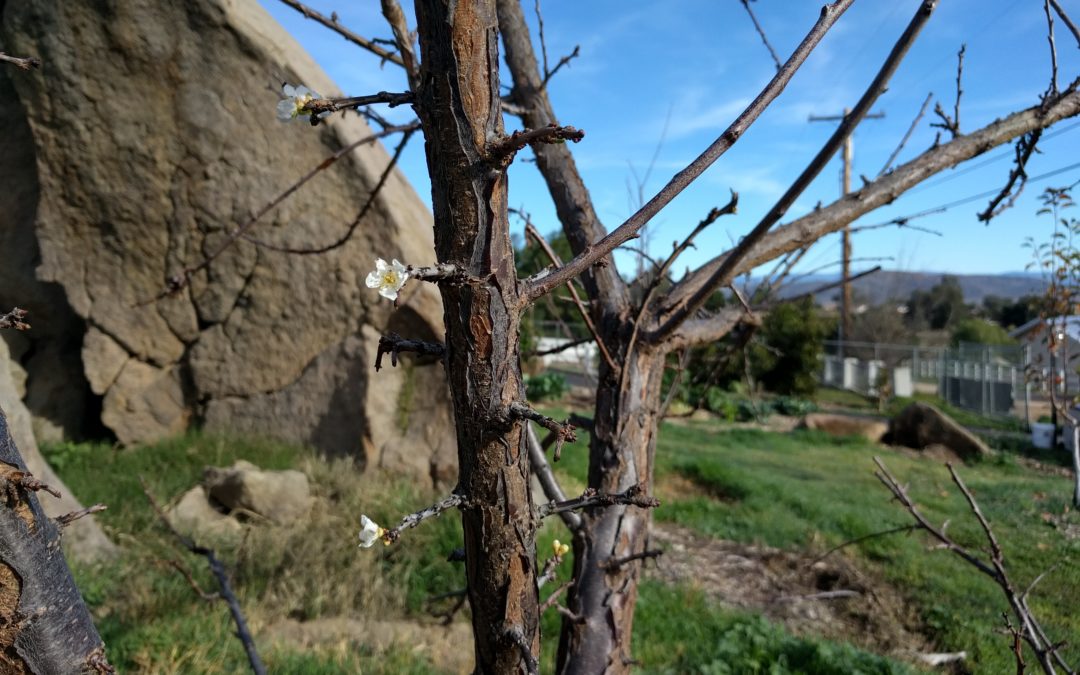 The first time I pruned a plum tree, I climbed into it and started snipping off stubby branches that looked good for nothing. They were kind of in my way too, snagging on my shirt. Hmm, the plum tree didn’t flower much that year. It set only six plums in total. Pruning lesson number one, learned the hard way: Don’t cut off your fruiting wood. Fruit trees don’t just grow their fruit anywhere and everywhere, you know? Go out and have a look at your trees. Here in early March is a perfect time to get to know their habits, as they’re all flowering or about to start, and they all flower in slightly different places. Are the flowers at the tips of branches or are they along the sides? Are they on long or short branches? Are they on old, thick branches or young, thin branches? Plums, Apricots, and Pluots As I learned the hard way, plums flower mostly on stubby branches that you might be inclined to cut off. It so happens that apricots flower in a similar style — on “spurs,” the stubby branches are called. 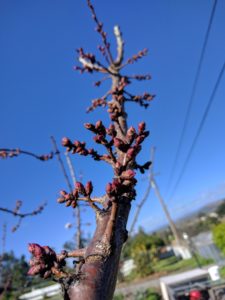 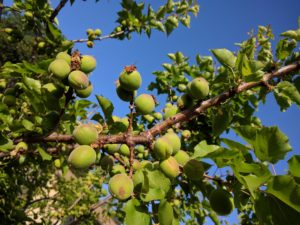 Same tree a month or so later (last year). Notice that most of the apricots are growing on spurs, not along the sides of long branches. 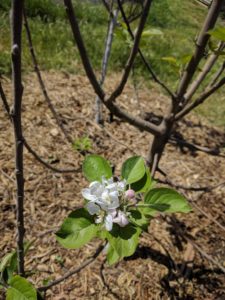 And here are flowers at the tip of a long branch on a Fan-stil pear: 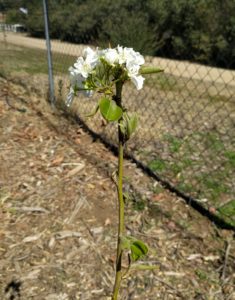 So then, the mistakes you’d want to avoid while pruning apples and pears would be cutting off spurs as well as cutting off the tips of branches. Peaches and Nectarines Finally, we come to peaches and nectarines. Take a look at this Red Baron peach in full bloom last March: 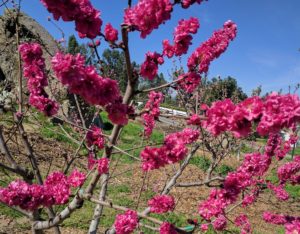 See how it’s got flowers all along the sides of long, skinny branches? Peaches and nectarines don’t make spurs. They flower almost entirely on long, skinny branches that grew the summer before. These branches have bark that is red and green. Here is an example of a branch with red bark (whose underside is green): 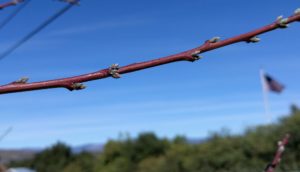 Here is another branch on the same tree (Snow Queen nectarine). It will produce little to no flowers because it’s old. Note the gray color of its bark: 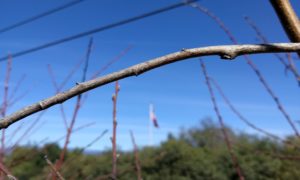 Don’t be deceived by the thickness of a peach or nectarine branch: sometimes a younger branch is thicker than an older one. The color of the bark tells the age, which tells you how much it’s likely to flower and fruit. Red with a green underside means it’s got that potential, so don’t cut it all off. This isn’t to say that you shouldn’t cut off any fruiting wood. Pruning always entails removing some fruiting wood. We should just be aware of when we’re cutting off fruiting wood by noticing where our trees flower. Check out your citrus, avocados, pomegranates, cherries, and whatever else you have too. Take advantage of this dynamic moment in the year to gain a more intimate understanding of where your trees grow their delicious fruit. And when it’s time to prune next, you won’t unwittingly chop off those ugly little branches that snag on your shirt. I never did it again. At least I learned my lesson. You might also like to read my other posts about pruning deciduous fruit trees: My best advice on pruning deciduous fruit trees: Keep them small Where to cut a branch on a deciduous fruit tree Pinch to shape young fruit trees Summer pruning deciduous fruit trees Think about sunshine when pruning deciduous fruit trees Should you prune a bare-root fruit tree? And you might also like to read: Pruning avocado trees When and how to prune citrus trees