The Lamb/Hass avocado tree: a profile 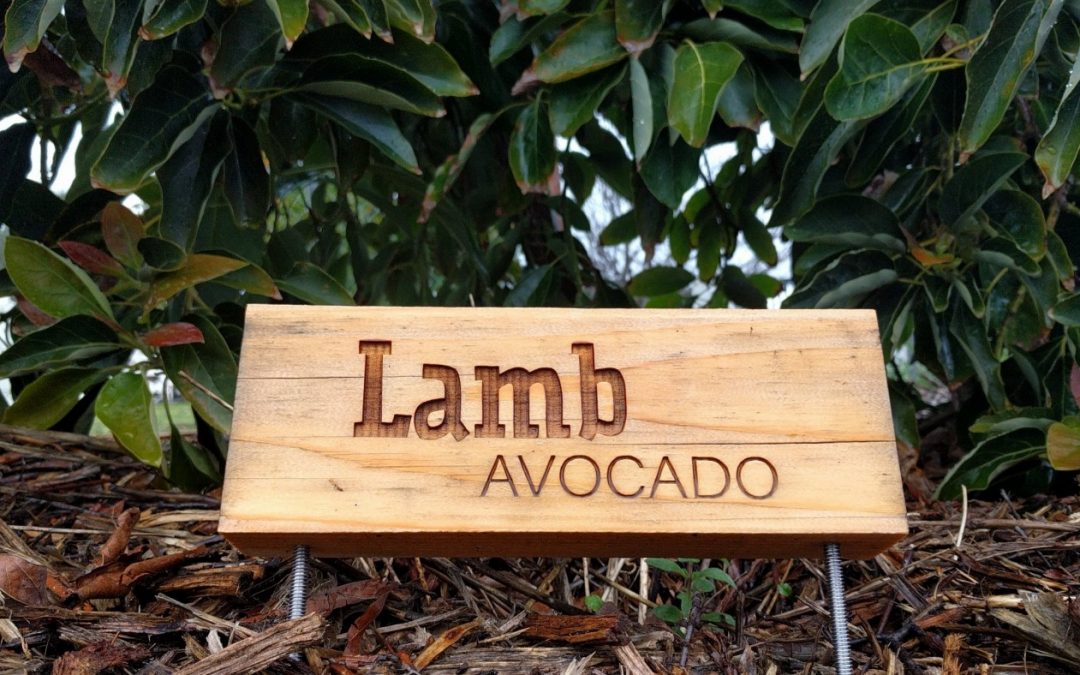 In 2013, I planted a Lamb/Hass avocado tree because its fruit was said to be ready for harvest in summer. I didn’t know much else about the variety, and I’d never tasted its fruit (knowingly).

During the past five or six years I’ve learned a lot more about Lamb — both from my tree and from other Lambs I’ve seen and eaten from. I share this with you so you can be more informed than I when deciding whether Lamb is a good fit for your yard and avocado needs.

The most important consideration is how the fruit eats. Lamb makes for very good eating.

On the tree, the Lamb fruit has green skin until it’s mature, usually around May, when the skin turns black. It has a pear shape, often with a more blocky top than other avocados, such as Hass.

Cutting the fruit open, you find that the peel is a bit thicker and less pliable than Hass so it doesn’t peel as well. I use a spoon to scoop out my Lamb avocados.

But the color of the flesh is optimal, with a rich yellow in the center fading to green toward the peel. The texture is firm and without significant strings.

The seed is medium-small in size: not tiny like a Pinkerton, nor large like a Bacon. There is plenty of avocado to eat in there.

To me, the taste is very good. But taste being subjective, what do others think about Lamb? I’ve heard other people who are very experienced with avocado varieties say Lamb is “good,” “great,” “a really wonderful fruit,” and “equal to Hass.” I personally rate it slightly below Hass though.

Here is a video profile I made of the Lamb avocado fruit:

Lamb comes from the University of California’s avocado breeding program and was patented in 1996. That patent is now expired, but it makes for interesting reading. Here is a link to the patent.

In the patent, Lamb is called ‘Lamb/Hass,’ but these days people often write it ‘Lamb Hass,’ and many shorten it to just ‘Lamb.’

This makes sense because Lamb is not a Hass, not even half a Hass. Lamb is, according to the patent, an open-pollinated Gwen seedling, meaning that Gwen was its mother and its father is unknown. Gwen was a seedling of Thille, and finally, Thille was a seedling of Hass. So it can be said that Lamb is a great-grandchild of Hass, a very distant relation.

That being said, Lamb fruit can be found on the avocado shelf at the grocery store labeled as Hass, or sometimes called Jumbo Hass. You may have bought Lamb avocados thinking they were Hass; it’s very hard to distinguish the two. I bet I ate Lamb fruit from the grocery store unknowingly before I ever ate them from my tree.

The seed for Lamb was planted on the ranch of Bob Lamb in Camarillo, hence the name. It was one of tens of thousands of seeds planted under the avocado breeding program under the direction of Bob Bergh of U.C. Riverside.

(Read a narrative of the variety’s development as told by Bob Lamb’s son, John.)

Bergh chose to patent the Lamb seedling for many reasons, one of which was the tree’s slender, upright growing shape.

Lamb trees will spread wider than ten feet, but they can be kept to within ten feet easily through yearly pruning.

Many people, including myself, appreciate Lamb’s slender growth habit because it allows for growing more trees in a given space.

Another thing I like about Lamb is its tolerance to our irrigation water in Southern California. We have high chlorides, which some other avocado varieties have trouble with. Hass doesn’t tolerate these chlorides well. But Lamb doesn’t much mind, and that means that a Lamb tree will look better in the fall and winter because it will have less brown tips.

(See my post, “Avocado leaves turning brown? Here’s why and what to do.”)

In terms of heat and cold, I’ve found Lamb to also be possibly tougher than Hass. In the extreme heat of July 2018, when my yard peaked at 117 degrees, my Hass lost all of its fruit while my Lamb retained much of its crop. Both trees had similarly sized fruit and were irrigated the same. During cold winter nights, my Hass has always experienced a bit more damage than my Lamb.

But I make no hard conclusions based on my single trees in a single location. I have heard others say they find no difference between the heat and cold tolerance of Hass versus Lamb.

Lamb fruits a lot and it fruits early, and I’ve never seen nor heard of a Lamb tree that is unsatisfactory in its bearing habit, in terms of its overall productivity. My tree in particular set its first crop in its second spring after planting, then providing six fruit to eat at harvest in 2016 (its third year in the ground). The tree was planted from a five-gallon container. In it’s fourth year, it set 68 avocados.

Alas, in the tree’s fifth year it barely flowered and set nothing. I’ve seen a few other Lamb trees in backyard settings alternate bear like this. And I’ve talked to some avocado farmers who experience this with Lamb as well.

On the other hand, one way in which Lamb is certainly superior to Hass and many other varieties is that it sets its fruit on the interior of the canopy, protected by many leaves. The fruit ends up with no sunburn and good cold protection as well.

In addition, Lamb has the habit of producing much of its fruit in clusters. Often you’ll find a dozen avocados hanging next to one another.

Lamb avocados need to grow for a year to a year and a half before they’re ready for harvest. In other words, if the tree flowers in April, then the very earliest that the fruit will be ready to pick is the following April or May, but it will taste better if left until sometime in the summer. This is a longer maturation time than some other varieties, such as Fuerte or Hass. And it can be confusing because the fruit looks big and ready to pick even in the winter. Yet, similar to varieties such as Reed or Holiday, it must be left on the tree long after it is up to size in order for the flavor to develop. An easy way to tell when Lamb fruit is ready to pick is by skin color: if it’s black it’s ready.

One unfortunate drawback to this later harvest season is that if you want to prune the tree, you don’t have a convenient window of time to do so. No matter when you prune, you sacrifice fruit.

In a pruning trial done in Valley Center by Gary Bender of the University of California comparing Lamb and Hass, it was Hass that outperformed Lamb in part because of this dilemma. (See a summary of the trial results here.)

Another unfortunate aspect to Lamb’s later harvest season is related to its juvenile habit of shedding fruit as the weather warms in spring. You’ll have a young Lamb tree with a crop of twenty avocados, and then in March as the tree begins to flower it also drops fruit. Not all drop, but some do, and it’s disheartening. Take heart: the tree does this less as it ages and it hurts less because the bigger tree carries a lot more fruit.

Summarizing the harvest season for Lamb, it starts around May in southern Southern California and starts a couple months later up near San Luis Obispo. I’m in inland San Diego County, and my Lamb fruits have tasted good as early as May.

Lamb has great hang time, as they say. So the harvest season doesn’t end until sometime in fall for me. September fruit still taste great from my tree. In comparison, Lamb hangs a couple months longer than Hass in my yard, and even longer than Reed. I’ve heard of people in locations with milder summer temperatures or farther north holding their Lamb fruit almost until Christmas. But personally, I consider the prime Lamb season as June through the end of September in my yard.

Is Lamb a fit for your yard?

(See my posts “Can I grow an avocado tree in a small yard?” and “What is the best kind of avocado to grow?”)

But if you don’t want to do much pruning, you could plant a Lamb and it would stay naturally smaller.

Lamb could also serve as a companion tree to Hass. The harvest seasons are different enough (Hass being earlier) that the two trees could provide delicious avocados for most months of the year. While true that both trees are A-flower types, and therefore don’t offer maximum cross-pollination opportunities, I wouldn’t pay that any mind. My Lamb has fruited well without a B-type anywhere nearby (as has my Hass), and this “self-fruitful” bearing habit has also been observed by many others.

I made a five-minute video about the Lamb/Hass avocado tree. It’s a summary of the above post, but with amazing — amazing! — motion and audio: