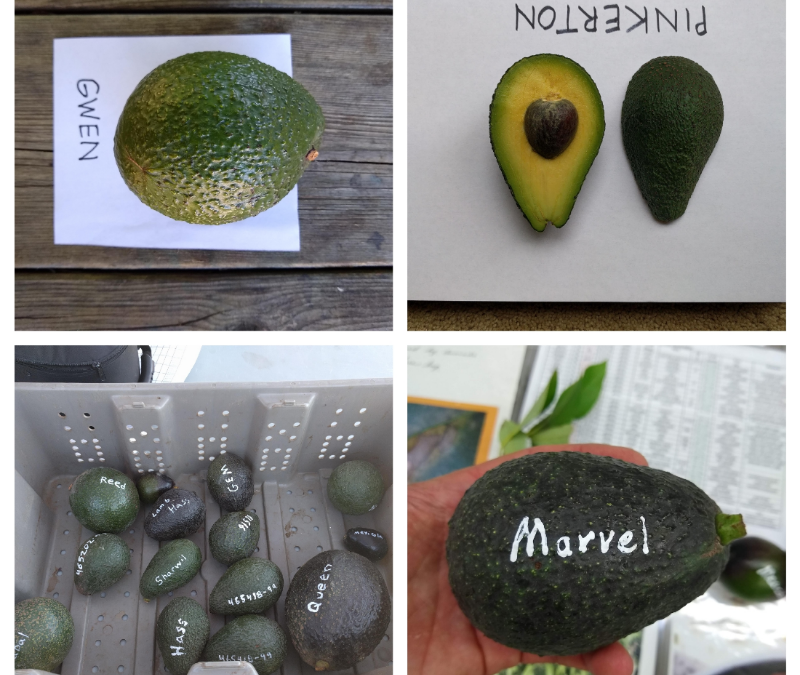 Before I had my own avocado trees, I picked fruit from the trees of others (and usually I asked first). I had learned the locations of trees of different varieties and in which season each tasted good so that I could find avocados to eat all year.

Later, I asked avocado farmers why we consumers could only get poor-quality Hass avocados from Chile or Mexico in stores in Southern California during the winter. I was eating delicious Bacon and Fuerte avocados from local trees at this same time. Their answers related to marketing and handling efficiencies and sounded convoluted and disingenuous.

The point now is, before I started planting my own avocado trees I knew that it was possible to get a year-round harvest. Local avocado farmers simply weren’t giving it to us. Since then I have discovered the challenges involved in actually achieving this year-round harvest in a single yard. Choosing the right varieties is only one of the challenges. And I hope that by writing this post I can help you overcome those challenges and live the dream of being able to pick excellent avocados from trees in your own yard every day of the year.

Choosing the right varieties is where the quest for year-round avocados must begin. Luckily, California avocado growers and researchers have considered this topic for a hundred years, and the varietal recommendations of some are still worth mentioning today.

Frank Koch wrote on page 50 of his Avocado Grower’s Handbook, published in 1983, that a mix of Hass, Reed, and Pinkerton would permit harvest year-round. Pinkerton was a new variety in 1983.

Five years later, Gray Martin and Bob Bergh of U.C. Riverside, also suggested Hass, Reed, and Pinkerton, but they added the recently released Gwen variety as an alternative to the Hass.

The seasons of these varieties are roughly winter into spring for Pinkerton; spring into summer for Hass and Gwen, and summer into fall for Reed.

But what about for the late fall and winter? “We don’t really have anything for November-December,” Arpaia said. “Fuerte is good in December and January, if you want to take a gamble.”

As I have written about before, there is often a window of time that occurs as early as September or as late as December in most of Southern California, depending on the weather, where good avocados are in short supply. This gap, which I have come to think of as The Fall Gap, comes after the late varieties like Reed and Lamb are finished but before the early varieties like Pinkerton and Fuerte are up to par.

It’s not that there are no avocado varieties that fill this gap. Mexicola, Mexicola Grande, and Stewart are two varieties which mature around this time and whose taste I enjoy. The problem is that they are not all-around as good as the varieties recommended above, in my opinion. In short, Mexicola is thin-skinned and very small, and Mexicola Grande and Stewart are also thin-skinned, have a short harvest season, and are occasionally stringy. The thin skin of these varieties makes the fruit prone to cracking and to chewing by animals. They are not bad varieties, that’s for sure; I just don’t think they’re on the same level as the others.

Best varieties for each season

So here is a list of the varieties that have been recommended above for each season, and with which I agree:

(Here are my profiles of the Reed and Lamb and Fuerte avocado trees.)

Other varieties for each season

Still, we know that there are many other good varieties of avocados beyond those listed above, such as:

Spring — Jan Boyce, Sharwil (both varieties being ready to harvest as early as late winter)

The list could go on much longer, but I’ll leave it at that because these varieties are ones that I have enough personal experience with to say that they’re worth growing even though they wouldn’t be my first choices in their respective seasons.

A or B flower type?

The characteristics that I most desire in an avocado variety growing in my yard include eating quality of the fruit, productivity of the tree, and the length of the harvest season. All of the varieties in the “best” list taste excellent, have a long harvest season, and are highly productive — with one exception: Fuerte.

Remember what Mary Lu Arpaia said? “Fuerte is good in December and January, if you want to take a gamble.” The main gamble in Fuerte is its unpredictable fruitfulness. In part, this is related to its being a B-flower type. Avocado varieties are of two flower types — A or B — and it has been observed in California since almost the beginning that A-type varieties fruit more reliably overall. (See more on this from a paper by Peter A. Peterson.)

Jan Boyce is an A-type avocado variety, but Sir-Prize, Bacon, Sharwil, and Nabal are Bs. These Bs can produce well; I’ve seen loaded trees of all of these varieties.

However, because of the behavior of B-type varieties, their fruitset is more influenced by the weather and whether they’ll produce well in your yard is less predictable. In my yard, as one example, A types outproduce B types on average. One probably exists, but I’ve never seen a yard with multiple varieties of avocados where the story is different. So I’d choose an A type over a B type, all other things being equal.

I wrote a post a few years ago titled, “What’s the best kind of avocado to grow?” There I chose, in order, Hass, Reed, and Fuerte. But I’m here tempted to prefer Pinkerton over Fuerte for the winter window solely based on productivity. Fuerte tastes better, to me, but Pinkerton produces more. Such a trade-off! I’ll leave the choice up to you. (And I’ll keep both trees in my own yard, if that’s okay.)

So can you choose one variety per season and expect to get a year-round harvest? Realistically, probably not, not in sufficient quantity year in and year out. Individual avocado trees have more or less fruit each year, and sometimes the fluctuation is so extreme that a tree will be barren for a year.

Therefore, if you really want to ensure that there are great avocados to be picked from your yard all year long, every year, you ought to have two trees for each season, and ideally the two trees would be different varieties. Most likely, even if one is having an “off” year, the other will have some fruit on it.

Two varieties for each season would make for six trees total if you weren’t adding fall varieties like Mexicola and Stewart. My personal choice of six, as my experience stands now, would be:

Unless I had lots of land, I wouldn’t bother with Stewart and Mexicola for fall. Instead, I’d try my best to be patient.

Once an avocado tree of any variety reaches a certain size, where it is capable of carrying at least one hundred avocados (that might be a tree that is roughly 12-feet tall), the harvest season becomes longer than in prior years — surprisingly, almost magically. It is because there are more flowers on the tree each spring, and the bloom season lasts longer, and the avocados are of slightly different ages, and there are so many avocados that it takes you longer to eat through them. All of a sudden, your Lamb still has avocados that taste good deep into fall, and your Pinkerton already has some fruit that tastes good in December. Thus, The Fall Gap becomes a mere crack. It’s not as big a void as it was when your trees were young.

This is not to mention the habit of “off bloom” that is common in certain varieties in certain locations, such as with Carmen. When avocado trees behave in this way, the harvest season becomes even more spread out for a single tree.

And varieties such as Pinkerton and Fuerte frequently have fits of early bloom, which means they might have a few fruit that mature far earlier than their main crop. For example, here is early bloom that I noticed on a Fuerte tree in San Clemente just yesterday, October 3:

There are other methods of managing the natural alternate bearing of avocado trees besides just planting multiple varieties for each season. Some commercial growers routinely girdle their trees in order to manipulate flowering. Here is a link to a video of a commercial grower in Ventura County who girdles his trees in order to harness and manipulate their tendency to alternate bear. Through girdling (cutting into the bark), he stimulates half of each tree to flower and fruit heavily while encouraging the other half to be barren so that each year each tree has half of a fruit load. Watch this video of Paul Nurre on his girdling techniques.

Only space for two varieties?

If my yard could only fit two avocado trees — and remember that avocado trees don’t have to reach 30-feet tall — I would choose a Hass and a Reed, which wouldn’t quite cover the year but would get close.

Come to think of it, before I had my own avocado trees I used to pick from a yard that wasn’t big but had a beautiful pair of trees, a Hass and a Reed. There were excellent avocados ready to pick from those trees most months of the year. And then the house sold and the new owners cut down the trees and poured a slab so they could park their RV in the backyard. Is my schadenfreude wrong, as I imagine them complaining that the avocados they buy in the store so often have poor taste and rotten spots inside?

Hungry for more information about more avocado varieties? Check out these resources:

Here is a variety list with descriptions based on trees at the South Coast Field Station avocado variety collection in Irvine.

Here is a list with descriptions of commercial varieties from Gary Bender’s Avocado Production in California (see page 30).

Here is a list of avocado varieties with descriptions and photos from U.C. Riverside.

Thanks to generous gardeners like you, my Yard Posts are ad-free. Learn how you can support HERE

Where to buy an avocado tree

Fruit trees for a year-round harvest in Southern California