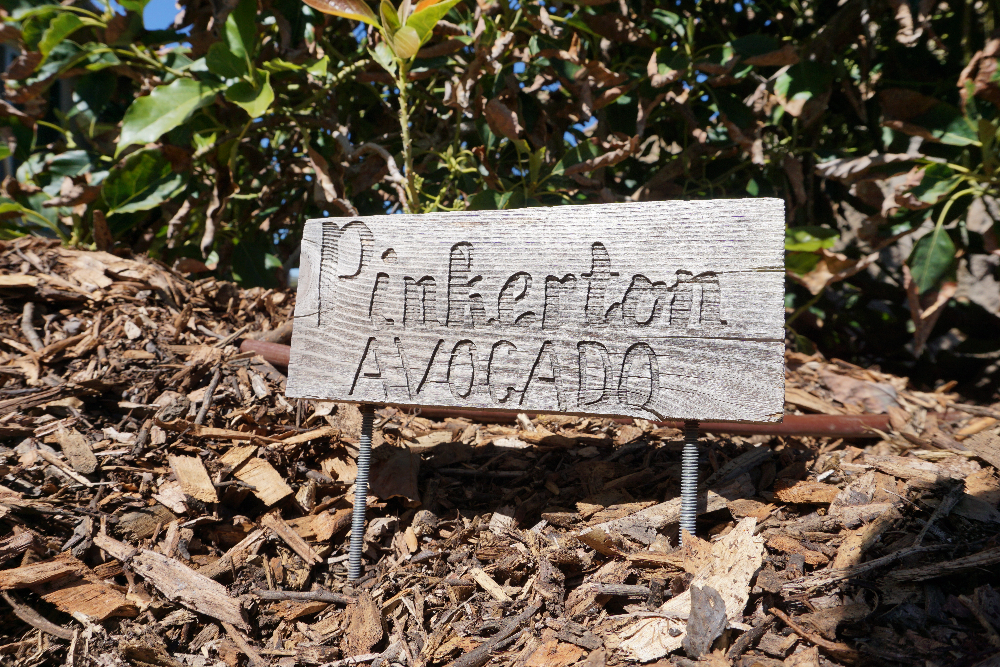 No less an authority on avocado varieties than Oliver Atkins wrote in 1978 that Pinkerton “appears to be the best variety we have come up with for California since the Hass.” Why then, over the ensuing 44 years, have most of us in California never eaten a Pinkerton avocado?

While I don’t have a precise answer, this post will touch on some reasons as I aim to answer another, more important, question: Is Pinkerton a good avocado variety to plant in your yard?

First let’s look at the fruit. Pinkertons are “necky.” In other words, they have an elongated pear shape rather than a round or egg shape. And in some years in some locations, Pinkerton avocados can look extremely stretched out.

Fortunately, the flesh inside a Pinkerton’s neck is solid. This is unlike the Don Gillogly variety, for example, which has a seed cavity inside extending up its neck.

Pinkertons are larger than Hass, but more than that they have a very small seed, meaning you get more flesh to eat in any given avocado.

The flesh has a fine texture and no fibers to speak of. It has a pleasant yellow to green color, and the taste is mildly nutty, very pleasing.

The skin of Pinkerton is a similar green to an unripe Hass and is about as bumpy as Hass, but the Pinkerton’s bumps are sharper. As a Pinkerton avocado ripens, its skin remains green. The skin is a bit thinner than that of Hass.

The skin peels off the flesh of a Pinkerton acceptably sometimes but not always.

Occasionally, a Pinkerton avocado develops a black spot near its bottom end, and this deterioration affects the flesh inside in that area. It’s not as common an occurrence as on some varieties such as Bacon, however.

The main peculiarity of Pinkerton is that it takes two to three weeks for the avocado to ripen from the time it is harvested. This can test one’s patience. Moreover, it can be tricky to judge when a Pinkerton avocado is fully ripe since it softens in the neck before the base. You have to wait to cut it open only when both the neck and base feel ripened.

Pinkerton’s long ripening time was thought to be of benefit when the variety began being test-grown by farmers because it would allow them to ship the fruit long distances.

According to accounts in the California Avocado Society Yearbook of 1978, the variety was discovered by John Pinkerton, who found the seedling growing among Hass, Edranol, Corona, and Rincon trees on his ranch in Saticoy, Ventura County, in the early 1960s. The seedling bore consistent crops of high quality fruit so he grafted wood from it onto three older trees near his office, where he could watch them. He evaluated these trees for a number of years until he was convinced that the variety had commercial potential. In 1975, he received a plant patent on the Pinkerton avocado. Sadly, only three years later, John Pinkerton passed away.

One hope for Pinkerton was that it would, as Oliver Atkins put it, “help fill the void caused by the declining Fuerte acreage and, as it ripens and sizes ahead of the Hass, should tend to stop growers from picking Hass too early.” (CAS Yearbook, 1981)

In 1982, Brokaw Nursery (also located in Saticoy) ran this advertisement for Pinkerton in that year’s California Avocado Society Yearbook:

Frank Koch, writing in his 1983 book Avocado Grower’s Handbook, quoted one of Pinkerton’s early supporters (Warren Currier) as pointing out that Pinkerton trees seem to have “much greater limb strength and tolerate winds better than most other varieties.” This has proven true over the decades. On the other hand, Currier claimed that Pinkerton was less alternate bearing than Hass, which has not proven true in my experience. All of the mature Pinkerton trees that I know have clear “on” years and “off” years.

By 1984, weaknesses of Pinkerton, especially from the perspective of a commercial grower, had become obvious. Bob Bergh, director of the avocado breeding program at University of California, Riverside, listed these imperfections in an all-around fascinating article in the California Avocado Society Yearbook called “Avocado Varieties for California.” They included the fact that Pinkerton trees fluctuated in their production just like Hass as they got older. Also, Pinkerton had a “shorter harvest season than Fuerte;” the Pinkerton fruit “sometimes have hard-spot ripening problems;” and some fruits “tend to become too large” and have “too pronounced neck development.”

In 1989, Hank Brokaw (of Brokaw Nursery) wrote about the challenges of introducing the new Pinkerton variety. Brokaw had planted a few thousand acres of Pinkertons, but found that the slow-ripening of Pinkertons was now seen as a disadvantage since retailers wanted fast turnover, and handlers (companies who buy avocados from farmers and sell to distributors and retailers) complained that Pinkertons “couldn’t be stored under refrigeration.”

As a commercial variety, Pinkerton did not fit into the new marketing and supply chain trends of that era, and not long after, most farmers in California gave up on the variety.

Home growers continue to plant it though, in part because the tree is slightly smaller than Hass and many other varieties.

Pinkerton avocado trees end up shaped much like an orange tree, with a domey, spreading form. And they take this shape for similar reasons to an orange. In one year, branches will grow upright, and then flower.

Then the tree sets lots of fruit, and the weight of the fruit bends the branches down.

The next year all of that fruit is harvested, the tree grows more upright branches, then blooms heavily the following spring and the process repeats.

The leaves of Pinkertons often have margins that undulate.

The flowers of Pinkerton behave in the “A” fashion.

Pinkertons tend to set much of their fruit in clusters rather than being distributed evenly throughout the canopy. They set fruit in clusters especially during years when they have few fruit on the tree overall.

This is similar to some other varieties, such as Gwen. However, unlike Gwen, once new fruit has set on Pinkerton most of it holds all the way until maturity.

Pinkerton starts fruiting at a young age, too. The first Pinkerton tree I ever planted was in a five-gallon container and already holding a nice sized avocado. Here’s one in a three-gallon sleeve holding two young fruit:

Pinkerton’s precocity has been used by breeders such as Bob Bergh, who wrote: “Seedlings [start bearing] in maybe the fifth or sixth year and more in the eighth and ninth year . . . Seedlings of ‘Pinkerton’ have the remarkable ability to start bearing the second year from planting.”

In addition to bearing fruit at a young age, Pinkerton out yields many varieties overall. An avocado farmer in South Africa, where Pinkertons are a more common commercial variety than here in California, once told me that Pinkertons were by far his most productive variety.

In need of a pollenizer

Pinkerton’s high productivity only comes when another kind of avocado tree is growing nearby though, in my experience and in the experience of others (see Gad Ish-Am’s comments here).

I planted a Pinkerton tree in 2016 that bore a few fruit each year until the spring of 2021 when an Edranol I planted beside it first bloomed. The Pinkerton had few flowers itself that spring but still yielded 29 avocados from its six-foot diameter canopy. (It had only yielded six avocados in the previous five years combined, when it had no pollenizer nearby.)

Unfortunately, I have grown Pinkerton for nine years in a location that often gets too cold and too hot for avocados generally. Fortunately, this has given me a chance to observe firsthand the variety’s limits.

As for cold tolerance, Pinkerton is roughly equal to Hass. It is not a variety that tolerates cold better than others that we commonly grow in California.

The main harvest season for Pinkerton starts in March. I’ve picked them in January and February, when they can ripen and taste acceptable, but only in March do they start to reach their potential.

Though commercial growers of yesteryear tried to market Pinkerton as a winter fruit, the main crop of Pinkerton is rightly considered a late winter / early spring avocado. In fact, in the 1989 article by Hank Brokaw mentioned earlier, Brokaw says that John Pinkerton’s ranch foreman originally told him that the Pinkerton avocado “matured about April.” Growers were just trying to market Pinkertons earlier in order to avoid competing with Hass, which also matures about April.

That being said, Pinkerton blooms earlier than many varieties (including Hass), and in some locations it will start flowering as early as October. Any fruit that sets there in the fall will ripen beginning around the following fall. But even with Pinkerton’s early bloom, it still tends to actually set most of its fruit during the later months of bloom (March, April, even May).

I’ve eaten Pinkerton as late as July, but I’d say that high quality Pinkerton fruit from a tree in Southern California is not likely to be picked past May or maybe into June.

In this video I profile the Pinkerton avocado using a late-season fruit:

Is Pinkerton a good fit for your yard?

Pinkerton is an avocado variety worth growing if you want a collection of a handful or more varieties in your yard. It is not a good choice for a yard that can only fit one avocado tree unless neighbors have other avocado trees that can provide pollen for your Pinkerton.

The ideal yard for a Pinkerton is one in which there is space for more than a single avocado tree (because of its need for a pollenizer). For example, here is a lineup of three avocado trees in a front yard with Fuerte, Bacon, and Pinkerton:

Finally, here is a video profile on the Pinkerton avocado tree:

All of my avocado variety profiles are listed HERE