Where and how to buy good avocados 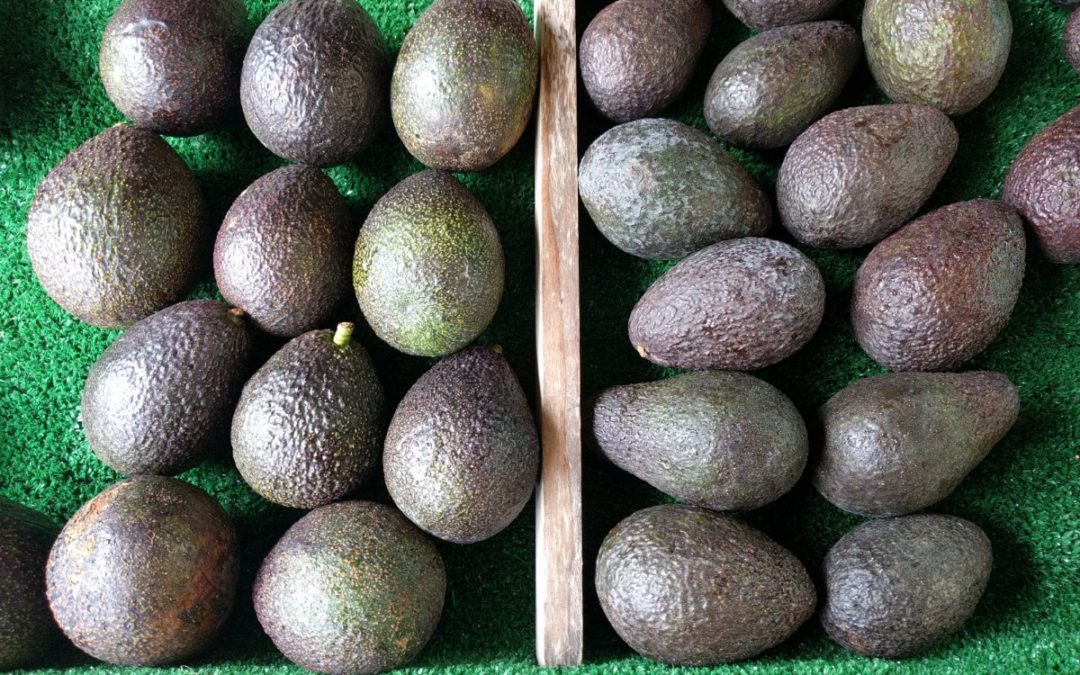 The first thing I look for is where the avocado was grown, and if it’s not from California I almost never buy it. We get imports from Mexico, Chile, Peru, and a few other countries. None of these imports ever taste as good as California avocados. There are myriad reasons, including transportation distance, time in cold storage, and poor handling. It’s not that good avocados are not grown in these other countries; it’s only that in the U.S. we rarely get good avocados from these places.

Look for stickers on the fruit that say USA or California.

Just because an avocado was grown in California does not mean it will be high quality and great tasting, however! California avocados can also be improperly handled between the farm and the grocery store too. California-grown avocados just have a far higher likelihood of being superior, in my experience.

Buy avocados that are green and hard

Secondly, I look for fruit that is unripe. It should be green and hard. You know what people do to avocados on the store shelf. I’m sure you don’t do it, but you’ve seen people do it.

Every poke of their finger tips causes bruising and rotting. Only you can’t tell because the skin of Hass avocado fruit usually turns black as it ripens, the same color as the bruising they’re causing.

But Mr. and Mrs. Squeezy Fingers don’t usually assault green and hard fruit. They go after black fruit, which is also easier to damage since it’s softening. So I buy only the greenest, hardest, most unripe fruit I can find.

Buy avocados that are bagged

Even more reliable than individual green and hard avocado fruit is buying green and hard avocados that are sold in bags. Around me, the stores that most commonly do this are Trader Joe’s and Costco. These bagged avocados are even less likely to have been beaten up by Mr. and Mrs. Squeezy Fingers. Rarely have I bought a bag of four little green California Hass from Trader Joe’s and cut them open to find bruising and rotting inside; they’re almost always of high quality, much more often than any other store-bought avocados.

And I’ve been told from an avocado post-harvest specialist that Costco’s bagged avocados specifically are never placed in ethylene-gas ripening rooms, which almost all other grocery-store avocados are. This removes another potential problem in the chain, as the gassing can be done wrong in many ways.

Even if you can’t find California Hass avocados in a bag, buying bagged avocados grown in a far off country is usually a safe bet in terms of avoiding the bruising and rotting caused by fellow shoppers. For example, I recently visited family in Reno, Nevada, and bought bagged Hass avocados at Costco that were grown in Peru. The avocados were nowhere near the prime flavor of California fruit, but they were all without interior rot. That’s worth a lot.

Buy other varieties when Hass is out of season

A few years ago, I visited some friends in Corvallis, Oregon who buy their avocados at a food co-op called First Alternative. The store still had California Hass available in September so I bought this one:

An irony here is that if, in September, you go to the website of the California Avocado Commission (the industry’s marketing organization) you’ll find at the top of the page: “Season has ended.”

This is misleading. The truth in it comes from the fact that almost all California avocados grown for commercial purposes are of the Hass variety, and the Hass season is winding down. But in September there is still excellent Hass fruit coming off trees in the northern areas of the southern part of California (Santa Barbara County, for example).

More importantly, there are varieties other than Hass that have a later season, and if you can find them, consider yourself lucky. My wife found some Lamb avocados at a Sprouts store the other day, for example. You may have unknowingly seen these too: they’re usually labelled “Jumbo Hass.” (That’s a nonsense marketing name. They’re not Hass in any way.) Lamb is a California variety that tastes great from the middle of summer into fall.

There is also the Reed avocado, which has almost the same season as Lamb: summer into fall. I’ve bought many Reed avocados at Whole Foods Markets in years past.

I asked my friends in Corvallis if they ever got avocados other than Hass at the co-op, and they remembered getting Bacon. Besides Lamb, Reed, and Bacon, I’ve seen some Fuerte avocados sold in select stores, for example at Bristol Farms. But I’ve never seen them in typical supermarket chain stores.

The seasons to find Bacon and Fuerte avocados are from about November through the end of winter.

Now, if you really want to find the best avocados to buy you’ll have to look beyond the grocery store . . .

The advantage of buying avocados at a farmers market is that you can buy varieties other than Hass and that are in season, such as the ones mentioned above. But there are even more varieties to be found at farmers markets. I’ve bought Pinkerton, Edranol, Nabal, MacArthur, Corona, Anaheim, and other uncommon varieties at farmers markets throughout California over the years.

The disadvantage is that vendors tend to come and go. But visit the farmers markets near you and you might get lucky.

Finally, a few California avocado growers have started selling their fruit directly through their own website or on Amazon, shipped to your door. I’ve bought from many of them in order to try them out, but at this stage I can’t recommend any, unfortunately.

Avocados ship very well if picked just before shipping and packed correctly. Many times, I’ve mailed avocados from my own trees to family who live out of state and the fruit has arrived in top shape so I know the method is feasible even at quite a distance.

The shipping does add to the cost, but I would be happy to pay, say, $4 per avocado if each avocado is perfect compared to $2 per avocado from a grocery store where half are likely to have some rot inside.