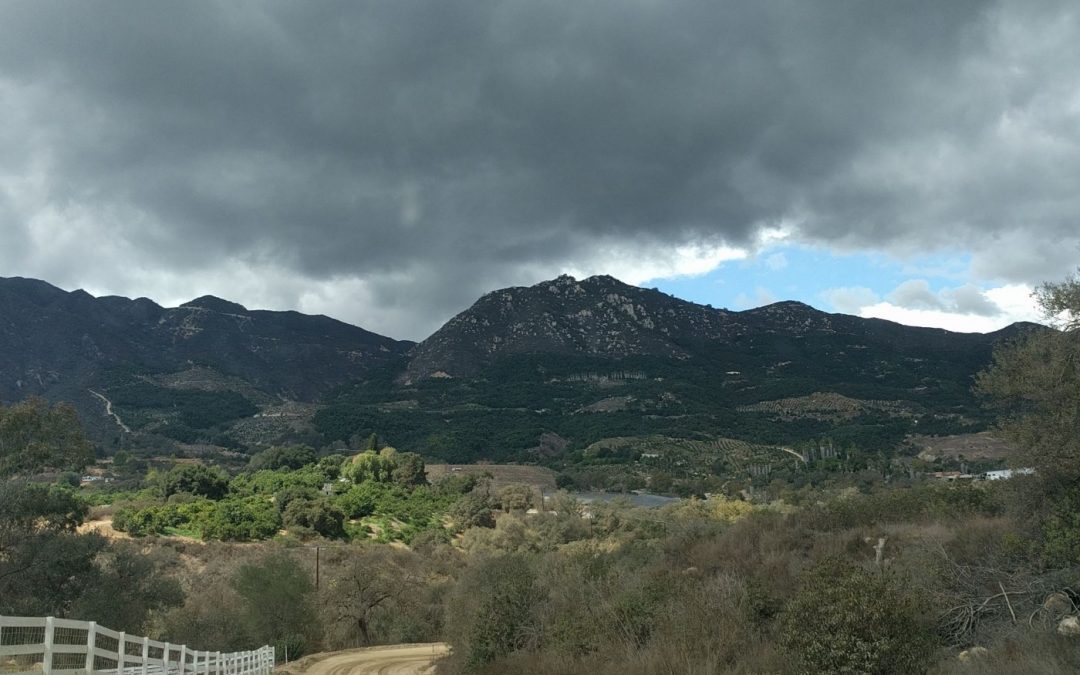 In 2018, I visited the largest organic avocado farm in California. It’s those hills in the photo above — they’re covered with 1,000 acres of avocado trees. And I felt vindicated when I saw that they care for the soil under their trees in essentially the same way that I do on my one acre.

But I’ll get to that in a minute. First, let’s say what our goal in growing an avocado tree is. For me, it’s a consistently fruitful tree, which means it must also be healthy. And how does soil fertility affect our achieving this goal? Avocado trees, like all plants, need certain elements to run their systems properly and produce fruit. So we add stuff to our soil when necessary.

“California soils contain ample amounts of most plant nutrients,” writes Paul Moore in the 1952 Yearbook of the California Avocado Society, the Bible of avocado culture. “The function of fertilization is to supplement deficiencies in the soil, not to feed the tree directly with all its nutrient requirements. The most common deficiencies suffered by avocados are nitrogen and zinc.”

So, the soil in your yard may meet all your avocado needs, but commonly in California, avocado trees need added nitrogen and perhaps zinc. How do we know if this is the case with our own particular soil?

Most easily, says Paul Moore: “Your trees are open books. If you learn to read them you will be able to tell their nutrient needs at a glance. For example, nitrogen deficiency is indicated by pale green or yellowish green leaves. This is in contrast to the normal dark green color of leaves formed under an adequate supply of nitrogen.”

But maybe you’d like to give it a little boost, a little extra just to make some bonus fruit? It doesn’t work that way.

In the book Avocado Production in California, former University of California farm advisor Gary Bender writes, “It should be remembered that there is no “magic bullet” fertilizer that will increase avocado production, unless that particular grove has a deficiency in a particular element.”

Fertilize only as needed

Extra fertilizer will not help and it might hurt. For example, studies on avocado tree responses to different levels of nitrogen fertilization have found roughly the same results for more than 50 years now.  T. W. Embleton and others wrote back in 1958 that they found that “. . . too little or too much nitrogen results in a reduction in yield, and highest production is obtained with a moderate level of nitrogen in the trees.”

In a 1967 article titled “Reasons for Low Yields in Avocados,” Bob Bergh summarized the findings of Embleton’s research this way: “Additional nitrogen applications may produce more luxuriant foliage, but fruit production declined to even less than that obtained at quite deficient nitrogen levels.”

More recently, a study by Mary Lu Arpaia and colleagues, published in the 1996 CAS Yearbook, additionally found that “. . . fruit size from the high nitrogen trees tend to be smaller.” Also noticed was “a decline in post harvest quality of the fruit coming from the trees high in nitrogen.”

In short, blindly adding fertilizers as a matter of routine is not only likely to waste resources but also possibly going to harm your tree’s ability to reach the goal of producing lots of quality avocados.

And if we see pale green leaves that we suspect to indicate nitrogen deficiency, what do we do then? Still, before jumping to the conclusion that soil fertility is the problem, assess other aspects of your care of the tree, especially your watering practices.

As Bender notes in Avocado Production in California, the exact same symptoms as for nitrogen deficiency “are also associated with other problems such as Phytophthora root rot and root asphyxiation due to water-logged soils. In these cases, application of nitrogen will not fix the problem.”

I’ve seen many trees that appeared sickly, yellowish, nutrient deficient, only to poke into the soil and find it soggy. That’s a watering problem, not a fertility problem.

Here’s a specific example. This tree wasn’t watered often enough when first planted, so leaves burned. Then it was watered too much too often such that the soil stayed constantly soggy, so now it has this pale green foliage.

(You might like to read my post, “How much and how often to water avocado trees in California,” to get a better handle on watering. Also see my posts, “Reading avocado leaves” and “Planting avocados in poor soil.”)

Also note that we’re talking about the color of large, mature leaves — not small new ones.

If you’re sure that you are watering appropriately and you’ve planted the tree in soil that drains fast enough such that root rot and root asphyxiation are ruled out, then you should consider pale green leaves (and slow growth) as likely due to infertile soil.

At this stage, you can feel confident that applying some form of fertilizer will improve things. One way to apply fertilizer is to go to a nursery and by a product in a container. I’ve seen many fruitful avocado trees fertilized with a boxed or bagged product, such as E.B. Stone’s Citrus and Fruit Tree Food. You might try that.

But another way is through simply laying organic materials on the surface of the soil under the trees. In other words, you can fertilize through mulching. This is what the largest organic avocado farm in California does, as I discovered during my visit back in 2018.

They make compost from greenwaste (chopped up plants), gypsum (calcium sulfate), and chicken manure. They make giant heaps of it using expensive machinery, and then they spread it under their trees.

When I saw this I felt vindicated, as I mentioned earlier. Why? Look at how I have always fertilized my trees:

Under all of my avocado trees, I maintain a thick mulch of wood chips. But first, when planting new trees, I add compost too. Often, it’s what I call “chicken compost” that I make using the manure and scratching work of my own birds. In terms of ingredients, it’s almost exactly what the large organic commercial farm is using, just without the gypsum.

Here is a video showing my typical application of compost and mulch around a newly planted avocado tree:

Can you really grow the best avocado trees only using compost, manures, wood chips and similar organic matter as mulch? Don’t you need to add other, specially formulated, fertilizers?

The evidence is out there for anyone interested in viewing it. You saw my trees in the video above. More convincing are some larger-scale experiments, one of which was done in Israel starting in 1969.

It was called the Bnei-Dror experiment. In it, Fuerte avocado trees were given chemical fertilizer (ammonium nitrate) or composted animal manure, and results were observed for ten years. The trees given composted manure grew more slowly but produced an average of 50 percent more avocados. (Read more about the Bnei-Dror experiment as reported by Avraham Ben-Ya’acov here.)

How much mulch to add

As for how much organic matter to add to the surface under your avocado tree, that’s hard to calculate with any precision. I personally don’t even try. My approach is to merely make sure that the soil is always covered. As soon as the mulch layer thins out, I add more materials. But for my first application under a tree, I put it down about a foot in depth.

You’ll find that you need to add less mulch as the years go by. It just doesn’t get “eaten up” by the soil as fast as it did in the early years.

After a few years of constant coverage, the mulch-soil interface layer starts to look and feel like a forest soil. Intuitively, you look at the color, you smell it, you feel it, you just know it’s fertile.

A dedicated avocado grower in France named Benoit Vandangeon has published a translation of this post in French on his excellent website Acclimatons.com. Read “Fertilizing avocado trees” in French there.