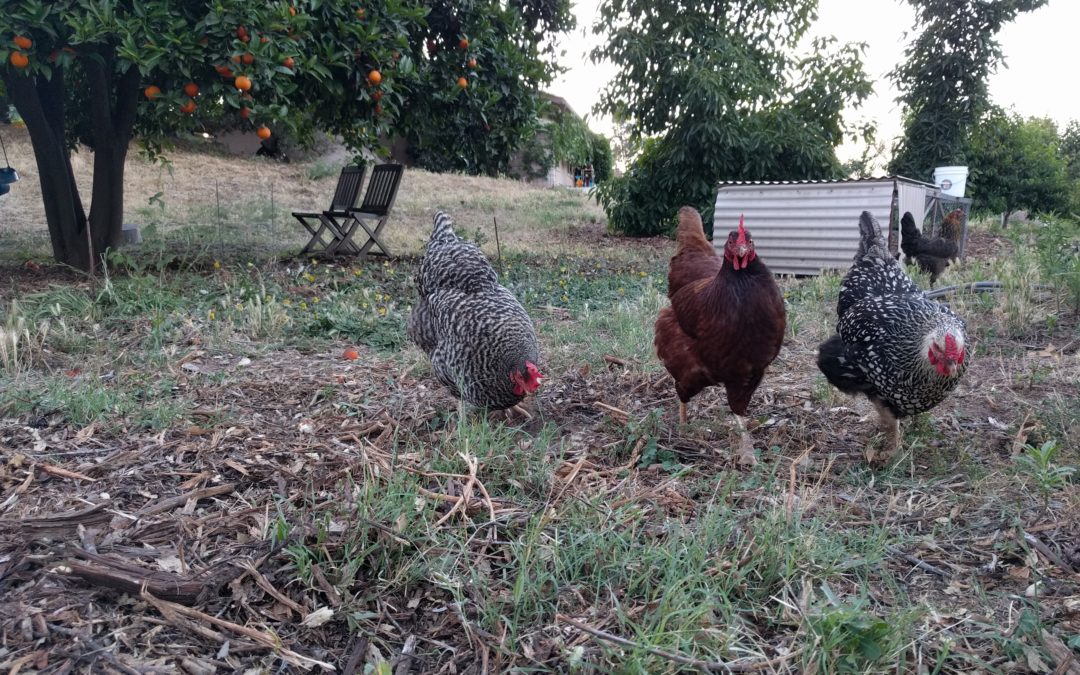 I used to think of chickens as a threat. When I lived in Lesotho, my neighbor’s roaming chickens repeatedly ate the leaves of my chard down to the stems despite my attempts to fence them out. I couldn’t have imagined that I would see them as I do today, as my garden’s little helpers.

Even last spring when I bought four chicks to eat the earwigs and pill bugs who were devouring my vegetables, I didn’t foresee that they would be so valuable to my garden in other ways.

I wrote the post, “Chickens eat bugs in the garden,” soon after embarking on the experiment of using the birds for insect control by running them over vegetable beds in a mobile pen. I recognized their good work in that arena quickly, and here today, one year on, I can update to say that I’m still pleased with their effectiveness at snatching up meals of insect pests. 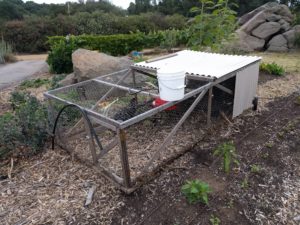 The pen is four feet by eight feet, small enough for almost any yard. It has old lawnmower wheels on the back, and it’s light enough for me to move with one hand.

A chicken’s eye view inside the mobile pen.

This spring I’ve been able to grow many plants from seed that I’d previously given up on because of the bug munching, such as carrots and beets. And I’ve been able to plant seedlings of many crops earlier than in past springs, such as eggplants and peppers. 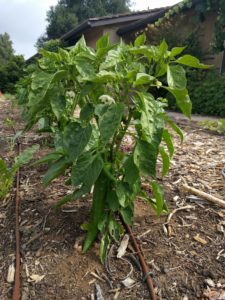 This Anaheim pepper has fruit ready for harvest today (June 1), which is a month earlier than last year.

I would keep our chickens around if the only thing they did for us was feed on the dreaded European earwigs, but over the past year I’ve discovered a few more ways in which they contribute to the garden, significantly.

I used to make compost. You probably know how labor intensive that can be, and how sophisticated the process can seem if you are serious about it. Layer the materials just so, get the moisture level right, check the temperature, turn the pile, blah blah blah. Good riddance.

Composting is nothing less than a natural pastime for chickens. All I do now is throw a bunch of stuff into the chicken pen and out the other end a few months later comes a substance that is better than any compost I’ve ever made or purchased.

If their pen ever starts to stink, I dump in some tree trimmings (leaves and wood chips), and the smell goes away. And over a handful of months, the chickens’ sporting work turns all of that trash into this most beautiful product. 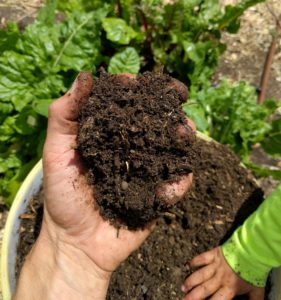 What is it? It’s not manure. It has absolutely no fecal odor. I think of it as chicken compost because it looks vaguely similar to the composts I’ve made in the past with my own hands, and its constituents are essentially a bunch of decomposed bits of things, including chicken poop.

To make this chicken compost, the only effort I put in is at the end where I sift out any big pieces, like sticks and avocado pits. 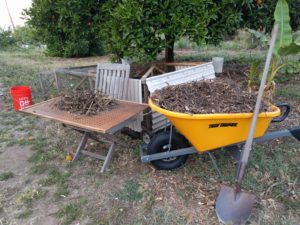 Of what help in the garden is this chicken compost, exactly? Pick it up and squeeze it in your hand: it feels spongy, full of air, like it can’t be compacted by even the strongest of grips. Because of this quality, it infiltrates water well. I’ve noticed this after adding it to the surface of the soil in my vegetable beds as well as when I’ve added it to my potting mix for growing seedlings. Yet it also holds onto the water and remains friable once it does eventually dry.

Furthermore, the plants themselves tell me that they are thriving in it. They tell me this by growing fast and putting out uniformly green leaves, as seen in these tomato seedlings grown in a mix that includes the chicken compost. 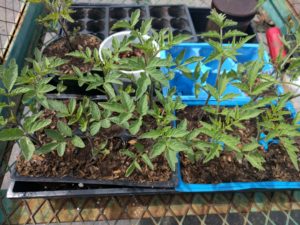 So I started skeptically with the chickens as a tool to manage the populations of earwigs and pill bugs in the vegetable garden, hoping they could be useful rather than a garden nuisance, and now I’m starting to see them as not only useful but nearly indispensable. I don’t want to go back to laboring over inferior compost piles, nor do I want to buy inferior compost or fertilizers — not when I can have this tidy cycle of resources that the chickens create.

Let me acknowledge the costs involved in getting this cycle of chicken contributions rolling. The chicks cost $5 each, I built a small, mobile pen for them which cost me about $100 in materials, including a waterer and feeder, and the ongoing feed costs are around $1 per month per bird (they mostly eat from the yard). But the benefits of their insect control service and compost production already seem to outweigh those costs.

And let me not leave out mention of these. If the purpose of a garden is to provide food, then . . . 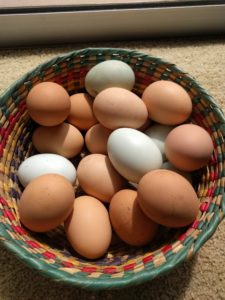 (I’d be happy to share specifics on how I’ve learned to best run the chickens’ mobile pen through the vegetable beds for insect control, how I built the mobile pen, or anything else related to letting chickens contribute to a home garden and not be a nuisance; for example, if you want to let them roam freely for a bit, do it at sunset because they’ll be out for a limited time and they’ll return to roost in their pen at dusk without your needing to herd them back. All of these topics probably deserve their own post in the future. But let me know in the comments section if you’re curious about something now.)