When to give up on an avocado tree 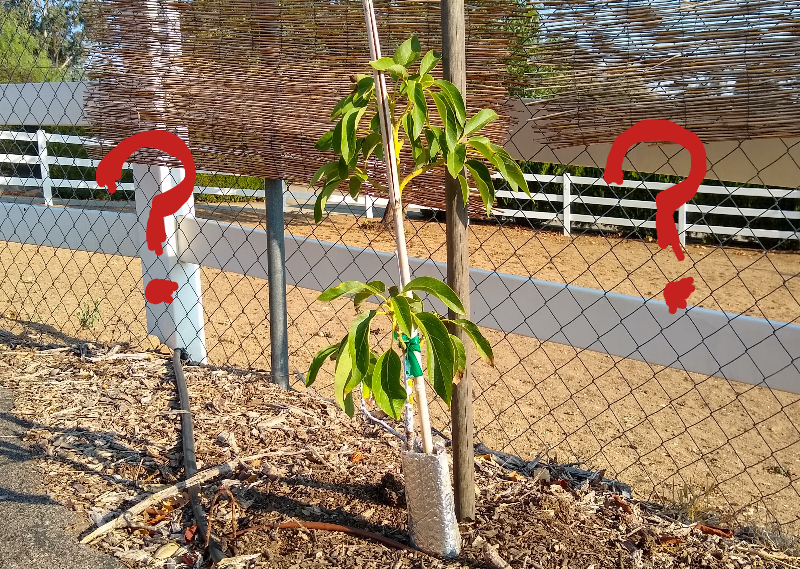 Breaking up is hard to do, but sometimes you’ve got to give up on an avocado tree. Last week, I gave up on three. I’ll show you which and I’ll tell you why.

The first was the GEM shown above, which hadn’t even been in the ground for a year, but early in its life was attacked by a gopher. I killed the gopher immediately after the attack, but small avocado trees cannot recover from much damage to their roots.

I have observed this in numerous other young avocado trees. Unless the damage is only very slight, then even after a few years of good care they never totally rebound. (See, for example, the Sharwil that I planted when my middle son was born.)

Ever since the gopher attack, this GEM tree did not grow as well as it should have. How could I judge that? I have a few other GEM trees that I planted at the same time. Here’s one of the others:

Signs of health on the above tree compared to the damaged one: the mature leaves are larger and deeper green; bronze new leaves are emerging from branch tips. And then, when I scratch away mulch I can find many roots. I could scarcely find any roots, however, on the damaged tree.

It was helpful to have this other GEM tree to refer to. It showed me that the gopher damage was having lasting consequences on the other one, and rather than coddling that sick little thing I ought to cut it down and replant.

Nabal with a bad rootstock

The second tree I cut down was a Nabal that I’d planted in October 2018. On planting day, the tree had slightly pale leaves.

In the past, I’d seen avocado trees green up after planting, and this Nabal did green up temporarily the following spring. But then its leaves again became pale green and blotchy yellow.

This was especially concerning on a Nabal tree, which is a variety of avocado that normally has particularly large and attractive leaves.

Two and a half years is long enough to see that this tree will never thrive in this location. It may have been possible to amend the soil (e.g. lower pH) in order to make the tree happier, but since the trees next door are doing fine without such amendments, I’d rather cut down the Nabal and replant on a better rootstock.

Then there was the Holiday that was five years old and had yet to give a real harvest. It was partly my fault; I certainly could have cared for the tree better. I planted it near a large live oak tree that sucked away some of the water I gave to the Holiday.

Regardless of who is to blame — the Holiday, me, the oak — the tree was not thriving in this location and my water could be spent more profitably elsewhere. I know this for sure because the Pinkerton right next to the Holiday is the same age and has had small crops the past two years. Today it is carrying 33 avocados while the Holiday was only carrying 4.

After cutting my losses with the Holiday, I can divert the water that I had been using on it to other trees in better locations (and more productive varieties). (See my profile of the Holiday variety here.)

Other poor locations for avocados to avoid, if possible, are spots on top of a hill that are too windy (lots of fruit will get knocked off and the trees will need more water); spots that are too low and cold in winter (subjecting them to frost damage and poorer pollination); and spots where the soil has slow drainage, making the trees vulnerable to root rot.

Reasons to cut down avocado trees

In summary, here are four good reasons to give up on an avocado tree:

1. The tree is young (less than two years old) and it has been damaged badly, such as by a gopher, severe underwatering, or severe sunburn. (“How to water a newly planted avocado tree.”)

2. The tree gets bad leaf burn every fall or the leaves throughout the year look blotchy or small or sparse — but you are providing enough water and soil fertility. (See more at “Reading avocado leaves” and “How much and how often to water avocado trees” and “Fertilizing avocado trees.”)

3. The tree is in a poor location (as described above) and you have a better location available. (Ben Faber, farm advisor in Ventura and Santa Barbara Counties, goes into detail about this in his recent presentation for the August 2021 Seminar of the California Avocado Society. See 32 minutes into this video.)

4. The tree doesn’t give you many avocados, and you have realistic expectations. (See “How long until an avocado tree fruits.”)

These are “good” reasons to cut down such trees because you deserve better, and you can probably achieve better.

Can you plant a new avocado tree where another failed? Probably. It depends on why the first tree failed, as well as whether you are willing to improve conditions for the next tree.

For example, I can replant where that little GEM was attacked by a gopher. I ought to first crush all gopher tunnels in the area, and it might also be wise to plant the new tree in a gopher basket.

With the Nabal on a bad rootstock, I should have no problem planting a new tree on a better rootstock in that very spot. The other avocado trees surrounding it which are thriving show that it’s unlikely that the general area is inhospitable to avocados.

In contrast, as for the Holiday, I would do better abandoning that spot. The nearby oak tree gives such strong root competition there that establishing a wimpy tree like a young avocado will always be challenging. It can be done; I do have other avocado trees producing near the oak, but they are not as productive as other trees farther from the oak, and they require a lot more water than my other avocado trees (because the oak is stealing much of it).

I’ve seen young avocado trees near large trees in other yards and groves that struggle like the Holiday. And I’ve noticed that three strategies help: adding extra water, especially with a broader wetting pattern; pruning the roots of the large tree with a shovel or something similar; and pruning the canopy of the large tree so that it needs less water.

Yet the only true solution to this arrangement is to either plant the avocado farther from the large tree or entirely cut down the large tree.

We might have to cull a few mistake trees until we get to that happy, productive avocado tree. I sure have! But those mistake trees are only full losses if we don’t use them as lessons.

Here’s a video I made about cutting down the GEM and Nabal: