The Holiday avocado tree: a profile 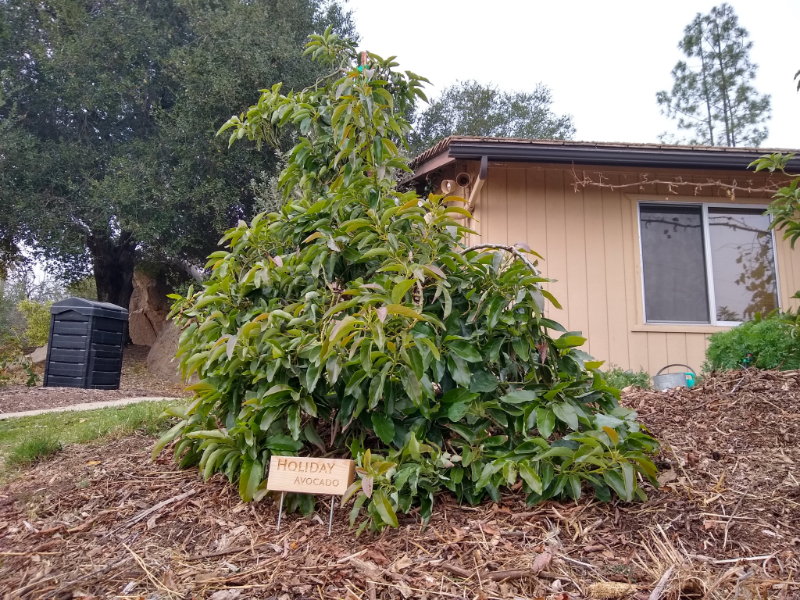 Holiday sounds too good to be true: a dwarf avocado tree that makes large fruit which taste excellent. But it is true . . . kind of.

I planted the Holiday in the photo above four years ago because in that spot I wanted a green screen of privacy year-round that was about head high. I’m now beginning to get privacy, but from an avocado tree I also want avocados. Yet it has not matured a single one. Most of my other avocado trees have had harvests by year four.

Fortunately, I’ve been able to eat Holidays from other people’s trees. The fruit is large, far larger than Hass but smaller than Queen.

The seed size of the Holiday is large, but since the avocado has so much flesh it is not a problem.

Sometimes, Holiday avocados develop rot at the stem end as they’re softening. In my limited experience, this happens more often with Holiday compared to other varieties when home grown and not store bought. I’ve heard from others with similar experiences of Holiday’s imperfect ripening.

Snap harvesting compared to stem clipping hasn’t made a difference in the incidence of stem end rot on Holiday for me:

The flesh of the Holiday has only a few fibers. The flesh texture is dense, similar to Gwen, not melting like Bacon.

The flavor is strong and reminding me of Nabal. On June 1, 2020, I gave one of my son’s a half of four avocado varieties: Holiday, Hass, Reed, and Don Gillogly. He said he liked the Holiday a lot but that he liked the Hass and Don Gillogly more. Eventually, he stopped eating all of the varieties except for Hass and he said, “Hass is just the yummiest avocado even though it’s small.” We must remember, however, that Hass is at the peak of its flavor in June here in San Diego County (as is Don Gillogly) whereas Holiday would get a bit richer by hanging on the tree a bit longer, and Reed is barely starting its season in June. So such a side-by-side comparison can never be taken too seriously.

You may have heard that Holiday is called Holiday because its harvest season starts around Labor Day and lasts until Christmas and New Year’s — “the holidays.” I haven’t found this to be accurate, however, at least not for San Diego County. For example, a Holiday tree that I’ve eaten from near the ocean in San Diego matures fruit yearly beginning around May. While I ate a Holiday avocado from a tree in inland San Diego County this past summer on August 27 that had dropped from the tree because it was over mature. Its seed had sprouted inside and grown roots throughout the entire bottom half of the fruit. Even Holiday avocados that I’ve picked in May have had sprouted seeds, indicating full maturity.

Therefore, I would estimate that Holiday’s harvest season in San Diego County runs from about May through July. Locations northward should likely add a month or two.

The harvest chart that Julie Frink has created for varieties in the collection at the University of California’s South Coast Research and Extension Center in Irvine, Orange County, lists the Holiday harvest as July through November.

If the harvest season of Holiday starts as early as May down in San Diego County, then which May is it? This would be the second May after flowering. In other words, the avocados are going to grow on the tree for at least 12 months.

They will look big during their first winter but don’t be fooled. Here I am holding a Holiday avocado in December. Notice that the skin is still shiny:

My current Holiday avocado tree was planted in 2016 and here at the beginning of 2021 it has not held a single avocado to maturity, as I mentioned earlier. But before this Holiday, I grew another Holiday tree for four years in a yard near Balboa Park in San Diego. I inherited the tree with the yard, and it looked to be only a year or two old when I moved in in 2008. Anyway, that’s two Holiday trees for me in two locations, both not giving a harvest within four years. Both of these trees flowered and set some fruit, but the fruit always dropped before being ready for harvest.

I’ve heard similar reports from enough other growers and seen some other trees do the same thing to think that this is a Holiday habit. The habit is that the tree does not bear much fruit early in its life, and it often grows fruit for around a year only to shed it before the fruit is mature.

This is not to say that Holiday avocado trees bear no fruit, however. It’s only to say that I’ve never seen a Holiday tree that is a precocious or heavy bearer. Not even close. In fact, every Holiday tree that I know that is near another avocado tree is outproduced by that other tree. (The other varieties that outproduce nearby Holidays that I know include Pinkerton, Gwen, Don Gillogly, Lamb, Hass, Sir-Prize, and Bacon.)

On the plus side, what fruit Holiday avocado trees do bear are held inside the canopy, covered by ample leaves and protected from the sun. This is an especially desirable characteristic for an avocado tree that is being grown in a hot, inland location. Here is a Holiday tree in inland San Diego County, with fruit well protected by foliage (I promise, there’s fruit in there):

What we now know as the Holiday variety of avocado was first known as “XX3” within the University of California’s avocado breeding program, from whence it came. And it is said to be a grandchild (a seedling of a seedling) of a variety called Murrieta, or Murrieta Green.

The UC breeding program was looking for new varieties with commercial potential, but Holiday fruit were too large and the tree was too low and sprawling to have a future in commercial groves. Nevertheless, the variety was released in 2001 since it was thought that backyard growers might be interested in a tree with such a growth habit and big, green fruit. (See more notes from Julie Frink and Bob Bergh about the development of Holiday here and here.)

It was a nursery who propagated XX3 trees that began to market them with the name “Holiday.” I don’t know for sure which nursery first used the new name, but the earliest Holiday tree I ever grew was propagated by Durling Nursery and they labeled my tree’s tag “XX3/Holiday.”

However you see it, if you want a Holiday to lift itself off the ground and act like a tree as opposed to a shrub, it must be staked. This is my Holiday at two years old, when I thought it would continue growing up like avocado trees do. No need for a stake, right?

But it flopped and flopped. The trunk didn’t lean; the branches just have a habit of sprouting up and then weeping back down to the ground. So my tree is now staked again at four years old.

If I were growing a Holiday for the first time, I would train it up a two-by-two stake from day one, as this Holiday was trained at the University of California’s South Coast Research and Extension Center in Irvine.

A friend planted a Holiday and a Don Gillogly only a few feet apart from each other at the same time in 2008. You can see which tree has dominated the other by looking at the trunks:

Here are the same trees from the outside, Holiday in front. The Holiday has never been pruned but the Don Gillogly gets pruned a couple times a year to keep its size down.

The leaves of a Holiday tree are narrow and cupped for avocado leaves. They remind me of Ficus benjamina leaves. They are attractive and graceful.

Holiday avocado leaves also show moderate tolerance to both heat and chloride in irrigation water or insufficient irrigation. I’ve noticed this in my own Holiday trees as well as others.

Is Holiday a fit for your yard?

Should you plant a Holiday avocado tree in your yard? It depends on what you want out of an avocado tree and the space you have.

Holiday really does deserve the label dwarf, and I know of no other avocado variety that is commonly available that grows as slowly and in a mounding fashion. So if you’d like an avocado tree that naturally shapes itself like a bush, then Holiday fits the bill.

Holiday really does make large avocados that taste excellent. Frankly, Holiday’s fruit is bigger than I prefer, but there’s no doubt that its size impresses some people. And though I have heard a few people who aren’t impressed by Holiday’s taste, I have met more who find them delicious. In terms of overall eating, they aren’t quite in my personal top tier, but they are very good and I would never turn one down.

Yet, Holiday doesn’t make many of those big, delicious avocados. If you want to get the most fruit out of the smallest tree, Holiday does not meet that efficiency standard. You could probably get more fruit out of a small avocado tree by instead growing varieties such as Pinkerton, GEM, Wurtz, Gwen, or Lamb. These varieties would all require pruning in order to keep them down to a size that Holiday would keep itself naturally, but if harvesting the most avocados as possible out of the smallest tree is your goal then that is the recipe I would follow.

Add a Holiday to a collection of avocado trees, but if you lack yard space and desire a single small, productive tree, then I believe there are better options.

Here’s my video profile on the Holiday avocado tree:

See my other profiles of avocado varieties HERE