When to pick avocados 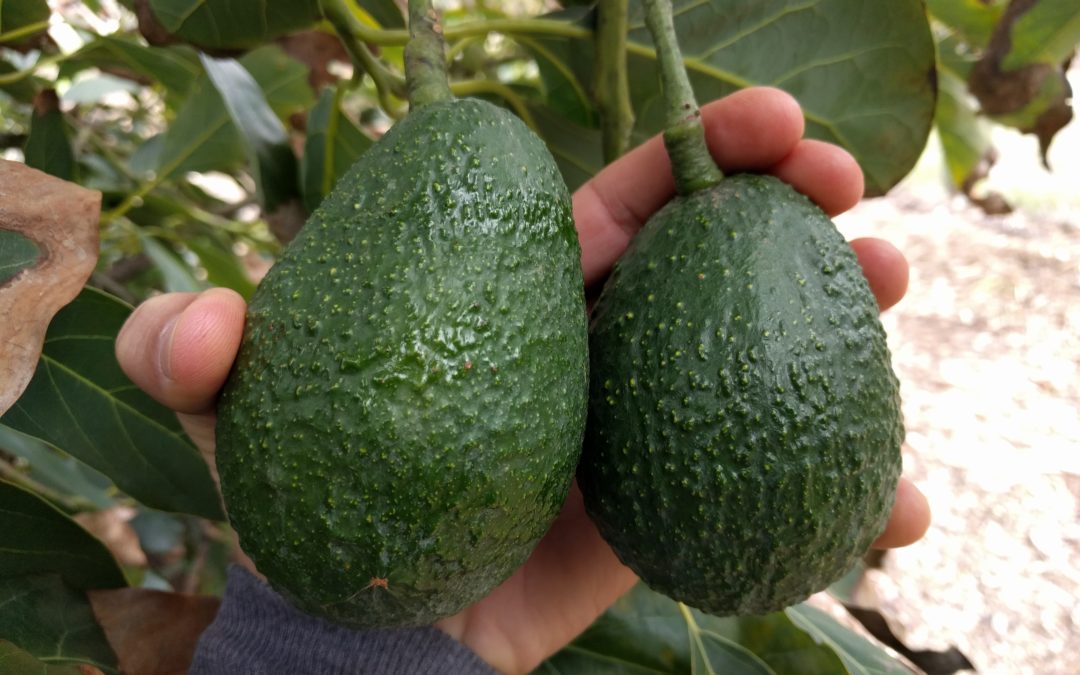 My grandpa once asked me when to start picking fruit from his Hass avocado tree. I said February. But it’s true that I’ve been picking one every now and then from my Hass tree since November. They’ve tasted acceptable, but I know that from February they’ll taste good, so I said February. Further, from March or April they’ll taste wonderful. There is no simple or correct answer to my grandpa’s question.

If you know the variety

That said, if you know which kind of avocado tree you have, then there are reference charts you can use to give you a general sense of a variety’s harvest season.

Here’s one that I made: 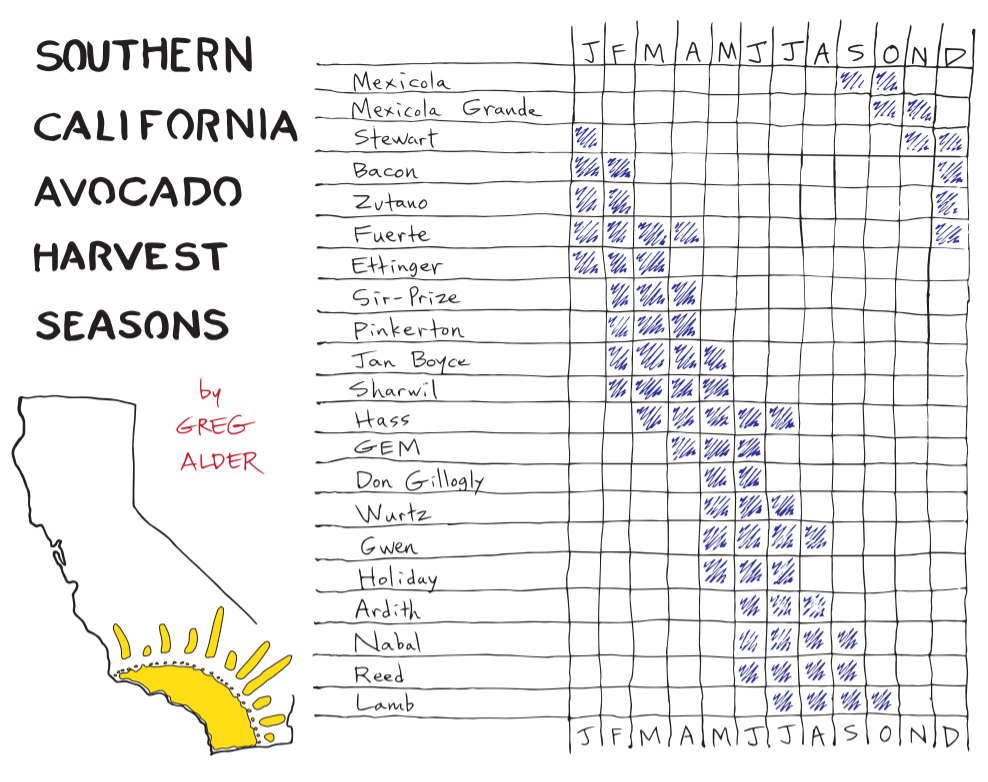 Another such chart is this one by Julie Frink, based on observations in Irvine, Orange County, California. It shows the eating seasons of 27 avocado varieties.

Just keep in mind that any chart should only be used as a rough guide. When fruit from your tree will taste best to you might be on the front end or back end of the months listed.

Also keep in mind that it’s slightly warmer the farther south you go in California, so if you live in San Diego your avocados will mature a little earlier in the year than if you live in Santa Barbara. I have picked good-tasting fruit from a Hass tree in Carpinteria in November — not the first November, but the second November. In other words, the tree had bloomed in perhaps February and the little fruitlet began to grow, and then it hung on the tree for almost two years after that. When I picked it, the fruit was totally black. But it was still totally delicious.

You might also be interested in knowing that the California Department of Food and Agriculture’s Avocado Inspection Program controls when commercial farmers can pick and sell their fruit. They issue maturity release dates each year. You can view the 2020-2021 dates here. The varieties they list are (in order of harvest): Bacon, Fuerte, Zutano, Hass, Pinkerton, GEM, Gwen, Lamb, and Reed. (Reed’s dates are announced later than the others.)

These dates can be used by us backyard growers as guides for when to harvest. For example, the CDFA allows the picking of the biggest Fuerte fruit starting on October 27, and then big Hass fruit one month later on November 28, while big Lamb fruit can’t be picked until May 8. (Small fruit is always released for picking at later dates compared to big fruit.) This gives us an idea of the order of maturity and harvests of different varieties, as well as the amount of time between the seasons of each variety; for example, the Lamb season starts more than six months after the Fuerte season.

If you don’t know the variety

But what if you don’t know which kind of avocado tree you’re picking from. Some years ago, a friend moved into a house that was shaded by an enormous avocado tree with large round fruit that had shell-like skin but whose varietal name no one told him. Through trial and error, we figured out the season for picking that tree’s fruit (and we later concluded that the tree was an old variety called Nabal).

Here’s how to approach such a situation:

Pick the biggest fruit on the tree, and especially a big fruit whose skin is dull, not glossy, and see how it ripens. Be patient. Ripening (the softening of the flesh inside) sometimes only takes a couple days but can take a couple weeks. If the skin shrivels near the stem end, then it is immature. If the fruit never softens beyond a rubbery texture, then it’s immature. Wait about a month to pick and test the next big avocado from the tree.

On the other hand, if the fruit softens but when you cut it open the flesh is dark yellow and tastes overly rich, cheesy, then you’re too late. Next year, start picking about six months earlier. In other words, if you pick one that’s too mature in July of this year, then try picking the next crop starting in January next year.

By the way, if you want to try to figure out which kind of avocado tree you are picking from, use the maturity season that you discover and refer to one of the charts above in order to get names of possibilities. For example, if it tastes good in the summer then that eliminates Bacon, Pinkerton, and Fuerte, but it leaves as possibilities Hass, Reed, and Lamb. Then search for those names on the U.C. Riverside Avocado Variety List to see if one fits the description of your fruit and tree. This is better than doing a general web search because unfortunately, a lot of what you’ll find on, say, Google Images is mislabeled.

No matter what, mark your impressions of the fruit you pick on a calendar so you don’t have to keep dates in your busy mind. Or, what I do is associate a harvest season with a holiday or birthday. For example, Bacons can usually be picked starting on Halloween but they begin to taste very good around Christmas. 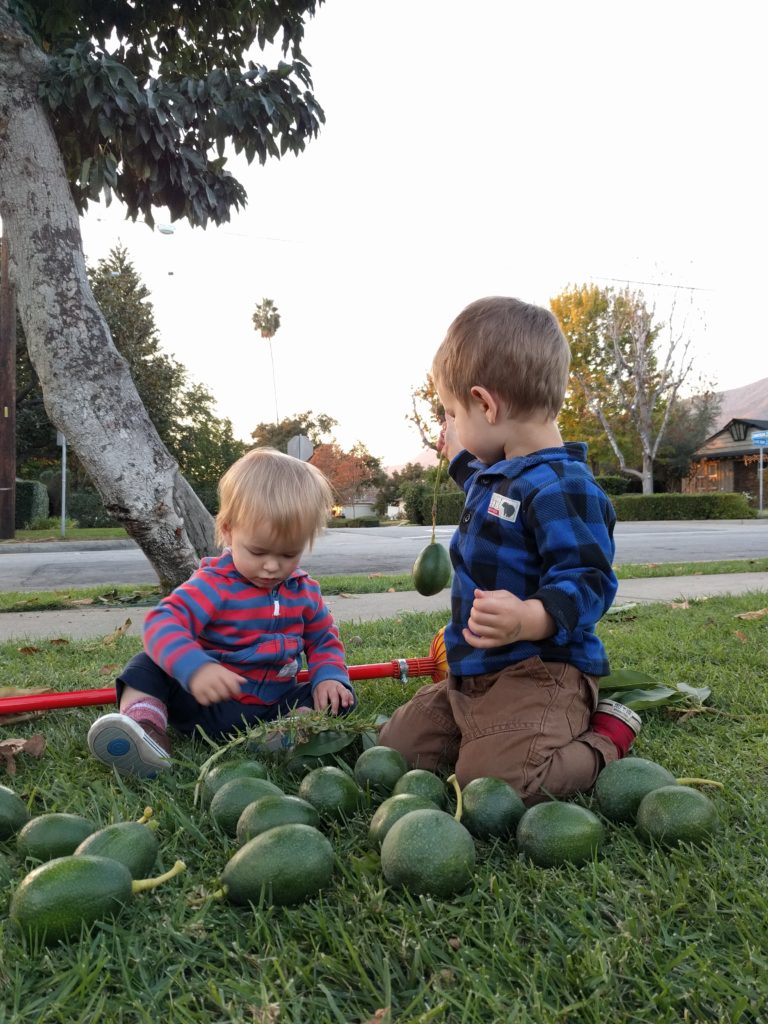 My boys helping with the Bacon avocado harvest.

How to tell if an avocado is ripe

How to harvest avocados

All of my Yard Posts are linked HERE