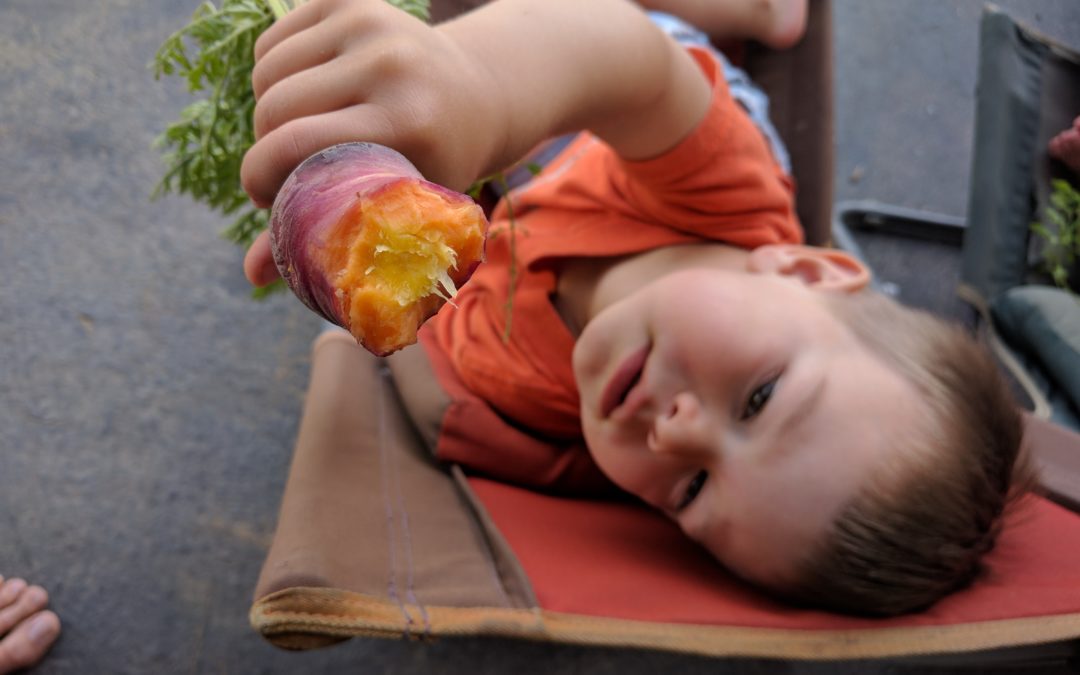 I gave up growing carrots for a few years. I was failing at them; I got discouraged and quit. I first got back in the game because I was wearing the title “Master Gardener” and felt ashamed to do so while being incapable of something so fundamental.

And then the way I started growing carrots again was by experimenting with whether they could be grown by transplanting. (Yes — contrary to common advice — they can, as I wrote about in this post.) But I was truly hooked after harvesting those first transplants, when I saw how much my family loved having carrots to dig up in the garden whenever they felt like “eating like a bunny,” as my son called it.

So, over the last two years I’ve been really focused on improving my carrot-growing skills. Here, let me share a handful of keys to success to growing carrots specifically in Southern California that I’ve found.

You’ll see on a packet of carrot seeds something like this, “Sow in early spring or late summer.” But that’s not entirely accurate for Southern California.

For Southern California, a seed packet should say, “Sow from late summer through early spring.” I think of it as mid September through winter and into early April.

Technically, we can grow carrots all year round, even in summer like most other climates in the country, but I wouldn’t. Or, I should say, I won’t again. This last year, I experimented with growing carrots every month of the year and found that the ones that grew through summer just didn’t taste very good. The plants always looked good, but the roots tasted disappointing: bland or bitter or tough in texture. I’m not sure why, but others always say that carrots don’t like heat, so . . .

Here in September is a great month to start growing carrots again, after the summer hiatus. Carrot seeds germinate fastest when the soil temperature is warm as it is now, between 65 and 85 degrees. Fast-germinating carrots: an oxymoron? It’s relative. According to this University of California chart, within that temperature range it takes carrots 6-7 days to emerge while in the colder soil temperatures of winter it might take around 20 days.

I sowed carrots on Monday, September 11, 2017 and here on Friday, September 15 I’ve already noticed a couple of precocious germinators, like this little fellow:

That’s only five days! Last fall and winter, I noted how long it took my carrot sowings to germinate and emerge from the dirt:

As you can see, the carrot seeds started growing faster in the early fall when the soil temperature was warmer, and this is so convenient because carrots are annoyingly slow at germinating in general compared to almost every other vegetable. Why is the slow germination annoying? Because carrot seeds are tiny and have to be sown shallowly (barely cover them with a quarter-inch of soil or compost) and yet they have to be kept moist for the entire time they’re sitting there in the soil getting started with life. If you let the carrot seeds dry out, they’re dead. So the faster they germinate, the less time you have to stay focused on keeping them moist.

A few tricks to keeping that soil moist include laying burlap or newspaper or shade cloth over the dirt that you’ve sowed carrot seeds in, but I usually just give the bed a showering every afternoon and that’s sufficient, even in September when afternoons are in the 80s. Crucial for that to work is being sure to soak the soil well before sowing also.

Actually, the best “trick” to keeping the soil moist while carrot seeds germinate is sowing in the winter. Here in Southern California, winter weather is mostly cool and rainy. In fact, for the sowings I made last December, January, and February, I never had to irrigate since the rains took care of keeping the soil moist.

If you have a soil that forms a crust on top when it dries, that can be an obstacle for carrot germination. The dirt in my first garden in Lesotho used to crust badly, I remember all too well. My garden beds now don’t tend to get a crust in part because I try to keep a layer of compost on the surface, which I suggest you try if your soil does crust when it dries. As you know, it’s hard to water soil that has a crusty surface.

And one last thing about dirt: it doesn’t need to be dug up and loosened in order to produce good carrots. I used to do that, but I haven’t in many years, and my carrots are as good and straight (or as bad and forked) as they ever were.

Another reason I prefer not to use a cover (burlap, newspaper, shade cloth) over the soil where I’ve sown carrots is because it provides an ideal hiding place for bugs that love to eat your carrot plants as soon as they sprout. I’m thinking of pill bugs and earwigs, primarily. These little pests were probably the biggest reason for my carrot failings in the past. Conversely, my control of these little pests is probably the main reason I’m growing pretty good carrots consistently nowadays.

I use my chickens to get rid of pill bugs and earwigs. (Here’s a post I wrote about that.) Without chickens, the best thing you can do to avoid having large numbers of these, or snails and slugs, is to eliminate their hiding places — that means mulch, cracks and crevices, any dark and moist place. If there are lots of these guys around, you’ll see your baby carrot plants appear one day and disappear that very night. That’s what used to happen to me, and it was so discouraging.

You can attempt to cheat the system and go around the germination and bug challenges with carrots altogether by using transplants or growing carrots in a pot. Heck, might as well put carrot transplants in a pot. Some years back I grew a very nice crop of carrots in a pot that was only a little more than a foot deep.

There are a few things to look out for as the carrot plants grow and as harvest time nears. If the plants are too close together they often twist around each other. The roots come out looking like a cork screw. I think it’s cool looking . . .

. . . but if you want straight carrots, then make sure you thin the carrot plants to about two inches apart.

Also, carrots will get green shoulders if they are exposed to the sun. If you don’t like that, just scoop some dirt up over them anytime you see the top of the roots above the soil surface.

If you leave carrots in the ground long enough they will flower, which I think is totally worth allowing and enjoying. You can also save the seeds that result from those flowers if you let them dry. Then use those seeds to grow another round . . .