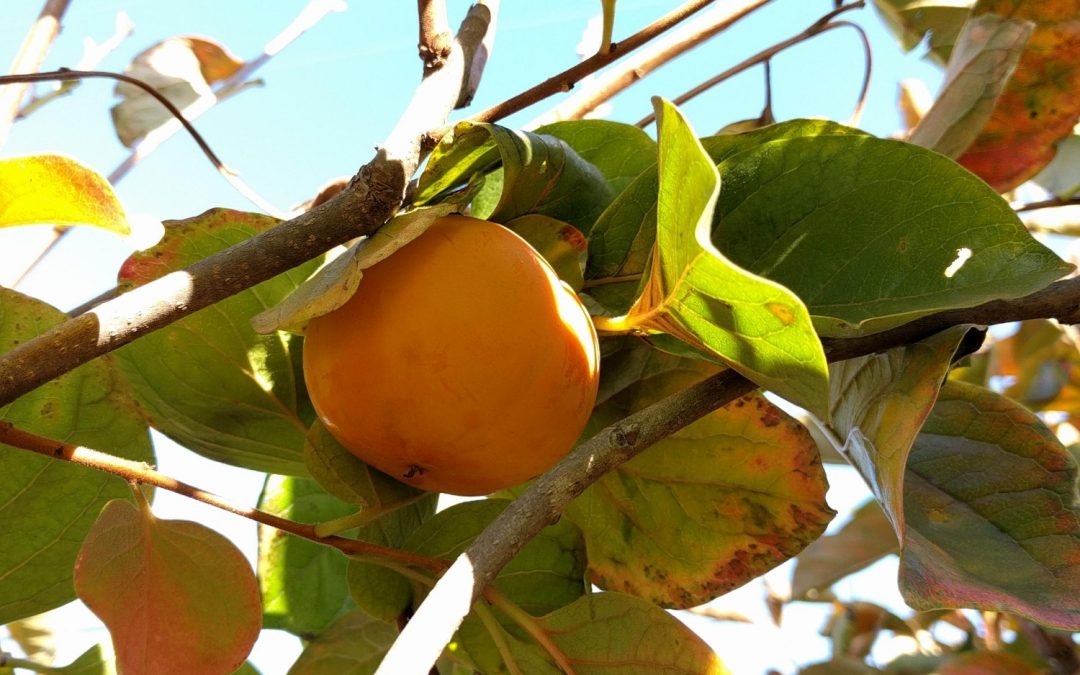 Shoemaker Farm will be open for persimmon picking starting on October 27. The farm address is 18131 Traylor Road, Ramona. They will be open from 9 AM to 4 PM on Thursday, Friday, Saturday, and Sunday. The cost for a five-gallon bucket full of persimmons will be $35.

While working in the yard yesterday, an Asian woman with a heavy accent stopped her car and asked if I knew where Shoemaker Farm was. I’d never heard of it, I said.

“There are persimmons,” she said.

“Aah! It’s just down the street.” I pointed.

There’s a u-pick persimmon orchard two blocks from our house, only I hadn’t known the name.

This morning, I loaded up my two sons and drove the truck down the street. For $20, we got to fill up a five-gallon bucket.

Miles seemed to think that it was his job to take the fruit back out of the bucket and toss it on the ground.

There were two older women picking to the east of us and three Asian families picking to the west of us. These were Fuyu persimmons. They come from Japan. It made sense that the people most interested in picking a bucket of persimmons were immigrants from Asia.

But I didn’t fill my bucket to the rim.

During the picking, we took a break and ate a couple. Also, and more importantly, a couple days earlier while taking a jog near the persimmon orchard, I had picked a couple because I wanted to see if they were ripe. I had known that I would come pay for a bucket soon — that was how I justified the “theft.”

When we were done picking, Cass, Miles and I brought our bucket back to show Mrs. Shoemaker.

“You didn’t quite fill it up,” she said.

“I know. We ate a couple while we were down there picking.”

“Well, I’m going to fill it up for you,” she said, and she fetched a nearby plastic bag of persimmons.

I felt guilty, but I didn’t say anything, and then Mrs. Shoemaker made me feel guiltier.

“Ed caught a woman trying to steal these the other day, so let me put them in your bucket.”

If you want to pick persimmons

The season starts in late October and ends in mid- to late-November. Here is the address of Shoemaker Farm: 18131 Traylor Road, Ramona, (San Diego County), California 92065. See their phone number and email on this card:

As for actually picking the persimmons, it’s best if you have hand pruners with which to clip the stems. Persimmons don’t pull off the tree so easily. If you do try to pull them off, then give them a few twists before the pull.

Early in the season, you can find plenty of fruit to pick by hand while standing on the ground. However, if you’re there later than about November 10, consider bringing a pole picker or step ladder. Much of the fruit left on the trees will be in the upper part of the canopy.

Barely made it this year. Picked on the last day of the season, November 17. We are so grateful that the Shoemakers continue to allow the public to pick persimmons on their farm. It’s a unique offering in Southern California, the fruit tastes better than any I’ve had anywhere else.

I still feel guilty, and even this year I didn’t totally fill my bucket.

We picked earlier this year so it was easy for the kids to help as much fruit was within their reach.

The price remains $25 for a five-gallon bucket, and you’ll need to leave a $10 deposit until you return the bucket.

Also note that the Shoemakers do grow other varieties of persimmon besides Fuyu:

The crop on the trees this year is magnificent. The Shoemakers estimate it might last beyond Thanksgiving, as it is one of the biggest they’ve ever had. (This is welcome, and not so surprising, since the crop on their persimmon trees last year was very weak.)

We visited to pick on November 4 and there was no need for a ladder; the trees had so much good fruit hanging down low that even my young children could do all the picking by hand from the ground.

Do note that the Shoemakers grow lots of other fruit, which they have for sale too. There are pomegranates, Valencia oranges, figs, and feijoas (pineapple guavas) in addition to the many varieties of persimmon.

A list with all of my Yard Posts is HERE