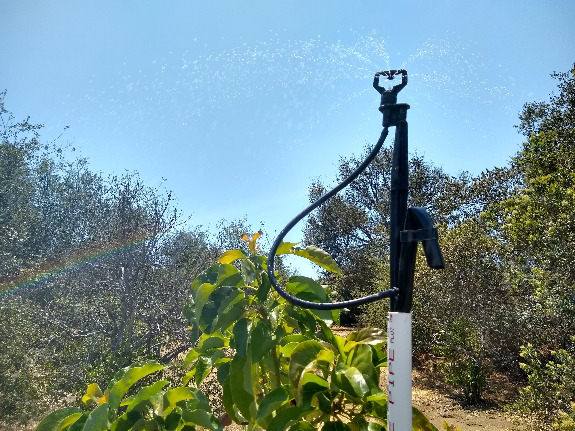 “Does not the spraying of the foliage of the trees protect them to some extent in hot weather?” asked J.B. McLaughlin, rhetorically. He had seen the effects of this practice for mitigating heat when he tried it during the devastating heat wave of more than a century ago, on June 14-17 of 1916: “I have 23 varieties of which only 4 were injured. I sprayed the foliage during the hot spell and only the bark on exposed trunks and limbs was injured on a few trees; the rest were not injured.”

Watering an avocado tree’s canopy for evaporative cooling is not a new idea, and its benefits are undeniable. We could even guess that it works before trying it, as we know how much our own bodies are cooled down by jumping into a pool on a hot summer day.

In 1962 an experiment was conducted to quantify these benefits, in terms of how many degrees the temperature could be reduced. Miller, Turrell, and Austin wrote in “Cooling Avocado Trees by Sprinkling” that “temperature reductions up to 5 and 7 degrees were obtained.”

The goal of their experiment was to see if using overhead sprinklers for evaporative cooling could reduce the temperature sufficiently in order to prevent fruit drop from hot weather. Contemporary avocado growers using this method in their commercial orchards have reported that it can indeed totally prevent the loss of fruit during high heat. A commercial avocado grower named Matt Nelson of Temecula employed overhead sprinklers to cool his grove during the heat wave of early September 2020 and reported zero fruit drop while other avocado groves in the area had losses. (See the interview with Nelson in this video by Index Fresh.)

In this post I’ll describe the way some commercial growers like Nelson use overhead watering, but I’ll focus on how home growers can make use of it too. I’ve been trying to achieve evaporative cooling in various ways on my own avocado trees ever since I first encountered the idea in Reuben Hofshi’s paper from 1998 titled, “Dreaming in Reality.” I’ve tried out some new designs in the last few years that I’d like to share.

For home growers, the best way to get water all over the canopies of our avocado trees in order to cool them is likely to be through holding a hose in our hands — the simplest method. When I do this, I prefer to use a shut-off valve at the end of the hose so I can adjust the volume, droplet size, and distance that the water sprays.

Farmers can’t walk around with a hose spraying down hundreds of trees though. They mount sprinklers on posts between trees. Some use high volume sprinklers that shoot water far, and because of that they only need a handful of sprinklers to cover an acre of trees.

Others use low volume (micro) sprinklers that only throw water up to about 30 feet so they need more sprinklers by comparison.

I’m a home grower, and most of my avocado trees are arranged in pairs or rows, not blocks. So I’ve had to come up with other ways to use overhead sprinklers efficiently to cool my trees. Over the past couple years, I have been experimenting with two main ways so that I don’t have to run around spraying trees with a hose.

First, if the tree is short, less than approximately 10 feet tall, then I mount a micro-sprinkler on a post within the tree’s canopy. The post might be the same one that served as a training stake when the tree was planted. Here is a Nabal avocado tree with one such setup:

Second, if the tree is taller, then I hang a micro-sprinkler on a branch high up in the canopy. The sprinkler is suspended at a height only a few inches above the highest leaves.

I got this second idea from John Rowley of Nelson Irrigation up in Washington, where such overhead sprinklers are used for cooling apples, pears, and cherries. Rowley made a video showing how to make and hang such a sprinkler, and he shows the video at 2 hours 14 minutes into the presentation here at Index Fresh Seminar 23.

Here is what one of my designs looks like before it goes up into a tree:

I am still refining my design and use of these sprinklers hung in large trees as well as those mounted on posts, but I’ve been pleased with their performance in 2020’s September extreme heat as well as in this minor heat wave that just passed last week. Here is a short video showing the two methods in use in my yard:

The micro sprinklers shown in the video are Philmac Challengers. I’ve bought some of these in the past from Grangetto’s. On some of my other trees I use the pressure compensating micro sprinklers made by Jain, which I also find satisfactory, and which come in various outputs and diameter throws, and which I’ve purchased online from Drip Depot. (These are some of the same micro sprinklers that I use for under-tree irrigation, by the way.)

At what temperature to use overhead watering / evaporative cooling?

When do avocado trees need to be cooled? I wrote about this in detail in my post, “Protecting avocado trees from heat.” The short of it is that, in my experience, healthy trees only get damaged when the temperature reaches between 100 and 105.

But in June and early July (late spring and early summer), avocado trees can be carrying very small fruit which is especially susceptible to being shed due to heat stress. Therefore, at this time of year I will run my overhead sprinklers to cool certain trees at around 100 whereas later in summer I don’t bother unless it’s at least 105.

For example, last week on June 15 it reached 102 in my yard so I ran the overhead sprinklers (and sprayed certain trees by hand) throughout the afternoon. (My Reed not only has tiny fruit but is also still blooming!)

In a recent seminar put on by the California Avocado Society, titled “Mitigating Heat,” a few commercial growers mentioned that their temperature thresholds are similar. One grower in Fallbrook said he turns on his overhead sprinklers at about 100 sometimes, and always if it reaches 105. Another grower located in Ojai said he turns his overhead sprinklers on a bit earlier, at between 95 and 100.

How long and often to use overhead watering / evaporative cooling during high heat?

There are two ways one can use overhead sprinklers for evaporative cooling: continuously or in cycles. Some growers simply turn the system on at around 11 AM or noon and run it continuously until the heat subsides at around 4 or 5 PM. This is what I do with my micro-sprinklers mounted on posts or hung in trees.

Alternatively, the trees can be wetted down, allowed to dry, and then wetted again. Repeat the cycle. This is what I do when I spray trees by hand with a hose. I try to hit the trees with water about every 30 minutes, depending on how hot it is.

This cycling can save about 50% in water, a big savings if you’re watering hundreds of acres.

In order to run the sprinklers in cycles like this you need the right automatic timer and you also need check valves behind each sprinkler or else you will lose a lot of water to drainage at the low elevations during each off period.

For my situation (not having these requirements) it is more efficient to simply run the overhead sprinklers continuously all afternoon, and it doesn’t use as much water as you might think. For example, on my Hass tree that is about 15 feet tall I have an overhead sprinkler that puts out about 10 gallons per hour. Running that from 11 AM to 4 PM means applying 50 gallons of water. Water in Southern California costs about one cent per gallon so that’s about $0.50.

When you consider that I might have saved dozens — even hundreds — of avocados on that Hass tree from dropping by applying $0.50 in water, it’s unquestionably worth the money.

Cooling your avocado trees by sprinkling them is not the only way of mitigating heat, and it’s not always the best way. Erecting shade is usually the best method for small trees, for example.

Yet for big trees, there is often no option other than evaporative cooling. And by using this method in a timely and well-designed manner, we can get trees through the few days during those occasional extreme waves of heat that have been hitting us since avocados were first grown in California.