The New Year’s 2015 Freeze Damage and Its Lessons

The low temperature at the Ramona airport on New Year’s morning was 25 degrees, one degree above the record low. The temperature sensor under the eaves of my porch bottomed out at 30 degrees. (The porch’s shelter keeps it a couple degrees higher, but we’re slightly uphill from the airport, keeping us slightly warmer as well.)

January 2 was a low of 30 degrees on my porch again, and there was frost all over. January 3, frost. January 4, frost. I expect it every morning now, I wrote in my notes. Where do I live?

In the end, between December 26 and January 4 there was frost on seven of the ten mornings. What a spell!

Who did it hurt?

Every leaf on my four banana plants was killed — though the stalks of the plants were still fine, as evidenced by green inner leaves emerging two weeks later.

Foliage on my three passionfruit vines were all affected in the same pattern: the leaves touching the ground were killed, and the leaves at the top of the chain link fence were killed, while the foliage in the middle remained green and largely unaffected. The coldest temperatures must have been on the ground, as those leaves burned first, and then the leaves at the top burned next but protected the foliage underneath them with just a degree or two of reduced heat radiation.

What I really worried about through the whole freeze was my avocados. Yet I chose not to protect them because I wanted to see how they would fare naturally. It is said that the older and healthier they are, the more cold tolerant avocado trees are, no matter which variety. I saw this principle play out in the case of my Pinkerton and Fuerte. The Pinkerton is slightly younger (in the ground 10 months) and less healthy (due to insufficient watering during the 100-degree heat spell of late summer), and as expected it got damaged the worst. It had all side branches except for one killed back to the trunk; the one survivor was located low on the trunk. The top few inches of the trunk were also killed back, looking water soaked within a couple weeks after the freeze. 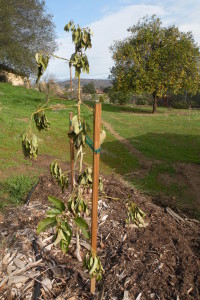 The Fuerte stands only seven feet from the Pinkerton. The Fuerte is slightly older, having been in the ground for 14 months, but it went into the freeze much healthier, with a full canopy of almost zero tip-burn. It came out of the freeze with the new leaves at the tips of a handful of upper branches killed — no twigs, no entire branches defoliated like the Pinkerton. 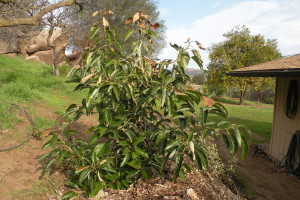 A couple weeks after the freeze, the Pinkerton looked like a stick with dead leaves hanging from it while the Fuerte looked like a full-canopied tree with a few brown leaves on its tips. I’m aware that the Fuerte variety is said to be more cold tolerant than the Pinkerton generally; however, such a discrepancy in tolerance to the freeze here is very unlikely due to only variety.

My other avocados are Hass, Sir Prize, Lamb, and Reed. The Reed proved most sensitive of these. It lost groups of leaves and twigs back a few inches. The other trees merely lost a few leaves or, in the case of the Lamb, not a single leaf. And so, the Lamb showed itself least sensitive to cold among these four varieties.

Other than the Lamb avocado, what was undamaged in this freeze? Citrus. Neither fruit nor foliage showed any effects from the cold in the Valencia orange or Bearss lime trees. 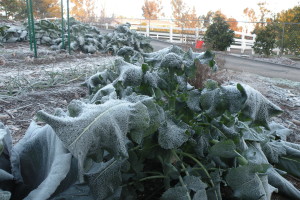 I take away two main lessons from this freeze event. One, don’t prune avocados in October. I had, and it encouraged new growth to flush in those early fall weeks which were still very warm, and it was that new growth that was nipped on every tree. Do all avocado pruning in the early spring only. And two, do grow more citrus. Despite this being a record-setting cold snap (even new growth on native live oak and laurel sumac showed cold damage), the citrus trees were unfazed. Even fresh new leaves on the Bearss lime showed no effects. I can say that in this yard citrus will be — extreme weather withstanding — a sure bet.