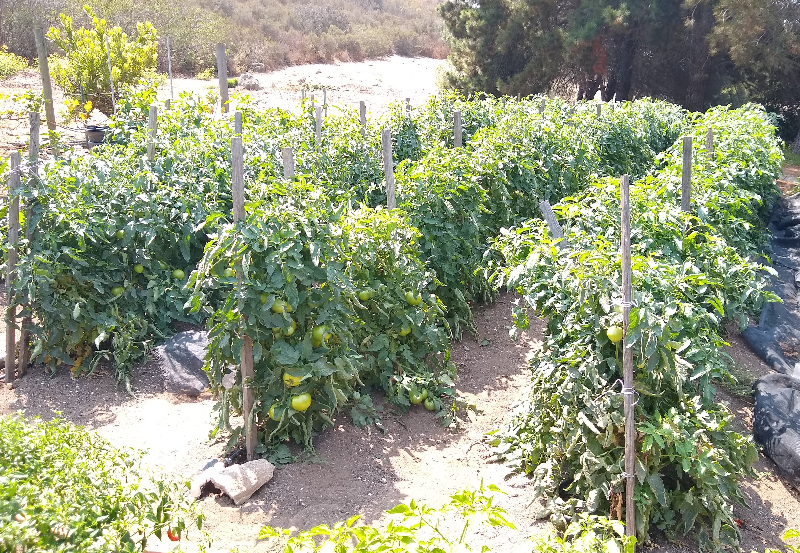 The first way you succeed at tomatoes is by having realistic expectations, which was the main point of my previous post, “Failing at tomatoes.”

The second way is by learning to manage the things that go wrong with your tomato plants and their fruit, and this is the topic today.

It is an unrealistic expectation to think that you can start a tomato plant in March and still have a green vine full of large, ripening fruit in September. If you plant five tomato plants in March, you might end up with one or two that still look good in August.

How to deal with that? If you want good-looking, productive plants all the way through the end of summer and fall, then you must plant new tomatoes around June. These are your fall tomatoes.

I visited a farmer friend on Tuesday. Roy Wilburn has grown thousands of acres of tomatoes in California and Baja since the 1980s. Today he farms in Poway, San Diego County. His routine is to plant a first round of tomatoes in January, then continue planting new rows about every month until his final planting in early July.

The photo at the top of the page shows some of Roy’s tomatoes that are currently in peak production. On the other hand, below is a photo showing a row from his latest, most recent planting (early July) next to an old row of tomatoes planted in the spring that he’s about to remove:

Bottom line: Accept that most of your early spring tomato plants are going to look rough and produce little in late summer and fall. Plant a second round of tomatoes for the latter half of the warm season if you desire green and productive plants then.

So many ideas float around about why some tomatoes get rotten spots on their bottoms. Researchers are certain that tomatoes with “blossom end rot” have less calcium than other tomatoes, but why that is and how to fix it is not always known.

My own best remedy is to grow varieties that are less susceptible. I’ve seen in my yard and elsewhere that some varieties get it much more than others. I’ve seen that San Marzano is susceptible to BER, for example. Others have observed that Better Boy and Big Beef are also susceptible.

Mountain Fresh seems to be rather resistant. This is one of Farmer Roy’s favorite varieties. I saw zero BER on his Mountain Fresh tomatoes this week.

But when I asked him how to avoid the problem, he said that in addition to variety choice, watering enough makes a huge difference. He thinks that it’s especially important to water enough when a fruit is early in development. This will allow the plant to take up sufficient calcium from the soil in order to build the cell walls of the tomato fruit.

My tomatoes have had more skin cracking than usual this summer. One time concentric cracks around the stems of some tomatoes appeared after I watered my plants overhead — an extra watering beyond their usual drip irrigation. This suggests that it occurred due to an expansion of the skin through the fruit taking in the extra water.

I’ve also had cracks radiate from the stems. I read that this can happen when temperatures are over 90 or the fruit is in too much sunlight. Not sure if this is true, but Roy pulls 30 percent shade cloth over his tomatoes whenever the temperature reaches 90 and he doesn’t get any cracking on his fruit.

Varieties also differ in their tendency to crack, I’ve seen. And Roy agrees with this as well.

Shading tomatoes at temperatures over 90 also prevents sunscald. The shading can be done with shade cloth (or anything else) if the plant’s foliage isn’t dense enough. Higher soil fertility or more water might help in growing denser foliage on a tomato plant that will shade its fruit.

If soil is infested with RKN, you should plant only tomato varieties that have resistance. The plant label or seed packet should inform you.

In addition, you can plant in a different spot in your yard or plant in containers (where the nematodes don’t exist).

Roy deals with root knot nematodes in his soil by planting resistant varieties of tomatoes and by applying beneficial nematodes to all planting holes. He uses Fungus Gnat and Root Knot Exterminator, which many independent garden centers stock.

I’ve found that an effective way to prevent mites from overtaking a tomato plant is to notice their presence early and then spray the foliage with water daily for a week or so. Mites like dusty leaves; don’t allow them to have that.

(See photos of tomato plants with mites and the other issues above in my previous post, “Failing at tomatoes.”)

Mites feed on leaves, but other critters love tomato fruit. It might be squirrels, rats, and who knows what else. If I see nibbled fruit, my main strategy is to begin picking the other fruit as early as possible. You can pick tomatoes as soon as they have any pink color and they’ll ripen well on the kitchen counter.

You might also try protecting the fruit with something, such as plastic bottles that are cut to fit and expand with the fruit. A fellow gardener and Yard Posts reader in Orange County has had success with this method:

And of course, you can also attempt to directly manage the animal that is eating your fruit, if you know which it is.

I have one plant this year that has zero fruit.

I have heard people say this can be caused by too much nitrogen fertilization, but I’ve never seen evidence for that. I’ve grown tomato plants in soil amended with heaps of manure and they made heaps of fruit. And the single plant that is barren in my yard this summer is in the middle of a row of tomato plants that are all producing.

A plant that drops all its blossoms is most likely just a variety that isn’t suited to your yard’s climate. Some tomato varieties won’t set fruit well when it’s hot, for example. If your yard is hot (frequently over 90 in the summer), then look for varieties that claim to set well in such conditions.

My yard is hot so any variety that has done well in mine is likely to do well in your hot yard. See these posts for some examples: “‘San Diego’ tomatoes,” and “Tomato varieties for Southern California, 2019.”

Finding varieties that are best suited for your yard’s exact conditions — and your gardening style and your taste buds — takes trial and error time, but it does pay off big in the long run.

After growing untold numbers of tomato varieties, Farmer Roy has settled on only two that provide high production of quality, large tomatoes in his location: Mountain Fresh and BHN 1021.

I just ordered seeds of those two so I can give them a try in my garden next year.