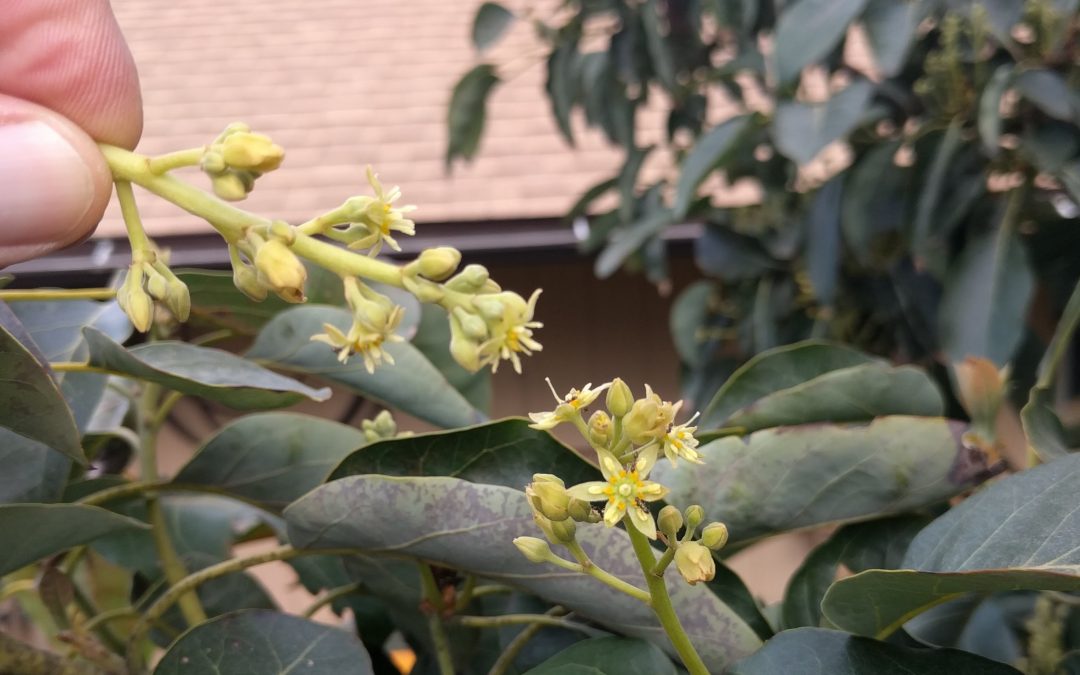 It was 95 years ago that J. Eliot Coit, who would later be called the father of the avocado industry, wrote the article “How to make the avocado tree bear.” In other words, we’ve always wished avocado trees gave us more fruit.

One way to encourage production is to be the bee. Avocado flowers are mostly pollinated by bees, but there’s nothing stopping us from using our hands and joining their pollen transfer party.

How can we hand pollinate avocado flowers? I’ve played with this for many years, but during this bloom season I’ve spent more time at it and learned better methods.

Or here is a close-up: 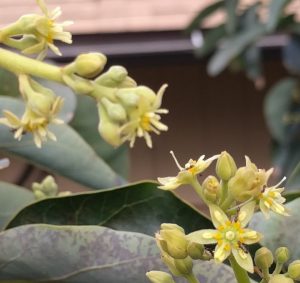 How do you know if an avocado flower is male or female? The female has a stigma standing tall and alone in the center of the flower while the male has many parts standing up, those parts being the anthers which release pollen.

To be specific, what you must do is use a male flower that is dehiscent, meaning the ends of its male parts (anthers) look tattered because they are releasing pollen. Male flowers are not dehiscent right when they open up; they start to release pollen after they’ve already been open for a little while. So pay attention to this characteristic.

Then you lightly touch the male flower to the female’s stigma — lightly because you don’t want to damage this delicate part. This will leave pollen grains on the stigma and — Voila! — we have pollination.

Before I go on to the second method of hand pollination, let me back up for a second and note that there actually aren’t male and female avocado flowers. All avocado flowers are the same in that they have both male and female parts. They open two times. On the first day they open and act like a female and then they close only to reopen the next day and act like a male. Strange indeed.

But as a shorthand, I’m going to continue talking of male and female flowers rather than saying something like “functionally male flowers.”

Please read more about the antics of the avocado flower in this article by Bob Bergh appropriately titled, “The Remarkable Avocado Flower.” 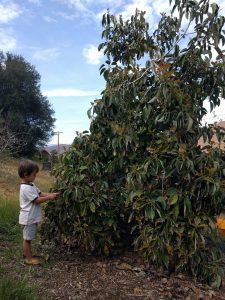 My son pollinates his Fuerte avocado tree with male flowers from a Lamb.

This direct contact method was found to be the most effective in a study of different hand-pollination methods on avocado flowers titled, “Optimization of controlled pollination in avocado” by M.L. Alcaraz and J.I. Hormaza.

Avocados are classified “A” or “B” according to the times of day they act like males or females. Some common A types: Hass, Reed, Pinkerton. Some common B types: Fuerte, Bacon, Zutano.

However, if you have only one tree or only trees of one type, then you have two alternatives. One, pick and store male flowers. As long as they’re used within a day, the pollen’s viability is said to only be reduced slightly. Best storage conditions are said to be high humidity (95%) and low temperature (39 degrees F). Think: crisper drawer of refrigerator. (See this article for details on avocado pollen storage and viability.) 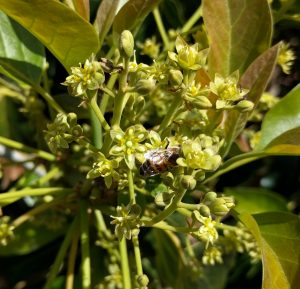 Be aware, of course, that when you remove a male flower you are removing a potential avocado. So this is only something you’d do if you had a large tree that could spare flowers or a tree whose fruit you didn’t particularly adore. Or if your tree produces some flowers right near the ground where you wouldn’t want fruit to grow anyway, then just pluck those off.

In the case of the Fuerte tree that my son is pollinating above, I collected male flowers from my Lamb tree because my Lamb had an “off” year last year and is currently flowering like crazy so I am reasonably sure it will set tons of fruit — more than it can hold until maturity — and won’t miss the handful of flowers I’ve taken.

A slightly less effective method of hand pollinating avocado flowers is to use a tool to gather pollen from male flowers without actually removing the flowers. Many tools can be used, but most people use small paintbrushes. I’ve found that one of my wife’s makeup brushes works well. (Shhhh. She doesn’t know.) I’ve also used a Q-tip. But my favorite is a small stick that I wrap in cobwebs. I just spin the stick in a spidery corner. And when I brush it against a male flower the cobwebs have almost a magnetic attraction to the pollen. It seems to work very well. 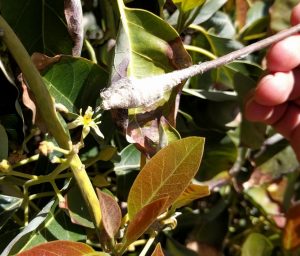 Collecting pollen with my cobweb stick.

Anyhow, you brush a male flower to gather some pollen on your tool and then brush the pollen off onto a female’s stigma. Again, do this during the overlap time mid-day, or if you must wait for female flowers to open, then the pollen should still be viable.

I’m not selling this idea. Hand-pollination of avocados is not a solution for a poorly bearing tree. Farmers don’t go around hand pollinating in their orchards, and Coit did not advise us to hand pollinate back in 1923. But for us home gardeners there are a couple of situations where hand pollinating might be worth the effort.

My Fuerte tree is far from my other avocado trees and so doesn’t benefit from cross-pollination opportunities. The Fuerte variety in particular is known to bear erratically, especially if it doesn’t have an opposite flowering avocado tree nearby. By doing some hand pollinating, I can fill that gap.

If you have a young tree of a variety whose fruit you’ve never tasted, then you may want to hand pollinate in order to get a fruit or two as early as possible. 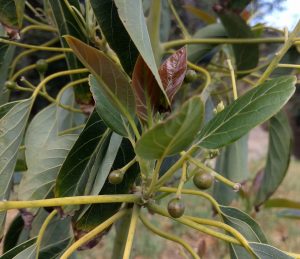 Avocado fruitlets on Gwen variety. This is what we want to see!

But don’t have unrealistically high expectations. Avocados on their own are inept at turning flowers into fruit, with a success rate of less than one percent. (See page 33 of Gary Bender’s Avocado Production in California for more on this.) A large avocado tree with a million flowers usually only turns out a couple hundred fruit in one year.

And through hand pollination the success rate only inches up. For example, one experiment found a success rate of between three and eight percent, depending on the variety of pollen used. In other words, out of one hundred female flowers that received hand pollination, only a maximum of eight turned into fruit. (See the study: “Selection of potential pollinizers for ‘Hass’ avocado based on flowering time and male–female overlapping” by M.L. Alcaraz and J.I. Hormaza.)

But it doesn’t take very long to hand pollinate one hundred avocado flowers. It takes maybe ten minutes. And if I get even two Fuerte avocados for ten minutes of handiwork, well, that’s not a terrible wage.