How tall can dinosaur kale get? 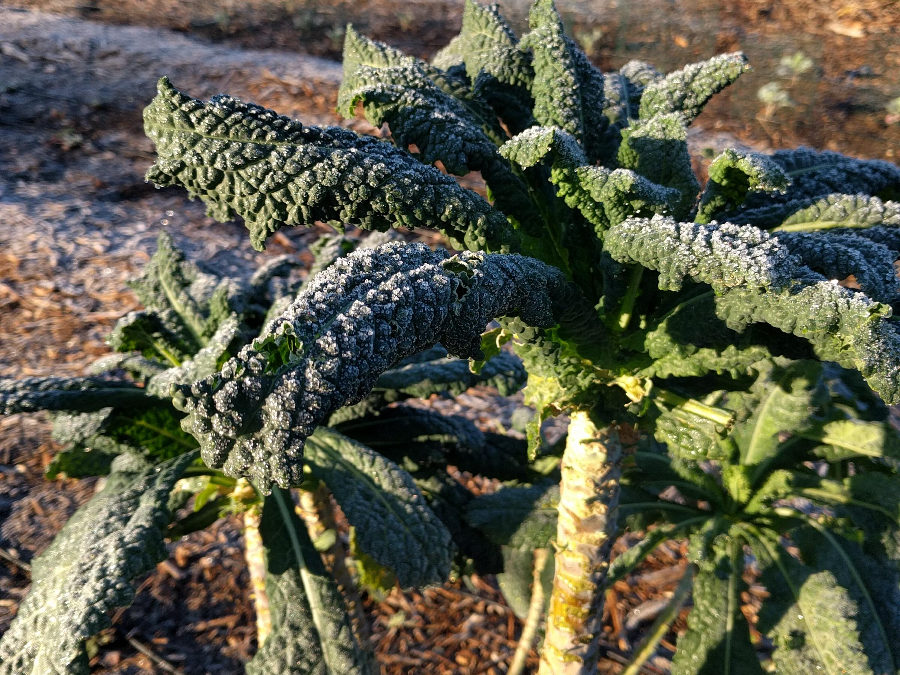 Next week my daughter turns four, and so does one of the above kale plants.

It was in December 2017 that I sowed a handful of kale seeds. We ate leaves from the plants that grew through that winter while my daughter was learning to open her eyes and recognize her siblings. Some of the plants continued growing well through the spring and summer too. When they all turned one, I took this picture:

Then the kale plants succumbed to infestations of aphids or ended their lives naturally by blooming and making seed — except for one.

I started to think of this surviving kale plant as special since it was the same age as my daughter. Then a strong storm came through and blew it over. I thought it was a goner, but I staked it back up and it recovered. I took this photo of the two two-year olds:

The plant is a type of kale often called “Dinosaur” kale because the bumpy leaves resemble the imagined skin of dinosaurs. But it also goes by many other names: Lacinato, Tuscan, Italian, or Black kale.

At some point every year, Reeve’s dinosaur kale plant harbors lots of aphids, but my style is to let nature take its course and so I allow predators like lady bugs and birds and parasitic wasps to eat or utilize them, and the seasonal aphids always eventually vanish.

Reeve could no longer reach any of the leaves on her kale plant last year. The highest leaves reached seven feet tall.

And the plant keeps growing. Having been a fixture in the yard for four years now, I don’t always notice it anymore. Visitors point it out though.

“Oh yeah, that’s actually a kale plant. It’s many years old and just keeps growing, up and up and up.”

“Sometimes, but most often I pick its leaves for our chickens.”

Just last month I ate some of its raw leaves with some visitor friends. They were not as tender as baby kale, but not fibrous or bitter either.

Why is this one kale plant so tough? Why won’t it flower? How long will it live? How tall will it get?

Here in December of 2021 it is four years old and measures 96 inches. That’s eight feet tall!

Right now is a great time to plant some kale, by the way. Check out my post, “Growing greens in Southern California.”