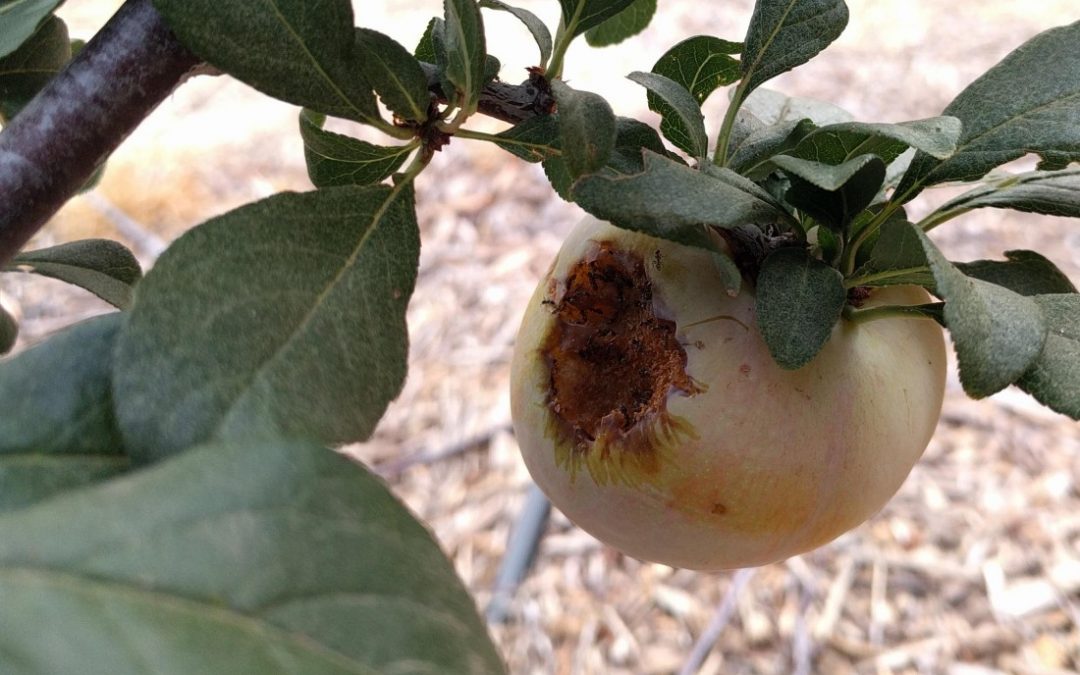 Up until this summer I’d always shared with the birds. Their pecking the first ripe apricots was like a beacon showing me it was time to start picking. I almost appreciated it. And then they ate some nectarines and we ate some nectarines; there was plenty of everything in the yard to go around.

Not this year. The pluots barely set any fruit. We couldn’t afford to share grapes with the birds (and then the ants that follow). I had to protect what little harvest there has been in this craziest of years. Throughout Southern California, it was a warm and dry winter followed by the hottest of summers.

I tried to protect our fruit from the birds using a method suggested by Carmen Gispert, a University of California viticulture and pest management advisor. Last summer, I took her class on grapevine management, where she mentioned that netting whole vines doesn’t work very well, but bagging individual clusters with net bags like those made for lingerie or fruit does.

This June I gave the method a try on apricots first. My mother-in-law had given us reusable mesh bags for produce made by a company called Earthwise a couple years ago; they seemed to be the type Gispert recommended. They are made with tough polyester mesh, tight enough that birds can’t peck through, yet still breathable.

Zero bird damage occurred on any of the covered apricots. Then I transferred them to some clusters of grapes, which came through July with no bird damage except to a few grapes at the top of one cluster because I hadn’t cinched the top completely. 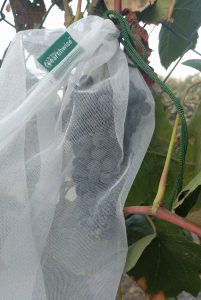 So after the grapes were all harvested, I put the bags on our nectarines. No bird damage.

But I didn’t have enough bags to cover my peaches at the same time. Rather than buy more, I experimented. I cut swatches of the fabric that had been stapled to the bottom of a box spring. It’s more gauzy and less like a tough tight-weaved net. In fact, it’s very similar to the fabric used as a row cover for vegetable crops. Maybe it will still work? 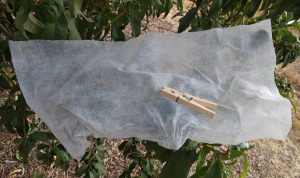 Birds perch on a branch and peck at a fruit’s top or upper sides, I’d noticed, so I made sure to cover those areas completely, fastening the fabric onto the branch with a clothespin. 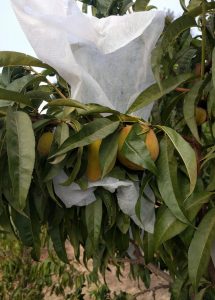 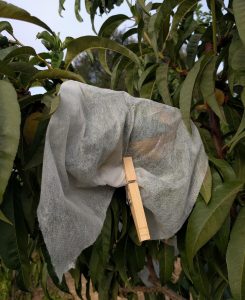 Wrap the peaches over the top and fasten at bottom.

This has worked, but not as well as the polyester mesh bags. Mysteriously, I’ve found a few peaches on the ground, pecked, and spoiling. I’m not sure how it has happened.

At least most of the crop has come through undamaged although the one downside is that the peaches don’t color up as well since they’re not receiving as much sunlight.

Bagging compared to other methods of protecting fruit from birds

Why don’t I just net whole trees? I can’t say for sure because I’ve never done it, but the reason I’ve never even tried it is because I’ve talked to a hundred people who say it’s annoying at best. It can be fairly effective (except for any outer fruit that is touching the net), but you’ve netted yourself out of the tree just as you’ve netted the birds out, and you also have to frequently adjust the net or else you get new branches growing into the netting.

Because of this, it’s recommended to build a structure to hold the net over the tree. See a photo of such a structure here. But that’s farther than I’m willing to go to protect fruit from birds.

But what I have tried is a hybrid of bagging individual fruit and netting a whole tree. I’ve wrapped branches or sections of a tree in tulle fabric, which is basically the same fabric used to make reusable mesh bags. 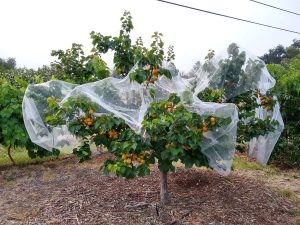 This has worked well because the mesh is fine enough to prevent branches from getting stuck in it, you can place the tulle fabric around the branches without needing another person’s help, and it is easy to access for fruit harvest. If the fruit quantity on the tree is high, this method is a winner compared to bagging fruit.

The tulle fabric I use was bought from Papermart, and it is called “Economy Colored Polyester Tulle in Bolts.” I bought a bolt 108 inches wide by 50 yards long for around ten dollars.

And how about those reflective strips you can hang in the trees? Never tried them, but what I do know from other deterrent-type methods is that they are only briefly effective. One of the kinds of birds I’ve got pecking my fruit is the scrub jay. Scrub jays are smart. I can’t imagine them being deterred by a reflective strip for more than a day. But I don’t know for sure. Do you have different experience to share?

Downsides of bagging fruit for protection from birds

Before I bagged fruit this year I’d thought it would be discouragingly time-consuming. It wasn’t too bad. But I keep my trees pruned short — to the height of my reach. For a big tree or for a tree with a heavy crop, I’d only bag lower fruit or use the tulle fabric to wrap entire branches.

I’d also thought that bags would be more costly. They aren’t cheap, to be sure. The Earthwise bags I’m using cost just over $1 each. Similar bags made specifically for protecting fruit from birds and insects are about the same price. See, for example, these Agfabric bags and these Mazu bags.

A couple things to keep in mind about cost, however, are that the polyester bags will last many years, and you don’t need one bag for each piece of fruit on your trees. Even a small plum tree may carry 50 plums, but all don’t need to be protected at once because all don’t ripen at once. Also, these bags are big enough that I’ve used one bag to cover up four nearby pluots. 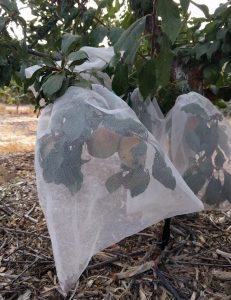 Multiple pluots in one bag for bird protection.

One very positive result of my finding a convenient, surefire way to protect fruit from birds has been that I can again see the scrub jays and finches and mockingbirds less as enemies and more as garden teammates. They really can be.

Ever heard of The Great Sparrow Campaign? I only learned of it a week ago. It was Chairman Mao’s attempt to deal with the sparrows that liked to eat the grains that farmers grew in China. This was back in 1957, and the campaign was successful in a Pyrrhic way.

The Chinese killed an estimated billion sparrows. This led to crops being plagued by insects that those sparrows were no longer keeping in check: locusts, for one. Crop yields declined. Ultimately, tens of millions of people died of starvation during this and related campaigns of Mao’s during the era.

This is a reminder to me that the various plants and animals of our world are linked, and dealing with a pest by sharing a little or using barriers like these mesh bags is usually preferrable to trying to eliminate the pest on a grand scale because that might imbalance a relationship that you hadn’t been aware of or had underestimated in importance, only leading to the proliferation of another pest. It’s a connected and complex natural world out there.