Should you get chickens? 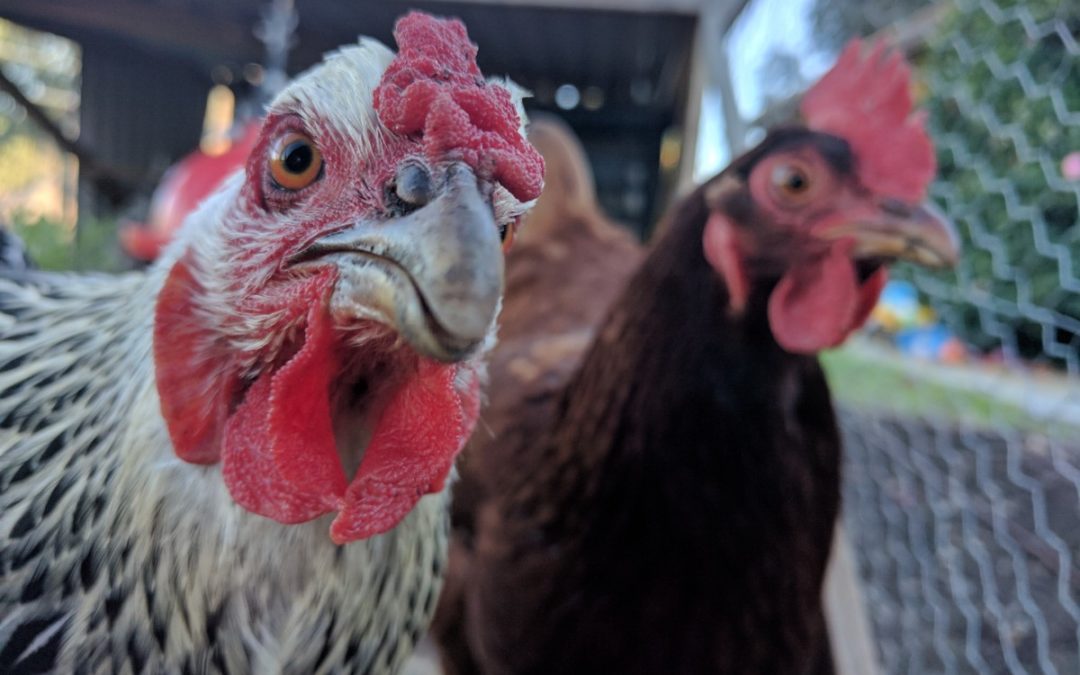 Our yard feels boring right now. For the first time in a few years there are no chickens running around. Should we get a new batch of chicks soon? Would you like to add chickens to your own yard?

Let’s take a pros and cons approach. What do you get out of having chickens, especially when you also have a vegetable garden and fruit trees in your yard? And what do you have to put in to get those benefits?

When I talk chickens in this post, I’m talking about laying hens (mature female chickens), and with these laying hens you have the potential of getting eggs. But more than just eggs, you can get the highest quality eggs in the world.

A chicken that eats a natural or close to natural diet produces eggs that are different from the eggs produced by chickens kept in warehouses or those with only a dirt yard to wander on. Chickens are omnivores: they eat blades of grass as well as grasshoppers, if allowed.

No need for lab analysis: as soon as you crack a homegrown egg, the difference glows in the form of a deeper orange yolk.

We kept our chickens in a pen for part of each day. Into that pen we threw our kitchen scraps, garden clippings (like old tomato plants), certain weeds (most anything without seeds), and certain bugs (like hornworms).

The chickens ate most of this “trash,” turning it into protein for us in the form of eggs. Isn’t it amazing that there is an animal that can take such discards and reform it into something for us to eat?

But the chickens also pooped in that pen, and continually scratched around, and incidentally transformed whatever they didn’t eat into a compost/fertilizer substance.

I used this chicken compost to fertilize my vegetable beds and young fruit trees, and I used it like a potting mix to grow all of my vegetable seedlings.

The compost and eggs that the chickens provided were much appreciated, but approximations of them can be bought. You can buy good compost, and you can find someone who raises laying hens in a healthy way such that they produce high quality eggs. But I don’t know what you could buy to replace the pest-control services of chickens.

Originally, I got chicks with the hope that they would control the large numbers of earwigs that were damaging my vegetable garden. It worked, or I can say, they worked. (See my post, “Chickens eat bugs in the garden.”)

Since then I’ve noticed some other insect pests that the chickens eat that would otherwise cause damage to my vegetables and fruit trees. These include June bugs on avocados. (See “Who is eating holes in your avocado leaves?”)

Our chickens have performed this pest control because we let them roam the yard often. A chicken in a stationary coop all day would not be able to do this. Also key to the ability of the chickens to eat insect pests was the mobile pen that I built for them.

PRO: Fun and didactic for kids

Like any other pet, chickens can be fun to have around if you have kids around. My kids loved picking something from the yard and feeding the chickens (greens, grapes, and pomegranates were among the favorites). Sometimes they herded the flock.

Unlike with most other pets, chickens help kids learn where food comes from. Sometimes we would be in the yard when a chicken was laying an egg. We watched until the hen stood up. Then I reached into the pen, picked up the egg, and handed it to one of the kids. They passed it around, noticing how warm it was and that it was wet; an egg comes out with a protective film on the shell that eventually dries and becomes invisible.

All of the above benefits of having chickens are beautiful, but they’re not free, not in terms of money nor time nor hassle. The most basic cost that comes with having chickens is providing food and water. The costs of bags of chicken feed and water themselves are minimal, and the eggs you can get will be worth more. It’s the cost in terms of time that I’ve found to be higher here, as you need to continually check on the chickens to make sure they have the food and water that they need. (This continues when you go out of town, of course.)

Chickens don’t absolutely need a home. You can let chickens roam freely all day every day, but there are downsides.

Four is that chickens are vulnerable to predators, even if you live in the city, and especially at night. Chickens can’t see in the dark. Over the years, we’ve lost only one chicken during the day (to a hawk), but more than one during the night to possums, coyotes, and I’m not sure who else.

This is how we lost our last chicken just the other night. I had been letting Rosie roam freely day and night since she was alone and she often refused to go back to the pen for the evening. She was an old and fairly wise bird. She roosted in a tree each night. I think she enjoyed that month or two of liberty until she vanished.

If you really want to keep your chickens safe, it’s best to buy or build a coop that predators can’t get into, and keep your chickens in there at night. As I’ve mentioned, we kept ours in a small, mobile pen that I built for about $100 dollars in materials. It is four feet wide by eight feet long by two feet high, and that 32 square feet was enough for a maximum of four happy hens at any one time.

Any chicken coop needs some kind of cleaning. The chickens poop all day and all night, and it quickly stinks unless you remove the poop or — and this is what I did — add material to soak it up. I added all of the “trash” that I mentioned above, and additionally I added wood chips. Being high in carbon, the wood chips are a wonderful complement to the high-nitrogen chicken poop. The wood chips bring the carbon-to-nitrogen ratio into the range that is ideal for micro-organisms to decompose it and do so without any unpleasant odor.

Either method — cleaning out the coop or adding carbon — requires work, and even my method of consistently adding wood chips requires eventually removing the resulting “chicken compost” since it builds up and raises the level of the ground over time.

I don’t like seeing animals in cages so I was always inclined to allow our chickens to roam the yard as much as possible. The downside of letting them roam, however, is the damage they cause in places like the vegetable garden, where they eat certain things (lettuce leaves, tomatoes, e.g.) and they scratch around and uproot seedlings and seeds.

I must note that chickens can be trained a little bit though. Mine rarely damaged the vegetable garden anymore after a year or two of discipline. We do have a large yard for them to continue hunting and pecking in though so I doubt such a result could be obtained in a small yard.

Among the fruit trees, the chickens are highly attracted to mulch, and with good reason. That is where the insects and worms are hiding.

You get the benefit of them eating many pest insects, but you pay for it in mulch that is spread all over the place.

Should you get chickens?

Where does this leave us? Should you get chickens? Of course, I can only answer whether or not I should get chickens, again. For me and my family, the pros continue to slightly outweigh the cons. We eat a lot of eggs, we use a lot of compost in the yard, I need the pest control of the chickens, we have easy access to plenty of wood chips for the pen, and our kids are still young and have a lot to learn about the birds. Plus, as they get older they can take over more chicken chores!

An endnote to this discussion is that it might be irrelevant. There is a quarantine on chickens in much of Southern California because of the presence of Virulent Newcastle Disease, meaning that for almost a year now it has been diificult or impossible for many to get chicks. I’ve actually been trying to get chicks to replace our old birds since the beginning of 2019.

The good news is that the latest update from the California Department of Food and Agriculture says that we are now in the “Freedom of Disease” phase, which means that I might be able to get chicks soon . . . and you too, if you decide you should.

(Update: Bummer! Right after I posted this, the CDFA announced new findings of VND in San Bernardino County.)