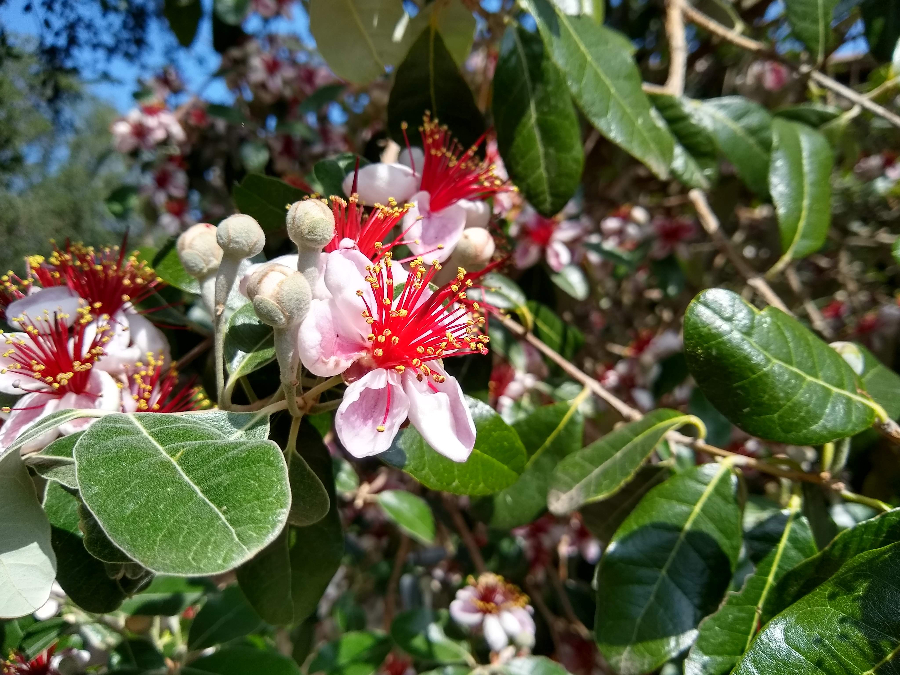 This week I was in the kitchen while my three kids were at the dining room table and I overheard this conversation.

Reeve (four years old): “Broccoli is not a flower.”

Cass (eight years old): “It is. You know all the little balls on top? Those are flower buds.”

Miles: (calls to me) “Dad?! Reeve doesn’t believe that broccoli is a flower!”

Regardless of Reeve’s beliefs about broccoli, she is just like her brothers in that she cannot pass by the pineapple guava tree without stopping to feast on its flowers.

Here in early May there are still enough that they can reach from the ground or by climbing up on a nearby boulder, but each spring at some point I park a ladder by the tree and they argue over whose turn it is to climb the ladder to pick the high flowers.

If you know how to pick them, then you look for ones with petals that are thick. You can eat them straight off the flower or pull off individual petals and pop them in your mouth. But it’s hard not to squish the delicate petals if you choose that method. Then again, eating the petals right off the flower results in your face being dabbed with yellow pollen from the protruding stamens. The price you pay.

Are you familiar with pineapple guava? Its botanical name is Feijoa sellowiana (also called Acca sellowiana) and many refer to it as feijoa. It comes from South America but is very well suited to almost every corner of California. (See a photo of a beautifully formed pineapple guava tree in Carpinteria in my post, “Posts from other yards, 2021.”)

They produce fruit, and there are many named varieties of pineapple guava which produce superior fruit. The fruit are generally ready for harvest in the early fall. However, we rarely get more than a handful from our tree because I don’t water it.

Why should I? It still produces an abundance of flowers each spring, and the kids like the flowers more than the fruit.

Check out some more historical and cultural information on growing pineapple guava from the California Rare Fruit Growers.

Thanks to all Supporters for powering The Yard Posts and keeping it ad-free! Learn how you can become a Supporter HERE